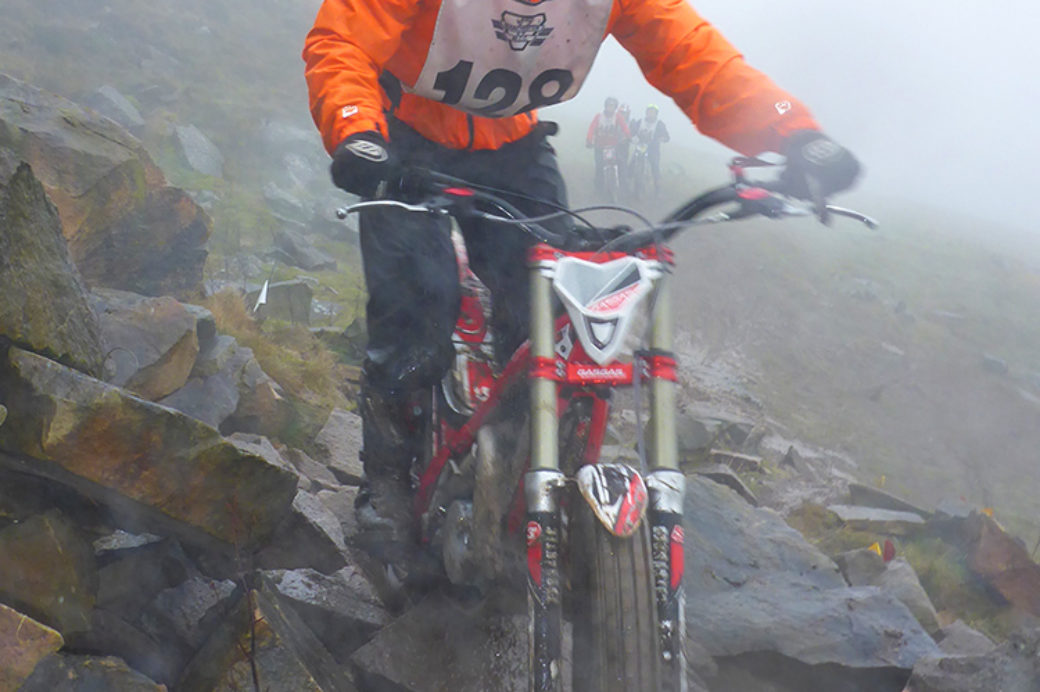 It was a good job that Manchester 17 had a new venue for their Fisher Trial – the opening round of the Cheshire and North Wales 2017 Trials Championship.

The usual Hawks Nest venue is as high in the Hills of the Peak District as it possible to get and was not only covered in snow the day before the event but then flooded in Sunday’s continuous heavy rain to add to everyone’s difficulty.

That said quick changes to the course were needed to save the event in Pott Shrigley as the river rose to over four-feet deep and the five sections plotted disappeared under the deluge and thick hill fog.

So instead of three laps of 15-sections the Manchester 17 team organised ten sections and four very wet laps.

Even though the weather was as bad as predicted almost 100 riders arrived for a day out at a traditional northern rock (and more rock) tough Centre Championship Trial, which even made finding places to park over 100 vehicles in that weather a challenge.

So two groups set off at 10am to find their way around a much reduced ten sections grassed-over long disused quarry in thick fog and continuous rain.

Section one seemed easier for the Hard and 50/50 riders than the Easier course as they rode up a grippy bank and current Cheshire Over 40 champion Matt Treweek lost two of his total of six here.

Section two featured a ride over and around exposed boulders; it was more of a struggle for the 50/50 route, where they did the Harder route and only Anthony Brown managed all cleans here.

Tim Pearson was the only front-runner on the Hard route to find this one-dab grabber – taking three singles and a clean.

Section eight was accessed directly after a long river route had been pulled and was among the easier sections. There was shelter from the wind behind a rock face, which was climbed in a corner by the Hard and 50/50 riders and skirted by the Easier course.

Number ten with its loose scree and big angled rocks cost Chris Alford the win with a stop on his second visit. Matt Treweek took a couple of singles on the Easier route and Hoyle, Waz and Shaw all manage to take single two’s at various attempts.

Only Sam Yeomans and Lancashire visitor Jack Spencer managed all cleans at the section 11 with its big step on a banking for the Hard route, while the 50/50 and Easier route diverted around the six-footer.

At the section 14 which remained grippy all day Chris Pearson took the Electric Motion clean here able to seemingly hover in position without disturbing the loose stuff.

At the last section the Hard route dived between two bike size rocks in the bottom of a small valley exiting over a flattish pile of big rocks. With plenty of grip there were some spectacular cleans with only current centre champion Mark Atkinson not recording a clean, although he did manage three single dab rides.

The Easier route avoided the rock strewn valley and stuck to a narrow path directly under the quarry face giving the majority of riders a clean to finish on.