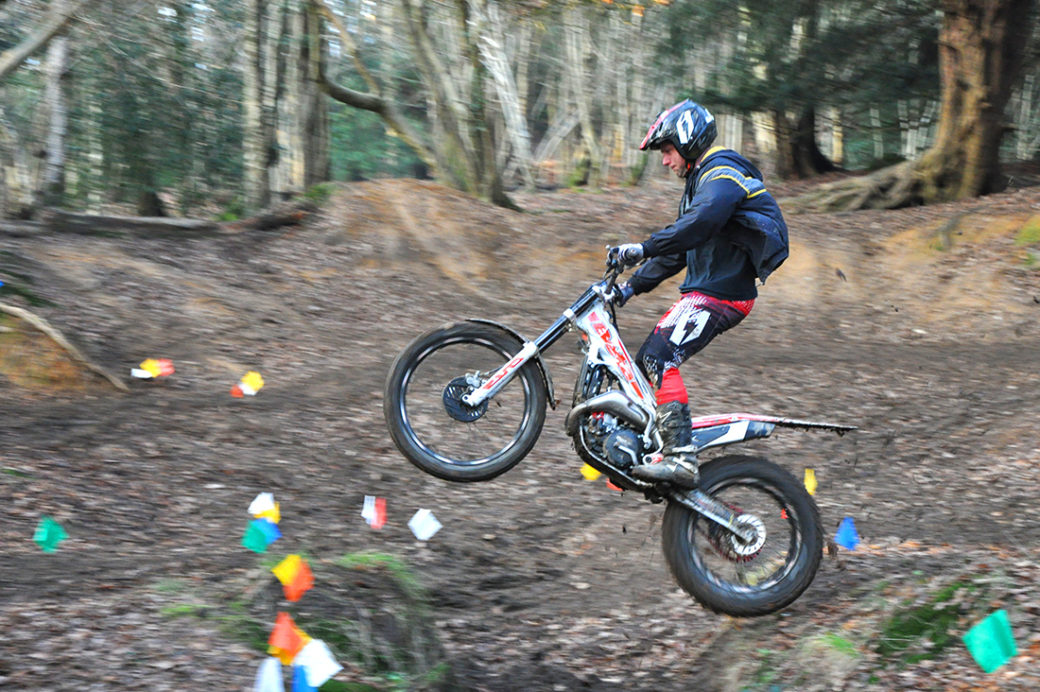 Waltham Chase produce ten testing sections at the first round of the club championship at Hut Hill in Hampshire. The icy hard surface made many of the 75 entrants slow to start and tentative, as grip was hard to come by.

Mike Graves on his 300cc Beta made a steady start and put in a stellar performance winning the Expert class by 20 marks.

He improved lap by lap losing only four marks on the last including a really impressive clean on section nine where two jumps over a muddy ditch were needed in a very long section.

With similar terrain to the next week’s Talmag trial this was an ideal opportunity for some exotic machinery to be given the final shakedown.

Echoing through the trees the sound of the Triumph was music to the ears as it powered up the climbs of section six. Peberdy confessed that the power on the 500 needed to be ‘turned down a tad to get it into shape’.

Mark Parry Norton produced acrobatics on his Ossa to finish an impressive third.

On Route B, Lee Wildsmith was a clear winner from Chris Brawn with Simon Rye on a Beta taking the Vet B class.

Stepping up to B for the first time Oli Gray produced an excellent performance to finish second behind Zak Whalen by three marks.

Tony Billingham retired from Twinshock B, it is rumoured to be swapping his TY250 for a TY80 after falling off a narrow ledge into a large pool of water, the TY80 tyres being narrower should give him a better chance to complete the trial.

He only lost eight on the final three laps to take the class on the number of cleans.

Charlie Tindle brought his B40 BSA for a Talmag shakedown, the beautifully prepared machine took Tindle to Twin-shock victory with only ten lost ahead of Mike McKenzie on his Ariel Arrow and Malcolm Webb on his BSA Goldstar.

Tony Knott on his Montesa took the highly competitive Veteran C by five from a similarly mounted Paul Rogers.

Max Gray did manage to complete the E route losing only 38 in the process.