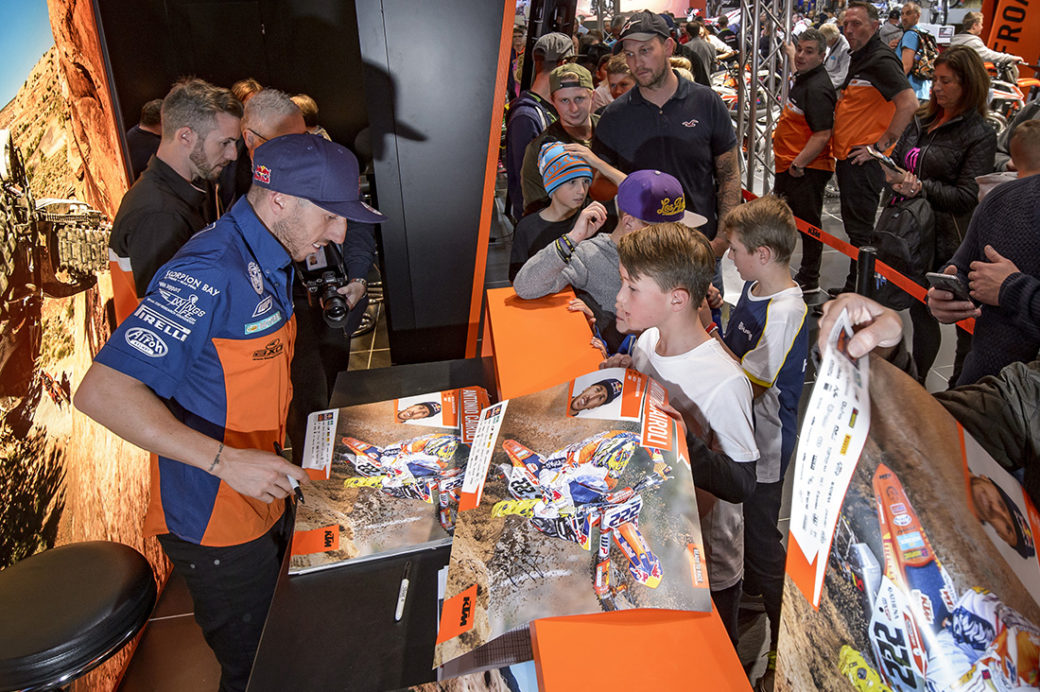 I don’t know what it is about the International Dirt Bike Show but pass through the doors and time just seems to accelerate.

In a matter of minutes, four days have flown by and at the end of it all you feel about 15 years older. Weird, huh?

To try and trick the Stoneleigh time warp – and halt my own worryingly fast aging process – I only attended half of this year’s show.

As is the norm that wasn’t nearly enough time to see everything and speak to everyone I wanted to so apologies to anyone I missed and commiserations to everyone I did manage to catch up with.

Thursday was all about business for me but when I returned on Saturday with ‘duh boyz’ we went and had some fun in a secret shopper type stylee – that’s after I’d finished chatting the socks off Tommy Searle for an hour or so ahead of a future feature in DBR.

Anyhoo, after they’d finished watching the Wall of Death show we queued patiently so Jake and Noah could take a spin on the Kuberg E-Bikes before they had a blast on the quads and we checked out the Minibike Supercross.

After that we hit the sales halls and unsuccessfully hunted down something for mum – who’d stayed home for the day – then they dragged me round Hall 2 sitting on every bike they could and poking at anything they couldn’t.

Considering it’ had cost them nowt to get in – under 10 you see – they had a grand old time and spoke very positively about their experience for a good few days after.

One thing that struck me on my travels was A) how busy it was and B) how much cash was changing hands in the trade hall which I suppose has always been the case at Dirt Bike Shows through the ages.

I hate to think how much I’ve handed over through the years, although however much it was it was obviously money well spent.

After all it’s a scientifically proven fact that it’s absolutely impossible to waste money on dirt bikes, dirt bike clothing or any other type of dirt bike paraphernalia no matter what your non- interested partner thinks.

With that in mind – and with Christmas on the horizon – it’s definitely time to be thinking about what purchases you might be making next.

I know that if I weren’t a broke-ass journalist with a broke-ass ass I’d be totally ordering my electric-start 2017 CRF450 right now along with some of those Sidi Crossfire 3 SRS boots, some retro JT Bones kit, a new camper and a day van, erm, a fresh Bell, Arai, Shoei or two, some goggles – definitely – and then maybe a trials or enduro bike for winter training. Or why not one of each?

Of course, unless you’ve won the lottery a shopping list of that magnitude is way out of reach for most of us – even at super special Dirt Bike Show prices and especially at full RRP.

But as much as we all want that kind of stuff in our lives please be aware that with a spate of thefts from the industry of late there is a certain amount of red hot stock doing the rounds.

So if you’re offered something brand new at a massively knocked down price it’s well worth checking with the appropriate importer if they’ve lost a shipment of whatever.

As well as saving you some embarrassment, it may also save you  a visit from the police and ultimately  some of your hard-earned cash too…