The Arenacross Tour fired up The Resorts World Arena, Birmingham this evening with an action-packed full-throttle three hours of sporting entertainment, with unscripted and epic indoor motocross racing across all classes.

The world-class Fix Auto Freestyle crew virtually hit the arena rafters in their attempts to earn the applause and approval of the cheering West Midlands crowd.

The fun and games were in full swing way before the engines started though, with enthusiastic fans queueing in the Arena foyer to meet and greet the AX racing and FMX stars and grab an autograph, whilst eager gamers were quick to have a shot at setting the fastest Monster Energy Supercross 2 lap and winning a place on the ‘live’ interval race on the big screen.

FRO Systems’ multi-national team played a major role in the Arenacross racing storyboard tonight. A Welshman in the form of Ashley Greedy won the Head-to-Head and then went on to lead the Main Event Super Final. A German – Nick Thury – won the Last Chance Qualifier and a Frenchman, Cedric Soubeyras, made history by becoming the first 250cc rider to win the Super Final Main Event.

The first-half action witnessed Soubeyras keeping a hard-charging Valentin Teillet (SR75 Suzuki) at bay in the Pro Lites Main Event and, over in the Pro 450 class, Shocktech Kawasaki’s Fabien Izoird brought a halt to the winning streak of Team Green Kawasaki’s Greg Aranda. The UK’s Jack Brunell (Team Green Kawasaki) showed incredible form, holding a strong second behind Izoird, and he looked on target to take that position to the finish line when an unfortunate crash ruled him out of contention and the race was red-flagged.

In the second Main Events, Teillet led the early part of the Pro Lites race, making Soubeyras work hard behind him. Once past though the reigning AX Pro champ pulled away, leaving Teillet and Adrien Escoffier (Buildbase Honda) in second and third. The Pro 450 action saw SR75 Suzuki’s Charles Lefrancois take the holeshot and lead, with Aranda close on his rear wheel. A valiant ride from Wooldridge Demolition’s Matt Bayliss saw him battle hard in third and was only bettered by Izoird in the closing stages. A fourth in the race and overall meant the British rider was spared the agony of the Head-to-Head eliminator and Last Chance Qualifier (LCQ).

Greedy stunned the packed arena when he not only grabbed a massive holeshot in that Main Event Superfinal but went on to lead Europe’s best Arenacross riders for a good six laps before being taken by Escoffier. At around half-race distance, Soubeyras and Escoffier were side-by-side and on equal terms before the clashed and Soubeyras went on to keep a closing Aranda behind him and take the victor’s spoils with four hard-charging 450cc riders behind him.

Commenting on his team’s performance, FRO Systems boss Mark McCann said; “It was something of a roller coaster ride and I’m proud of them all. Ashley amazed everyone by taking the holeshot and then going on to lead convincingly for a while. Cedric was simply superb.”

Prior to the Pro excitement, Luke Dean won the newly-introduced and hard-fought Pro-Am class on the night and took the overall ahead of Luke Bull and Trystan Williams.

In the youth ranks Ben Clayton was unstoppable in the Rookie class cleaning up in every third-round session to take the class overall and extend his championship lead to 86 points ahead of Josh Greedy on 70 points. Raife Broadley put in a blinding last turn move on Ethan Sills in the Team Green Supermini Cup to take a double-moto win and claw back the championship lead from Alfie Jones. And, in the Youth 65 Cup, Freddie Bartlett made a stunning comeback to win the second race by over six seconds ahead of overall winner Isaac Ash and new championship leader Zane Stephens. 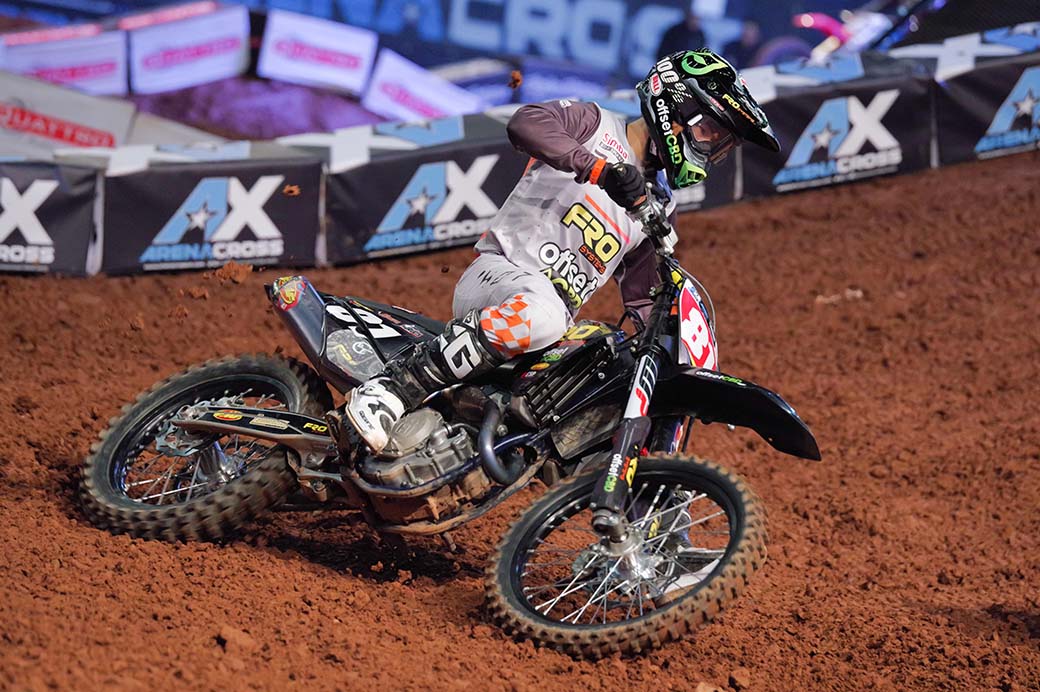 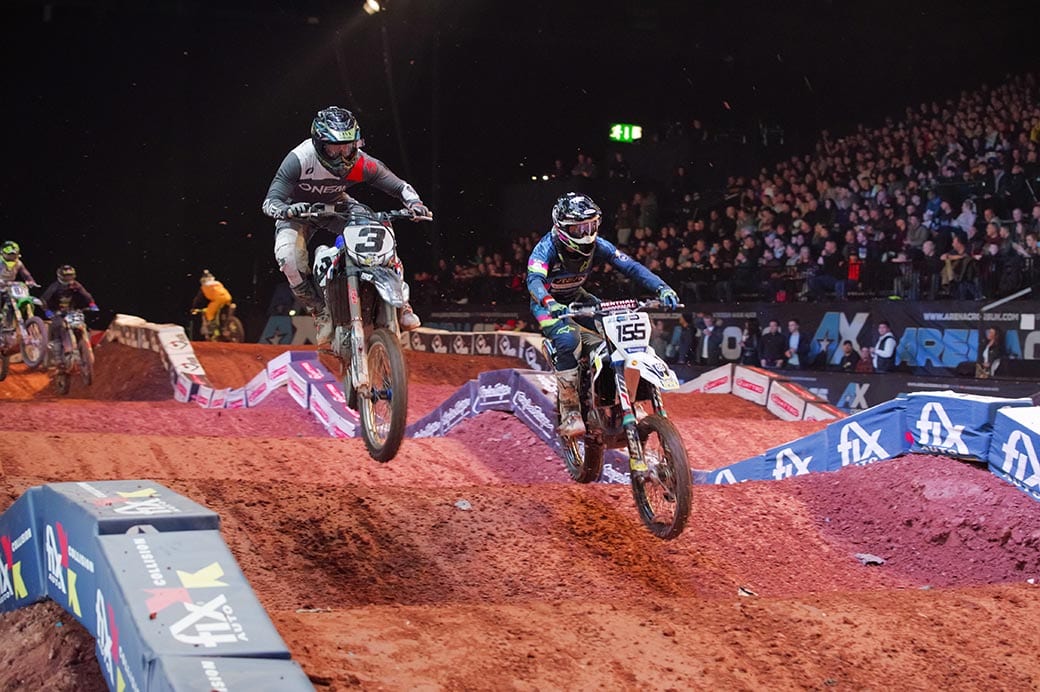 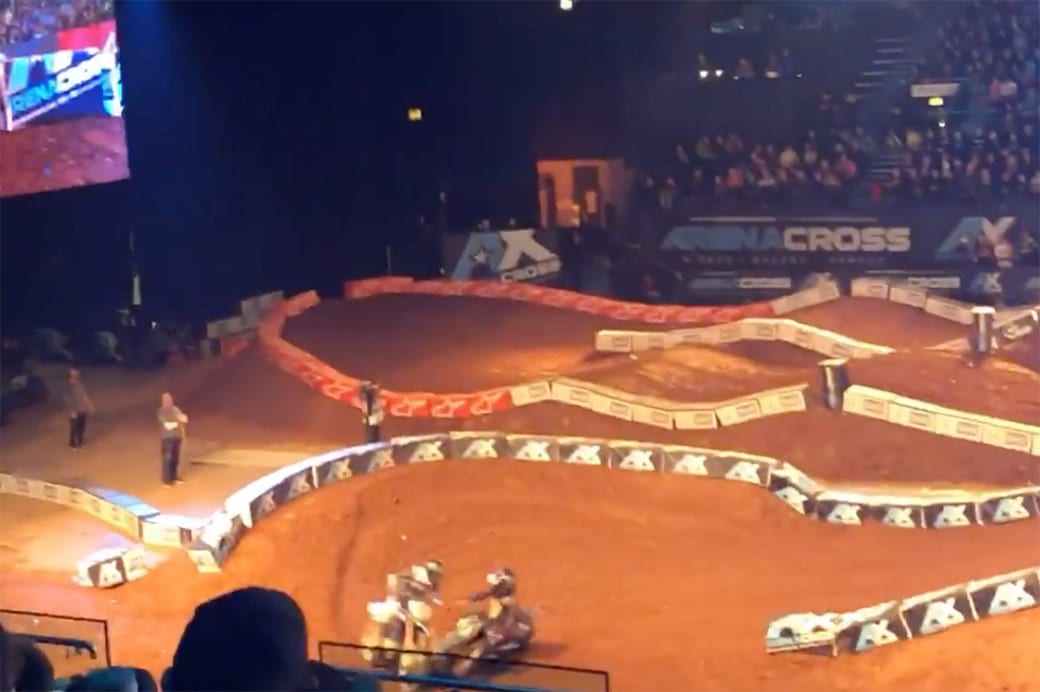