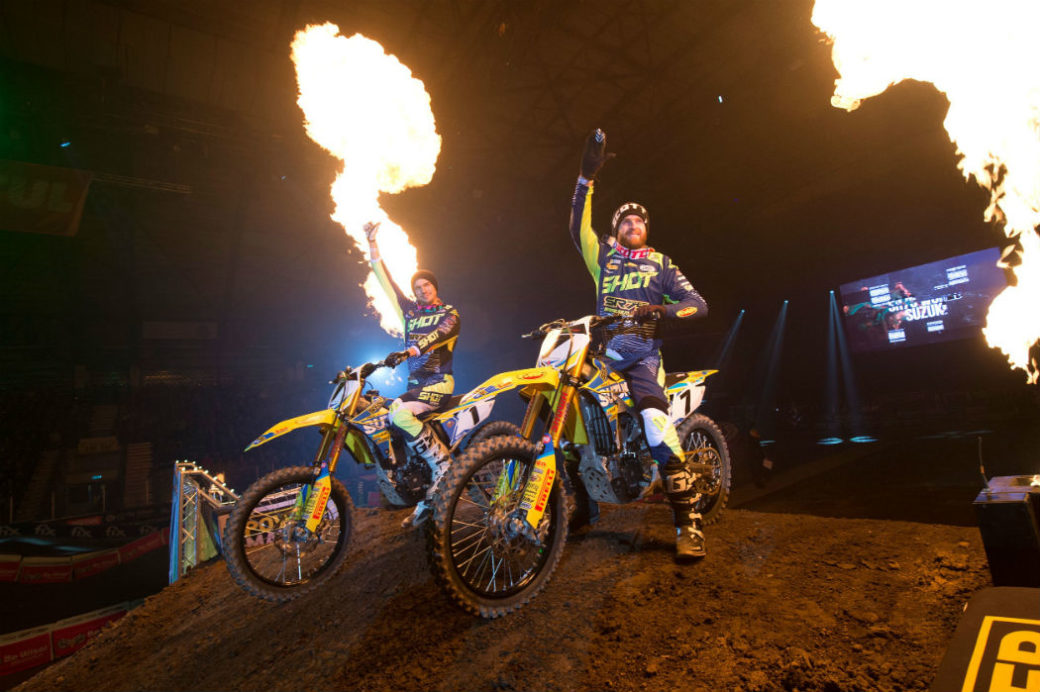 My old mate Geoff Walker, boss of SR75 World Team Suzuki, is gearing up to regain the UK Arenacross Tour title he won for three years in a row.

The Irishman clinched the premier 450 class crown from 2015 to 2017 with Thomas Ramette in the saddle and for 2019 the hat-trick hero Frenchman’s back with his compatriot and new team signing Charles Lefrancois on a 450 and AX legend Cyrille Coulon racing the Pro Lites class.

“I’ve wanted Charles in the team for a long time,” said Geoff.

“He was part of the original plans years ago and I’ve always kept an eye on him because I’ve always felt he could do with a little bit more support.

“Now it’s worked out perfectly because he’s always wanted to ride for the team and, finally, we’ve made it happen.”

Thomas, who missed out on the 2018 title by three points after a photo-finish with Cedric Soubeyras, has been sidelined following an autumn knee operation. He was initially injured at the final round of the Monster Energy AMA SX series in Las Vegas in May and then aggravated it at the third round of the French SX series.

“This year has been tough with Thomas’ injury from the States and he’s not been able to reach where he’s wanted to be ever since which has taken a fair amount of time out of our schedule.”

Cyrille, a veteran team member, has now been dropped down to the 250 class in a tactical move by Geoff.

“You’ve got to make the top six to transition to the new Super-Final so if everyone’s loading up the 450 class – which is fair because they’re looking at the main championship – I wanted to bring Cyrille back and put him in the Lites.

“People love to watch him because he’s pure entertainment. He’s only ridden an RMZ-250 once but you don’t need to write that!

“He will attack it and have a lot of fun in his usual fashion.”