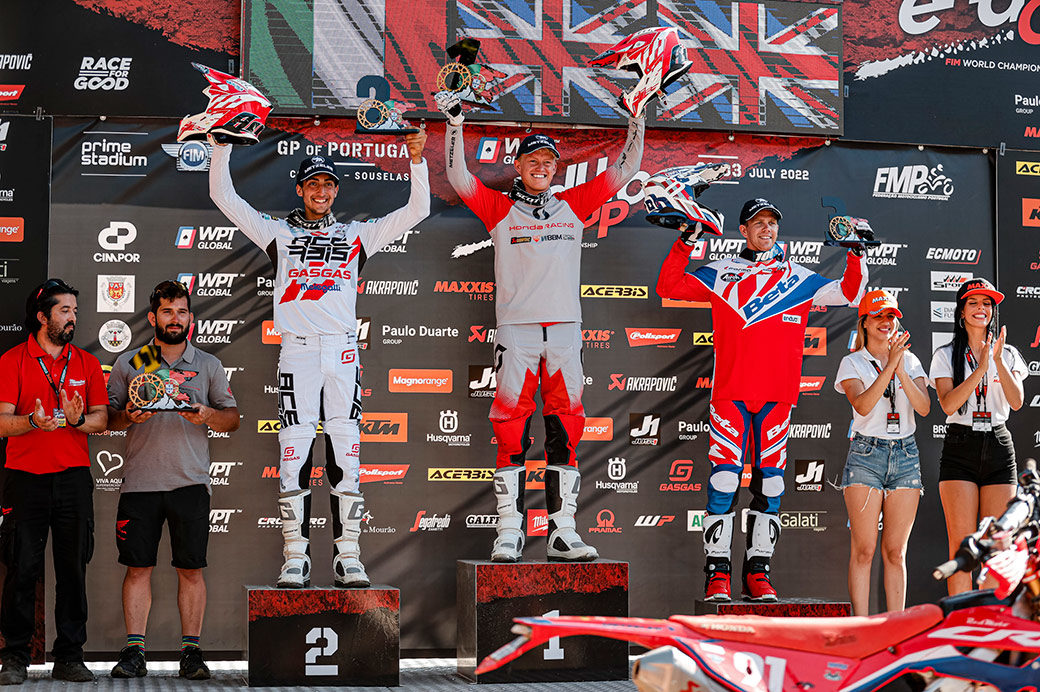 Honda Racing RedMoto World Enduro’s Nathan Watson has raced to his second victory of the weekend, topping the EnduroGP class on day two at round four of the WPTGlobal FIM EnduroGP World Championship in Portugal.

All smiles after his first EnduroGP victory of the season on Saturday, Nathan Watson wasted no time in returning to the top step of the podium by winning again on Sunday. Clearly favouring the hard and dry Portuguese terrain, the Honda rider hit his stride late on lap one by topping the opening ACERBIS Cross Test. Fastest in the following JUST1 Enduro Test, he closed the gap to early leader Steve Holcombe (Beta).

Holcombe, also back to top form, had managed to keep Watson at bay as they exited the second POLISPORT Extreme Test, but Watson again favoured the ACERBIS Cross Test. Clocking in the fastest time he put himself out front by four seconds as they began the final lap of three.

Striking again, he won the JUST1 Enduro Test to build a 12-second cushion over Verona who’d now moved up to second. Keeping the pace high, it proved once again to be Watson’s day and with two more solid tests, the Brit clinched victory to mark a career-first EnduroGP double win.

Behind him, Verona fought hard to keep pace while also facing a rejuvenated Holcombe. Holcombe started out the day strong with two test wins as Verona spent the morning steadily chipping away at his advantage. With a lap to go the Italian was up to second. Holding strong, Verona took his second runner-up result of the weekend to move back into the EnduroGP championship lead.

Enjoying a resurgence of form, Holcombe was happy with his efforts for third overall. Defending EnduroGP champion Brad Freeman (Beta) also enjoyed his best result in recent weeks too. Fourth today, while also taking a POLISPORT Extreme Test win, indicates Freeman is beginning to put his numerous injuries behind him.

Making the Enduro1 class his own in 2022, Andrea Verona marched on to his eighth consecutive victory of the season in Portugal. The battle for the remainder of the podium was tight, with Samuele Bernardini (Honda) taking the runner-up result by less than three seconds over Thomas Oldrati (Honda). Matteo Cavallo (TM Racing) was only a further five seconds behind in fourth.

With his win in EnduroGP, Nathan Watson also made it a double in Enduro2 in Portugal. Holcombe finished as runner-up, while Czech’s Krystof Kouble enjoyed his first visit to the podium with third.

Brad Freeman was back on top of the Enduro3 podium on Sunday. His double win puts him back in the driving seat of the championship. Just three seconds behind Freeman, Sans Soria took second, while Husqvarna Factory Racing’s Mikael Persson completed the top three.

Day two in Portugal finally saw Team Sherco CH Racing’s Zachary Pichon’s unbeaten run of form come to an end. Determined to get the better of the Frenchman, Roni Kytonen (Honda) came out swinging this morning and with a strong showing managed to take the win. With Pichon second, Luc Fargier (Beta) was back on the podium in third.

The WPTGlobal FIM EnduroGP World Championship takes a short break before returning to action with a double header rounds five and six in Slovakia and Hungary, beginning on July 29-31.

Nathan Watson (Honda): “An incredible weekend, I’m speechless! We worked a lot on the bike: the feeling was perfect and I knew I could push. I gave my best without any mistakes.

“It’s been a perfect weekend going 1-1, which I kind of didn’t expect to achieve coming into this weekend. It’s the first time I’ve ever done that, so it feels amazing.

“I want to give a massive thank you to my team for their effort.”

Andrea Verona (GASGAS): “I really liked the tests this weekend and I’m happy with my result to get second overall again today. It’s been a nice weekend in terms of the championship and I’m excited to wear the gold plate in Slovakia once we come back after this short break.”

Steve Holcombe (Beta): “It’s been a positive race and a big improvement over last weekend to get back on the podium with third today. I’m still nursing a shoulder injury, but I’m pleased with my pace, especially this morning. Hopefully my season has turned a corner for the better now!”

Jane Daniels (Fantic): “Really pleased with how the weekend went and how the championship points are looking. A long wait now until Germany in October but I’ll be ready!”