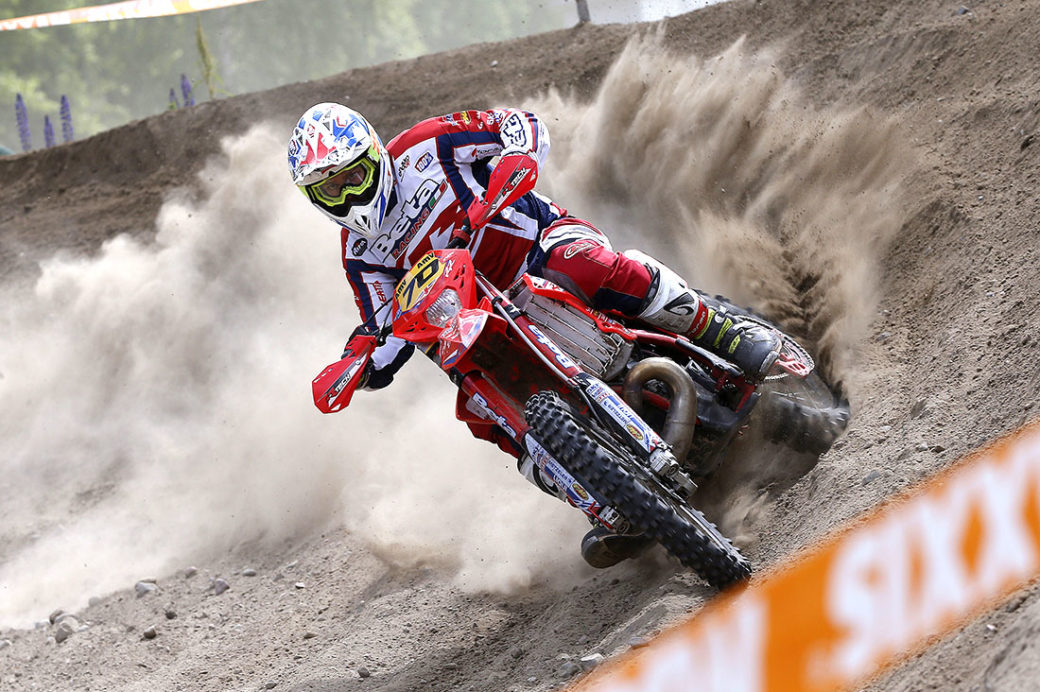 With Round one of the EWC hiting the snow of Finland this weekend, TMX caught up with Britain’s very own World Champion, Steve Holcombe…

TMX: Firstly Steve, how are you feeling ahead of this weekend’s opening Enduro World Championship event in Finland?

Steve Holcombe: I feel pretty good really. The weekend before last I raced the second round of the Italian Enduro Championship, which went pretty well. That was my first outing this year, so it was good to blow away the winter cobwebs. My speed was good – it’s good to know things are where they need to be. I’ve also spent some good time in Finland. I raced the first two rounds of the Finnish championship. My results weren’t great, but I feel well prepared for the season opener.

TMX: You mentioned your results weren’t great, was there any specific reason for that?

SH: “I hit a tree! Obviously, getting used to Finnish winter conditions isn’t an overnight process. As I’ve learned it takes a while to get comfortable riding with spiked tyres on snow and ice. At the first round I was the first rider on the tracks, which isn’t easy. It was never about trying to win the Finnish championship events, it was about experiencing and learning. From that point of view it went very well.”

TMX: Do you have your sights set on any particular result in Finland?

SH: I want to do as well as I can but like all the rider that have been there this winter I know it’s going to be a tough event. It’s a well-used cliche but it’s only the first round, not the full championship. My goal is to fight for the EnduroGP title, so I need to do well, but winning it isn’t an absolute must. The Finnish riders will be fast, that’s for certain, so I’m just focused on getting good points. And trying to not get too cold.

TMX: It’s all about the new EnduroGP and Enduro 2 class structure for 2017. Are you a little sad to see the Enduro 3 class go?

SH:Yeah, in some ways I am. Being the reigning Enduro 3 champion it’s a little strange not having a title to defend. But on the other hand I’m excited to fight for a new title. There’s been a lot said about the new two-class structure that we have now. I’m still on a 300cc two-stroke, so in many ways I still feel like I’m representing the Enduro 3 class.

TMX: We’ve heard some horror stories about how difficult the opening round is going to be. What do you expect in terms of the event at round one?

SH: Like I said it’s definitely going to be tough. I guess just how tough depends on the weather – if it’s really cold, if it snows it’s going to be seriously tough. It’s going to be two long days on conditions that most all of the non-Scandinavians aren’t familiar with. I don’t know the exact ins and outs of the race but there’s some seriously long special tests, so I guess consistency and not making mistakes will be important.

TMX: Let’s jump back to the end of last year when you won the Enduro 3 title, does that seem like a lifetime ago now?

SH: Not a lifetime ago, but it certainly seems like a long time ago now. It’s weird in some ways because you work so hard to try and win a title and then when you are fortunate to achieve your goal you seemingly start focusing on the next goal straight away. I spent a good amount of time at various shows at the end of the year, as well as spending time in New Zealand, so I’ve had plenty of time to enjoy the E3 title. Now it’s time to get back to work.

TMX: Last year was an incredible year for you, maybe one that went better than even you hoped it would. Now that you’re a world champion do things feel different coming into 2017?

SH: Last year was a pretty amazing year. Obviously, winning the E3 title was the highlight, but I feel like I learned a lot. But I know I have a lot more to learn and experience. This is only my second season of senior class competition and my third season in the world championships. I guess I’m one of the favourites for the EnduroGP title, which is cool, but as much as I want to try and do all I can to win this year I also want to continue to improve as a rider. I don’t really feel like I’m under more pressure to win – that’s what I want as much as anyone else.

TMX: One thing that’s not changed is that you’re still with Beta for 2017. Is anything different within the team now that you’re a world champion?

SH: I’m with Beta for at least the next three years, which is something that I’m really pleased about. Nothing’s really changed. We’re all still focused on doing our best at the races. With nine rounds this year, with different styles of events, with no one really knowing what to expect it kind of adds to the excitement. The good thing for me is that while there’s lots of changes for 2017, my team and my bike are the same as last year.

TMX: Is it important for you to know that your short-term future is secure with Beta?

SH: Yes, it’s certainly one less thing for me to have to think about this year. This year’s EnduroGP title is arguably going to be the hardest to win title the world championship has ever had. We’ve already seen a number of great riders fail to pick up any deal for 2017, so it might well be that more riders find things tough at the end of the year. It’s an uncertain time for the series, so to know that my short-term future is secured with Beta is important. There’s a lot more both the team and I want to achieve.

TMX: All the best for this weekend Steve, and for your EnduroGP championship campaign.

SH: Many thanks. It’s going to be an interesting one, fingers crossed all goes well.