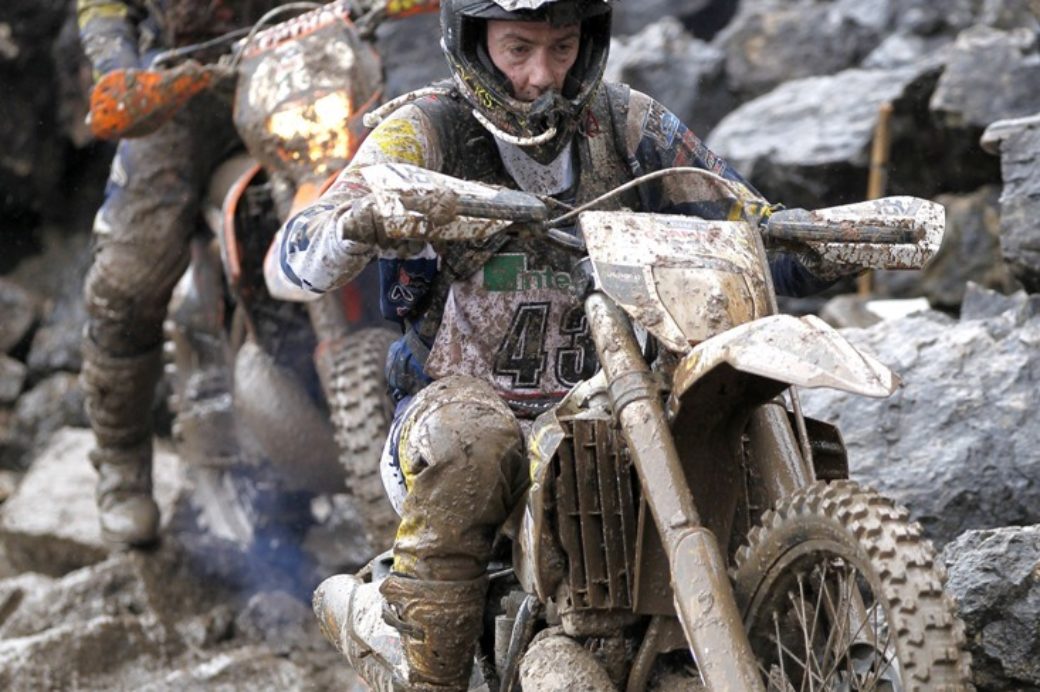 HAS anyone considered the fact that Graham Jarvis might not actually be human? The evidence being he can do unearthly things with a motorcycle at an age when, well, he really ought to know better.

The golden thing about Graham is that he makes us old giffers – the ones of us who have seen far too many riders come right through the schoolboy ranks and then retire at the end of illustrious careers – feel much better about ourselves.
If he can win the UK’s hardest enduro at his age then there’s hope for all us old boys too, right?
Order me up one of those fangled enduro bikes – I’m a going racing…
Obviously it’s not that simple though and the reality of it is that Graham’s a glitch in the Matrix – a complete oddity who can do things on a motorbike that most people only dream about.
More importantly than that, even though he’s the top side of 40 he’s still in great shape – not that I’ve been checking him out or nothing…
Actually, before I wrote this I thought I’d best check up on his age to make sure the old memory banks hadn’t led me astray – which they hadn’t.
I know this thanks to the amazing website www.famousbirthdays.com where I found that Graham was born on April 21, 1975 and is apparently the 22nd most popular Graham on their website. How random is that fact?
In all seriousness though, Graham’s ride to victory in The Tough One was absolutely amazing and he’s fully deserving of taking the £4,000 prize money that was up for grabs in the final running of this iconic event.
Well done that man!
If last weekend’s action was all about hardy race fans braving the elements to watch the world’s hardest hard enduro riders in action then this weekend we’ve got a couple of must-see races for people who prefer sitting down coming right up.
Top priority should be the last round of the Monster Energy Arenacross Tour.
Tighter
Not only is the championship tighter than a gnat’s chuff but series promoters E22 Sports is absolutely guaranteed to pull out all the stops for the grand finale – it’ll basically be so amazing that it’ll be impossible not to enjoy. The action starts at seven inside Wembley’s SSE Arena – a full preview is just to the left. Read it, get tickets, have a grand evening out.
Meanwhile over in Qatar the opening round of the FIM Motocross World Championship gets going in Losail.
Having established itself as the home of the opening round in recent years, the Qatar GP is a bit of an oddity in the sense that it’s held under floodlights which makes it quite the spectacle.
For reasons unknown the schedule has been shifted forward for 2016 which should mean that the first motos are held in daylight with only the closing motos – and podium celebrations – taking place in the darkness.
Motors TV is scheduled to show the whole lot on Saturday afternoon and it’s actually possible to sit down just before noon and see the Argentinian round of the SuperEnduro series followed by coverage of the Hawkstone International, MX2 race one, MX1 race one, take a pit stop between four and five and then enjoy the remainder of the races.
Now the really committed sit-down fans among you will be no doubt already be online searching for a hotel that’s situated within a five-minute
walk of the Wembley Arena that allows noon check-in and has Motors TV in all of
the rooms.
That way you’ll be able to watch the GP and enjoy a top night of arenacross action as well. Hmmm, now there’s an idea…
Graham Jarvis