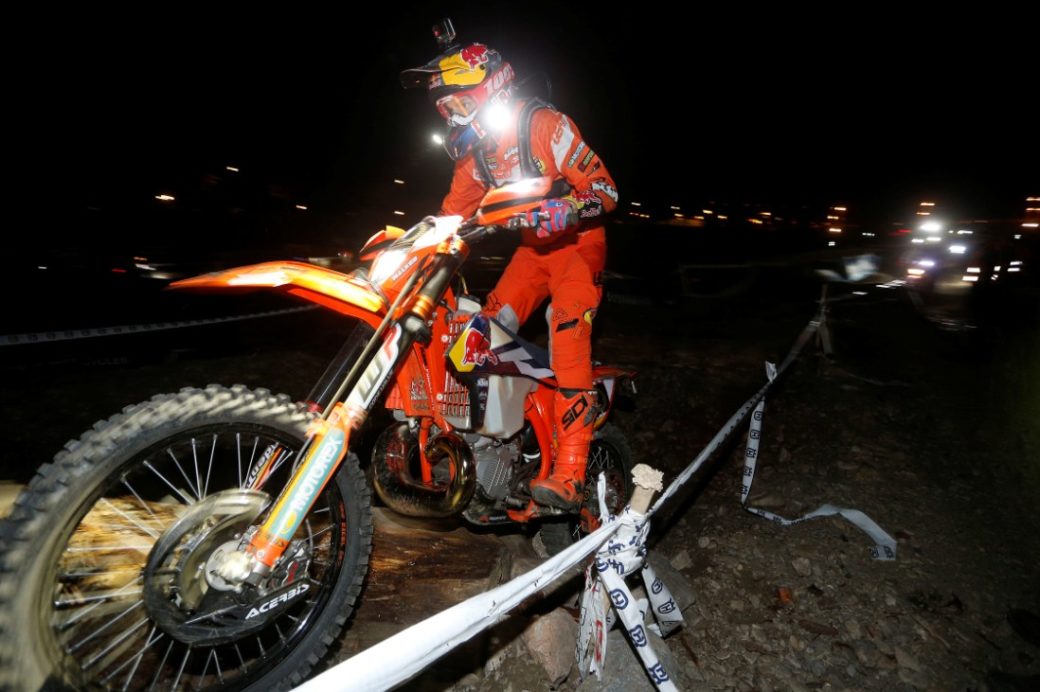 The third running of the Alès Trêm Extreme Enduro in Ales, France ended with both Red Bull KTM riders Jonny Walker and Alfredo Gomez showing impressive speed but both being hit by bad luck.

Winner of the Saturday night Endurocross-style prologue, Gomez was unable to finish the main race after running out of fuel. Challenging for the race win as darkness fell, during the closing stages of the event Walker missed a directional track arrow and eventually finished fourth.
Described by those who finished as one of the hardest days riding they’ve endured for many years Alès Trêm 2017 started in a hugely positive way for the KTM duo with Alfredo Gomez topping the seven-lap Endurocross-style prologue on his KTM 300 EXC ahead of Jonny Walker after both riders won their respective heat races.
Assuming the three-lap main race would be challenging no riders were expecting things to get as difficult, or dark, as they did. “I guess this year’s Alès Trêm was a bit of a wild one,” commented Walker. “The first lap was pretty straightforward – there was a bunch of us all riding together and things weren’t too difficult at all. The second lap was similar. On the third lap it really started to get interesting.” added the Brit.
“I started to push a little harder and Graham and myself opened up a little gap. I felt good but as I passed through a check point I made a very small mistake losing no more than 10 or 15 seconds. As I was pushing to catch back up to Graham I missed a track marker. I accidentally followed the track used during the second lap. At the next check point I was told I was out, so I sat there for a while. Eventually I followed the trail back to where I missed the arrows and got back on track. I was a long way behind the other riders but at least I managed to finish. It’s great to be back competing in an Extreme Enduro but a little frustrating that I wasn’t able to challenge for the win.”
Like Walker, Gomez also endured bad luck during the main race. Well placed at the front of the pack and with most of the second lap completed the Spaniard’s race ended when he ran out of fuel. “45 kilometres into the second lap I was together with Jarvis and pushing hard when I ran out of fuel,” explained the Spainard. “It’s disappointing because I was feeling really good and competing at the front of the race but it can happen. I wasn’t the only one to run out of fuel.”
“I guess it just wasn’t my day even though I felt good. I was waiting for the last lap before really pushing hard, but already we’d opened up a small gap over the others. After winning the prologues on Saturday night it would have been great to try to fight for the win in the main race.”
Results Alès Trêm 2017
1. Graham Jarvis (GBR), Husqvarna, 6:51:36 h
2. Mario Roman (ESP), Sherco, +55 sec
3. Wade Young (RSA), Sherco, +12:53 min
4. Jonny Walker (GBR), KTM, +29:01
5. Billy Bolt (GBR), Husqvarna, +30:54
Alfredo Gomez Jonny Walker