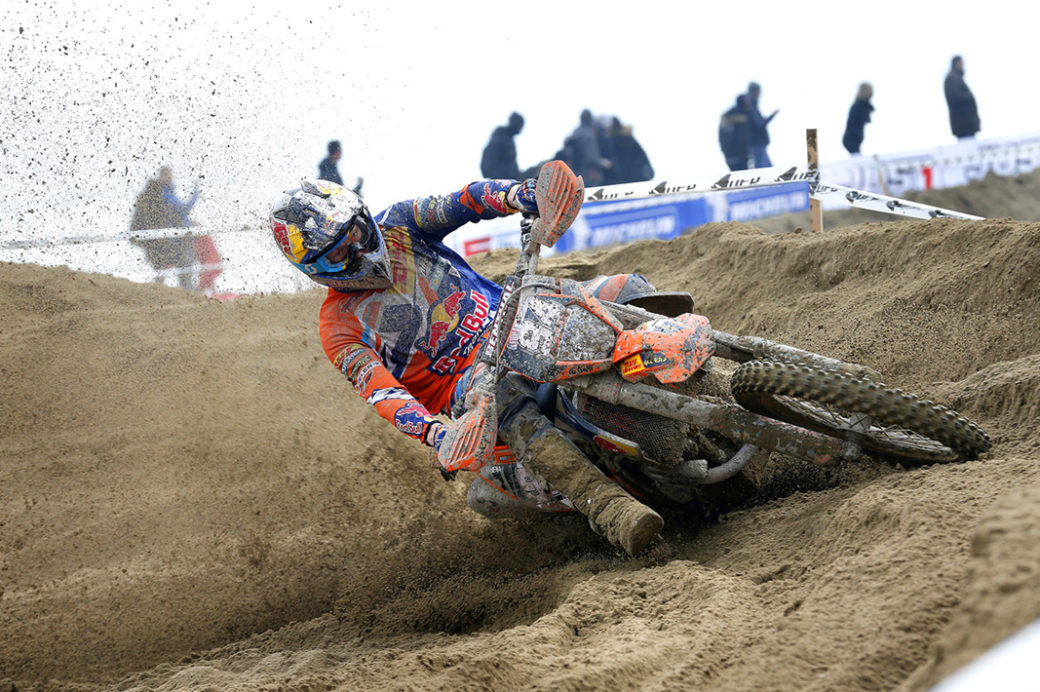 Regular TMX readers may have been keeping an eye on young star Nathan Watson for quite some time now.

But this year you can expect to see him in the headlines, not for his successes in motocross or international sand races but in the world of enduro.

I’m somewhat embarrassed by the fact that, despite his vast success across several disciplines, I had yet to meet Nathan until the middle of February.

I was lucky enough to catch up with him then and chat about his career and his hopes for the year ahead.

I first saw him tearing round the training area on the sands of Lignano Sabbiadoro beach in Italy, where the opening round of the Assoluti d’Italia (Italian Enduro Championship) was taking place.

A tall lad with confident style, in a Red Bull helmet, and riding a brand new EXC KTM.

Several onlookers asked me: “Is this Watson? The new English rider? He looks very fast!”

Friendly, open, witty and eloquent, his mature attitude and dedication to racing belie his youth.

But the 21-year-old has had plenty of time to get used to the ‘moto life’, starting, like many others, at a very early age with the path set for Nathan and his younger brother Ben:

“Dad says he put me on a bike as soon as it was possible – so that was probably before I could even walk, knowing him,” said Nathan.

From that moment bikes became an addiction.

Nathan tried his hand at a bit of everything – trials, supercross, sand races – before finally settling on motocross.

Last year saw him in Kimi Raikkonen’s Ice One Racing Husky team, after he impressed during stand-in rides for Husqvarna the previous year.

The squad also featured Max Nagl and Todd Waters and Nathan was happy to be running in MXGP after a couple of very strong seasons in British MX, where he bagged top-tens in the standings.

“Getting the Factory ride with Husqvarna for MXGP was a big deal for me,” said Nathan.

“I’d say it was the highlight of my career so far as I’d always dreamed of being in MXGP.

Results-wise highlights were tenth at Loket GP in 2015 and timed qualifying at Mantova where I ran second fastest in MXGP – that was pretty cool!”

Nathan also took top honours at Weston Beach Race last year, something he’d come close to many times before and he was delighted to continue the family tradition – his dad Rob Meek won the event several times.

Nathan then proved his prowess in sand once again at the Red Bull Knockout – a spectacular beach race in Holland – where he claimed the second step on the podium, sandwiched between Axel Van de Sande and Camille Chapeliere.

Watson’s growing reputation as a sand specialist was enhanced again at round one of the Italian Enduro Championship, where two out of the three special tests were based on the beach.

Nathan wasn’t phased by the challenging and lengthy nature of the tests, either on the dry day one or in the sodden Weston-like conditions of day two.

“I love the sand and especially the beach, so I was very excited when I walked the beach test in Lignano,” said Nathan.

This excitement showed on his face all weekend, and his infectious smile had everyone up for the action.

The other test on the lap could have been mistaken for a British Championship race, with the muddy Extreme-style cross test proving as slippery as an eel in the torrential rain.

The conditions were seemingly perfect for Watson, although he claimed: “Muddy conditions have never been my strongest but I do actually enjoy riding in them.

“I had a lot of fun that weekend and it showed in my riding.”

And how! The youngster surprised everyone by smashing the results, winning overall and beating the likes of Aubert, Salvini, Phillips and Remes, to name but a few.

While team manager Farioli looked on with a knowing smile, Nathan himself seemed slightly shocked by his pace – which was quite endearing given the way everybody around him was so sure of his achievement.

But he is 100 per cent  sure of what he needs to do this year and exactly where he wants to be: “Without doubt, I want to go straight in and fight for the world title in Enduro this year, I have a lot to learn and it will not be easy but that’s my goal.”

After his display in Lignano, it’s certain he will surprise a good few members of the EnduroGP paddock this year. And his eagerness to succeed and quick-to-adapt style will stand him in good stead. This year the World Enduro season spans various climes, from the sands of Morocco to the forests of Finland and almost everything in between.

And Nathan is typically upbeat about the task ahead and what’s in store.

“I like riding all conditions and I’m excited to get stuck into some difficult terrains. I’ve just got to try and learn fast and hopefully I can get some decent results.”

Last year he spent a lot of time in Belgium with Ice One Racing, but this season he can be based at home in Nottingham.

And, despite admitting he prefers the sunshine of Southern Europe, it’s a pleasing outcome for the 21-year-old.

He is happy to travel back and forth to races in the Italian Championship and the World Enduro Championship (EnduroGP) and when he’s at home he can always find some mates to ride with, including close friend and 2015 Junior Enduro champion, Jamie McCanney.

He concedes also that, unlike many of his peers, his training regime isn’t particularly punishing, preferring to put the emphasis on fun. He would rather hop on his MX bike than spend hours in the gym: “I don’t have a physical trainer or a programme, I just do what I believe I need to do,” he admitted.

“I enjoy training so I get plenty done and I will carry on doing my motos on the MX track as I think that’s the best way to get fit.”

After the “golden years” of Paul Edmondson and David Knight we have had to wait quite a while to rekindle the link between the UK and Enduro.

But thankfully, in the last couple of years we’ve seen a serious resurgence.

The McCanney brothers, Steve Holcombe and Jack Edmondson have all proved to be brilliant additions to the series – and Nathan looks set to top up the talent pool.

But just how did this signing with KTM come about?

Even the most promising of youngsters tend to have to work their way up to the factory squads.

But after sharing a few conversations with the team boss, and a very high-pace training session with Antoine Meo, the deal was sealed.

Nathan said: “I didn’t have any offers that really excited me in MX but I had the opportunity to ride for Factory KTM in Enduro and  I knew I couldn’t pass that up, so I went for it.”

He has no regrets about leaving MX, despite the fact that he was looking stronger with every drop of the gate.

“I fancied giving enduro a shot. A lot of my friends ride it and I enjoy competing, no matter where it is or on which bike, so for me it feels like nothing has changed.

“And to be honest I think enduro suits me better.”

After his superb riding in Italy he certainly seems well suited and settled in.

And despite his prowess in lengthy sand races, he’s not particularly keen to become one of the new crop of young Dakar riders any time soon – meaning we are likely to keep him in enduro for a little while yet.

“Although I’m keen on loads of different bike sports, I’ve never been interested in Dakar to be honest,” he admitted.

“Maybe that will change in the future but for now I’m focused on enduro.”

Nathan will be sharing the pit with the likes of legendary multi-champions Cervantes, Nambotin and Sanz, as well as American EnduroGP newcomer and Super Enduro star Taylor Robert.

But being surrounded by such decorated riders isn’t something that worries him, using it perhaps as further motivation to succeed under the KTM banner.

Nathan said: “I don’t really have an idol in Enduro. If I had to say somebody I looked up to it would be Herlings, he amazed me when I watched him at MXGP. He is special on a bike.”

E1 – the class where Nathan will ride with his 250 EXC-F is not without some seriously strong riders.

Last year’s TM champion, Finland’s Eero Remes will stay in the class, aiming to retain his crown, while his KTM team-mate Ivan Cervantes will one of the favourites for the title after an injury-blighted 2015.

Factory Yamaha will also be strong with a line-up of Mikael Persson and Nathan’s buddy Jamie McCanney.

Sherco’s Lorenzo Santolino and Anthony Boissiere are also more than capable of taking top honours but Nathan has already proved to be quicker than four of his E1 class rivals when tested on Italian soil – beating Remes, Persson, Honda’s Alessandro Battig and Austrian Pascal Rauchenecker.

Watson very much gives the impression of being a down-to-earth, chilled-out guy who is coming to give enduro his best shot – just happy to be riding his bike and doing it extremely well.

If the first race in Italy was just a warm-up and somewhere for him to learn the tricks of the trade and iron out any creases before the first EnduroGP race in April, then he didn’t falter the entire weekend.

In Enduro, riders are required to carry out some work on their bikes and having some mechanical skills can be useful if you’re ever stuck out ‘on the lap’ and far from the paddock.

Nathan has this sussed too: “In motocross, except for last year with Ice One Racing, I always had to prepare my training bikes, so I’ve done a fair bit of spannering. I don’t think working on my bike will be a big problem.”

As the 2016 season draws nearer, I for one will be eagerly anticipating Nathan’s arrival on the EnduroGP scene.

Tthe fact that so much new and exciting talent is keen to join the ranks is proof that this fantastic sport is healthy and growing.

Nathan could be the perfect addition to shake up the standings and keep everyone on their toes.

His goal of the E1 title – while a big ask for a rookie – seems more than achievable.

And he clearly has the dedication, skills, and winning personality to become an EnduroGP favourite.