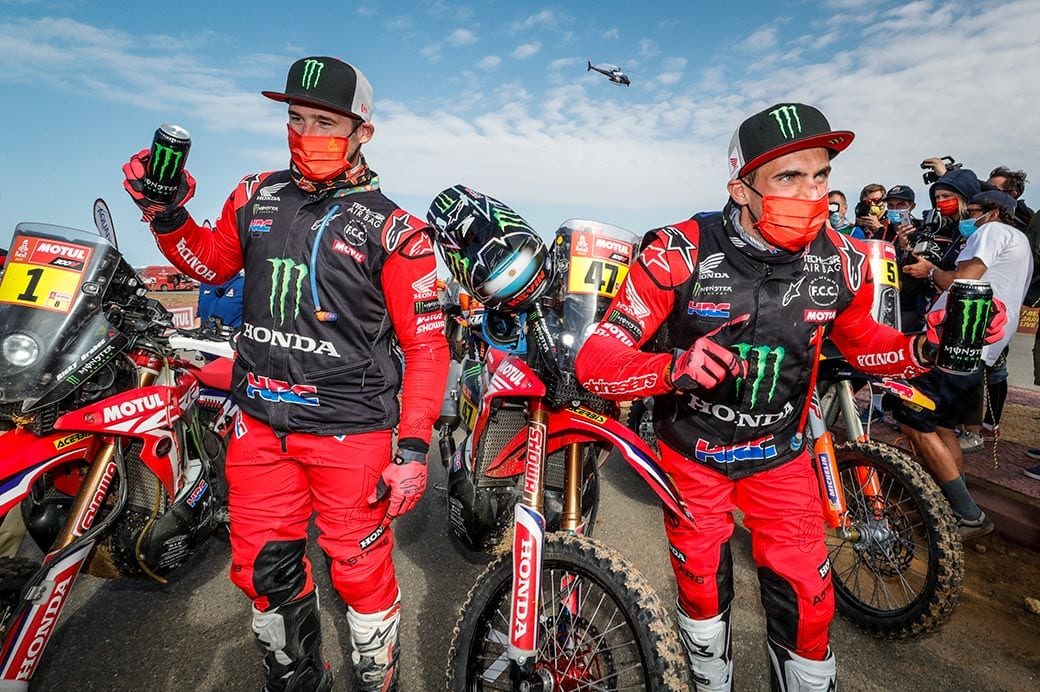 Monster Energy Honda Team has done it again at the 2021 Dakar Rally, snatching the overall win with a one-two finish for the team who dominated throughout.

Thirteen gruelling days came to a close today in Jeddah on the shores of the Red Sea, with Kevin Benavides emerging the winner of the 2021 Dakar Rally and team-mate Ricky Brabec taking second place overall. The American Monster Energy Honda Team rider won the final special of the rally in an intense 202-kilometre thriller.

Monster Energy Honda Team ruled the roost throughout the world’s toughest race for a second consecutive year, as the squad proved to have greater riders and superior mechanical firepower, winning 10 stages and leading nine of the thirteen days of racing. Kevin Benavides made history to become the first South American rider ever to hold aloft the winner’s heavy bronze Touareg. The Argentinean, whose consistency turned out to be the decisive factor, claimed two stage wins in the rally. Honda’s success was rounded out with runner-up spot going to American Ricky Brabec. The winner of last year’s edition finished with a final tally of four stage wins.

The last time Honda managed a one-two in the Dakar Rally was back in 1987 at the hands of Cyril Neveu and Edi Orioli.

Kevin Benavides: “The final stage of this Dakar 2021 was very difficult: I started third so I thought that it would be easier, but it was not like that. At kilometre 50 all the riders in front got lost, so I began to open the track. The stage has been very difficult to navigate so I stayed very focused on doing things well.

“I gave everything to achieve this win which is a dream come true for me. I am very happy and thrilled about it. I crossed the finish line thinking about many things, with great emotions… Paulo Gonçalves also crossed with me… It was a great moment.

“I am really pleased and I’m living this moment. I want to thank the whole team, starting with my mechanics, for the great job they have all done this difficult year. Thanks also to Honda for giving us such a great bike which made it possible to achieve the dream.”

Ricky Brabec: “We are back in Jeddah. Kevin and I did a great job. The whole team did a great job. It was unfortunate for Joan and Nacho. I tried to make a push to try and get Kevin seven minutes ahead, but unfortunately I failed that. I had to settle for the number two spot. All in all it was a great rally. My mentor and my assistant Kendall, my mechanic Eric did a great job and kept Nacho and I focused and in one piece. Thank you guys once again, and hopefully next year we’ll be able to take the number one back on this bike.”

General Manager, Ruben Faria: “This Dakar has been very intense and hard-fought. We overcame the Covid restrictions and the entire team was able to participate in the race. During the entire Dakar, Monster Energy Honda Team has been really strong. We got off to a good start in the prologue, while the first two stages, with all the navigation and starting out from the front, was a bit more difficult. By the fourth stage we had begun to dominate the race and as we have seen, it was a clean race and very professional job from everyone involved. Kevin was really strong and Nacho was perhaps the strongest on the track, although he fell three days from the end. Ricky and Joan have won several stages, showing their potential, although Joan had to withdraw on the penultimate day of the race. The Dakar is like that, it is the toughest of races. We managed to finish first and second thanks to Kevin Benavides and Ricky Brabec. The team has done an excellent job and everybody should be congratulated and proud of themselves. Japan has made a great bike – really good – which has not caused any problems whatsoever. We will continue working like this to win again in 2022.”