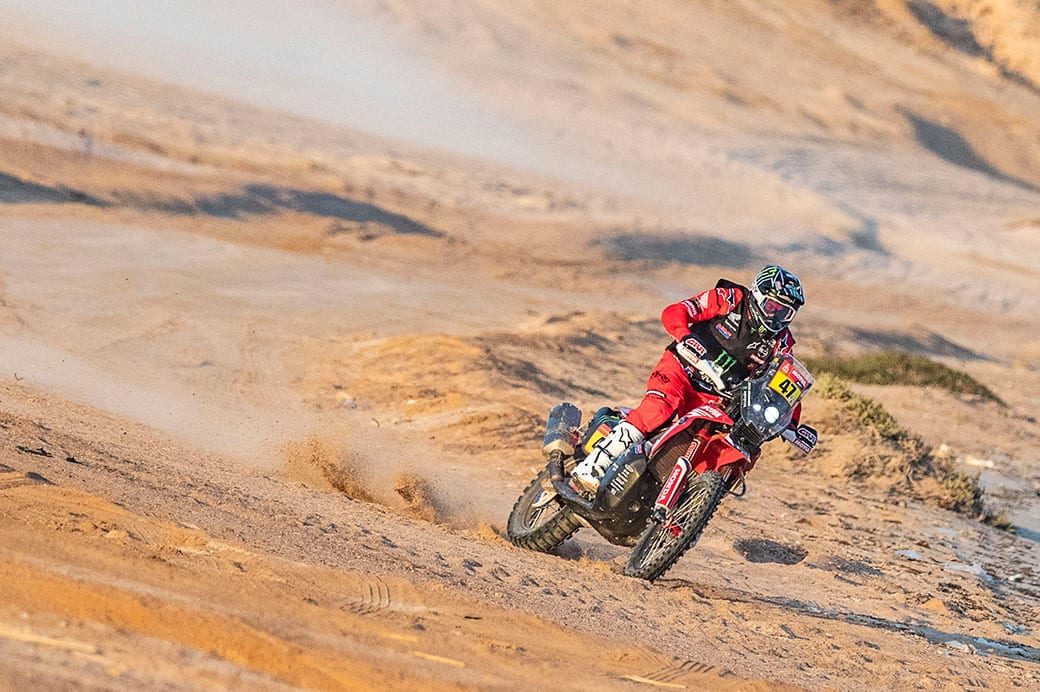 The ninth stage of the Dakar turned out to be an extremely tough one. All the riders arrived at Neom exhausted after the 465-kilometre looping special stage on the shores of the Red Sea, which proved highly-demanding in terms of both riding and navigation.

It was a 1-2-3 for the Monster Energy Honda Team: the victory on the day went to Benavides, second place for Brabec while Cornejo, third, did a splendid job defending the overall lead.

The Neom loop rewarded the Monster Energy Honda Team with some excellent results. The 465-kilometre special was both physically and mentally demanding, with competitors battling over hard track, with plenty of rocky areas and even some sand, on a day in which sweltering temperatures – in excess of 30°c – tested riders to their absolute limits.

The battle for the final overall victory in this Dakar Rally looks set to be a long and arduous one. However, José Ignacio Cornejo took advantage today to consolidate his leadership in the overall rankings with a noteworthy result at the finish-line situated six kilometres from the Neom bivouac. The Monster Energy Honda Team rider kept a cool head and showed some deft navigational skills, opening the track throughout the day to reach the Neom finish-line among the front-runners. The Chilean now holds an 11’24” gap over his team-mate Benavides.

“Today was a really tough stage, with many rocks and it was very long,” said the Dakar leader, Cornejoc. “I started first and the idea was to open as fast as possible so that the riders wouldn’t be able to cut down the time. Toby Price who came out behind me and was battling with me in the general standings, unfortunately fell. This is news that we never want to hear, that one of the guys has been injured – hopefully it is nothing serious. 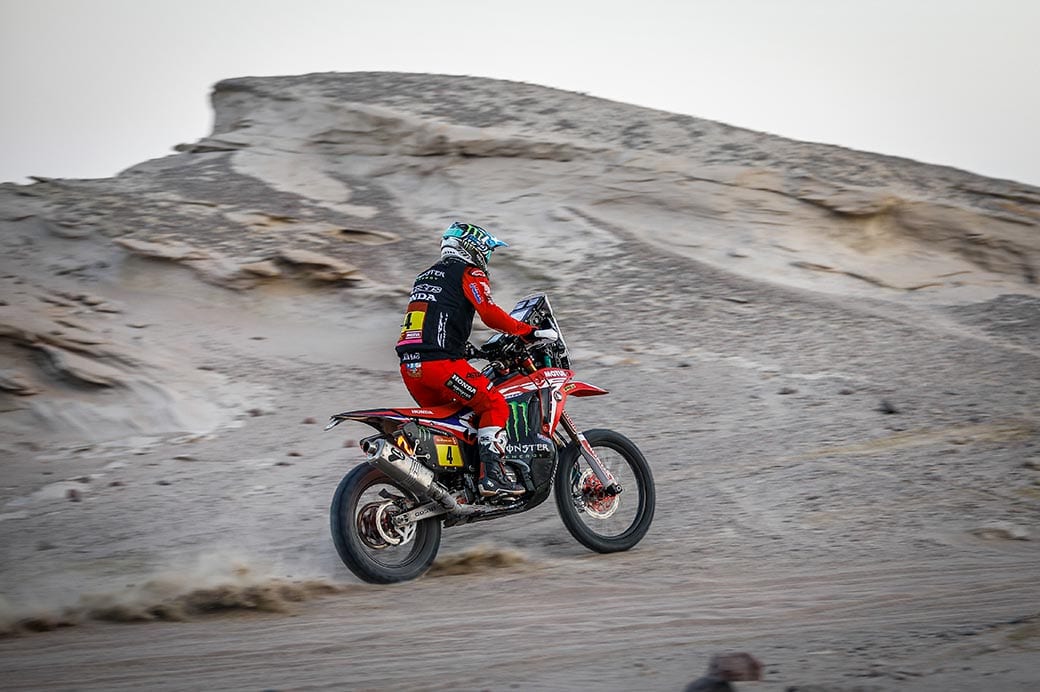 “As far as the stage went, I opened throughout the entire special, which was very long and mentally tough. I didn’t drip a lot of time so I’m very happy with today’s job. There is less and less distance until the end. Now it’s time to rest and focus on tomorrow’s stage.”

All Monster Energy Honda Team riders now occupy the top five positions in the 2021 Dakar with Kevin Benavides alongside team-mate Cornejo. The Argentine, second in the general standings, claimed the top honours on the special stage. Kevin dedicated the win to the memory of his former team-mate Paulo Gonçalves who was killed in the Saudi desert a year ago.

“We can say that today was a really hard special stage,” said Benavides. “Today, it is a year ago since the death of my friend Paulo Gonçalves. I aimed to do the best possible stage and this victory is dedicated to him. I’m happy with the job done, but I also have mixed emotions as at the end of the stage I found out that my brother had fallen and got injured. I found out that he’s fine, so that has calmed me down, but it’s been a strange day nevertheless. There are three more days left and everything could change, so you have to be focused and give your all on a day-to-day basis.”

Meanwhile, Ricky Brabec, who showed good pace throughout the morning, stopped to help out Toby Price who had fallen on the track. Brabec got back into the special once the medical helicopter service reached the spot of the accident. At the end of the day, Brabec had the lost time deducted and was second of this stage. 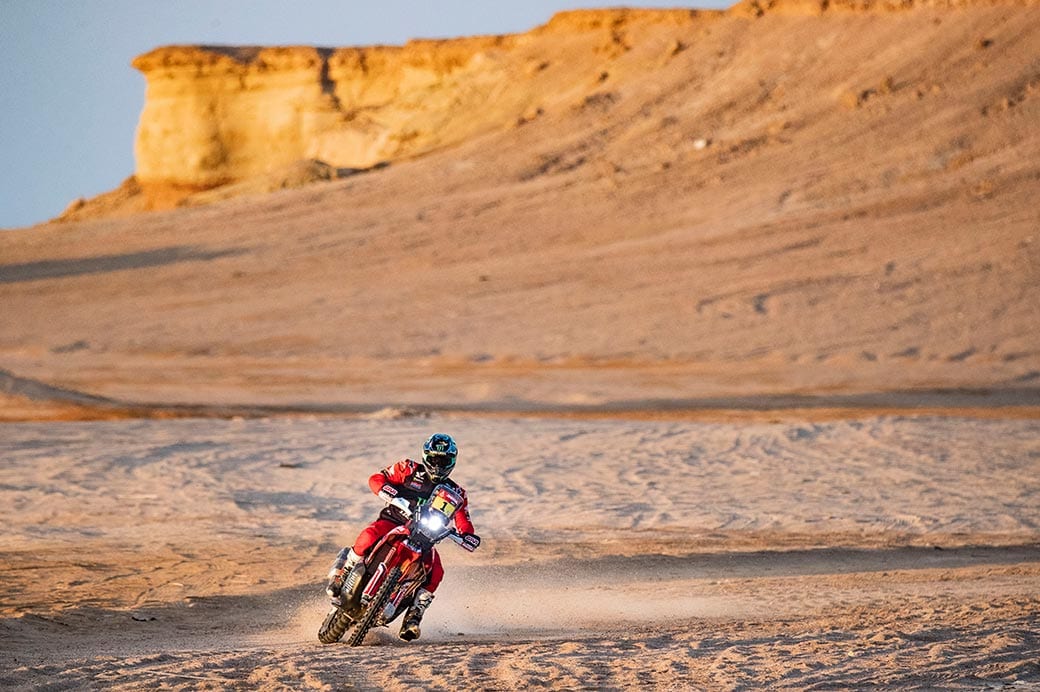 Today was definitely tough,” said Brabec. “We started third. We all had a long day today – there were 465 kilometres – that’s a long day for the navigation and it’s a long day in the desert.

“Unfortunately, Toby had gone down and I stopped for him for about 20 minutes. I was just waiting for the helicopter to get there. It’s a shame. He was definitely up there, fighting for the win. It happens. Every morning when we put our gear on, things like this can happen and we know it. It’s just the risk that we are willing to take.

“Unfortunately, the second week is going to be brutal. Last year we came here first, then we ended in the sand dunes. It was smooth. But this year we are starting in the dunes and finishing in the rocks and the rough, bumpy traces and river-beds.

“This week you don’t want to sleep too much. You want to stay focused. There’s three days left, but look what happened today with a few riders. Three days left and a lot can happen still. We are just going to try and stay focused and make it to the finish-line.” 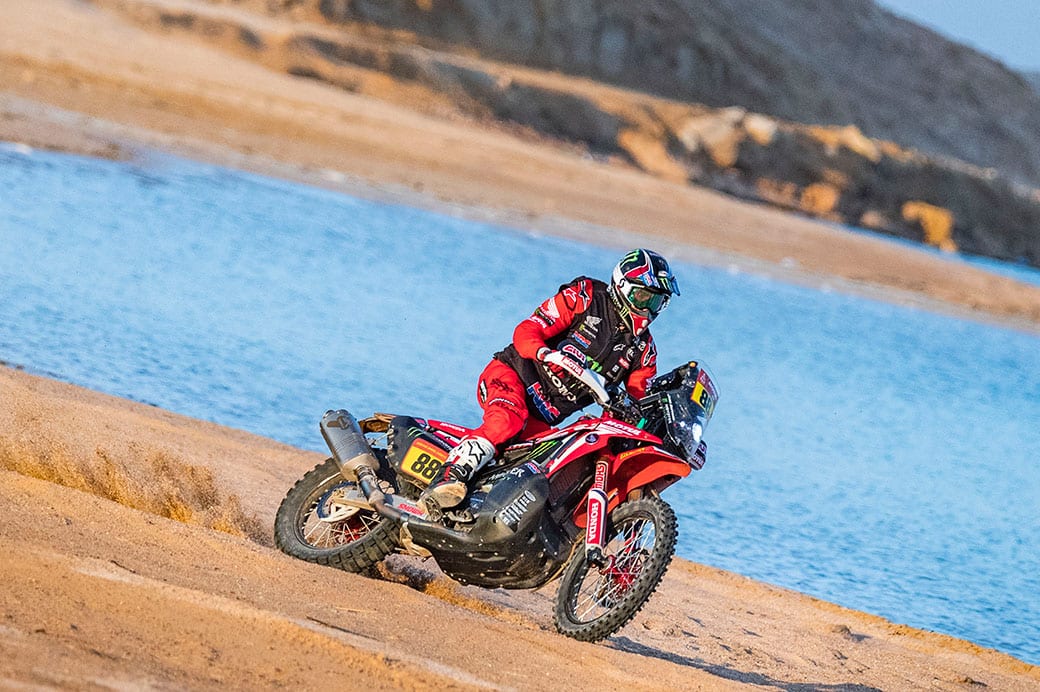 Joan Barreda, likewise, arrived back at the Monster Energy Honda Team bivouac completely exhausted. A crash earlier in the race had hampered the Spaniard’s progress, however, Barreda was able to make it to the end of the stage and back to the camp, where he can now recuperate before starting out tomorrow morning from an advantageous position from further back.

“Today was a very tough day and a very difficult, dangerous stage,” Barreda said in agreement with his Honda team-mates. “I think I was doing quite well at the beginning but I fell in a hazardous area and took a blow to the leg. It is a strong hit, but I able or reach the end of the stage, which was important. Let’s see how the day goes tomorrow, as the Dakar is far from over: there are still three days left.”

The rally will now head south towards Jeddah, but will feature a couple of major stops on the way. The first of these will be at Al Ula. The 583-kilometre total stage will include 342 kilometres against the clock raced across sandy areas.