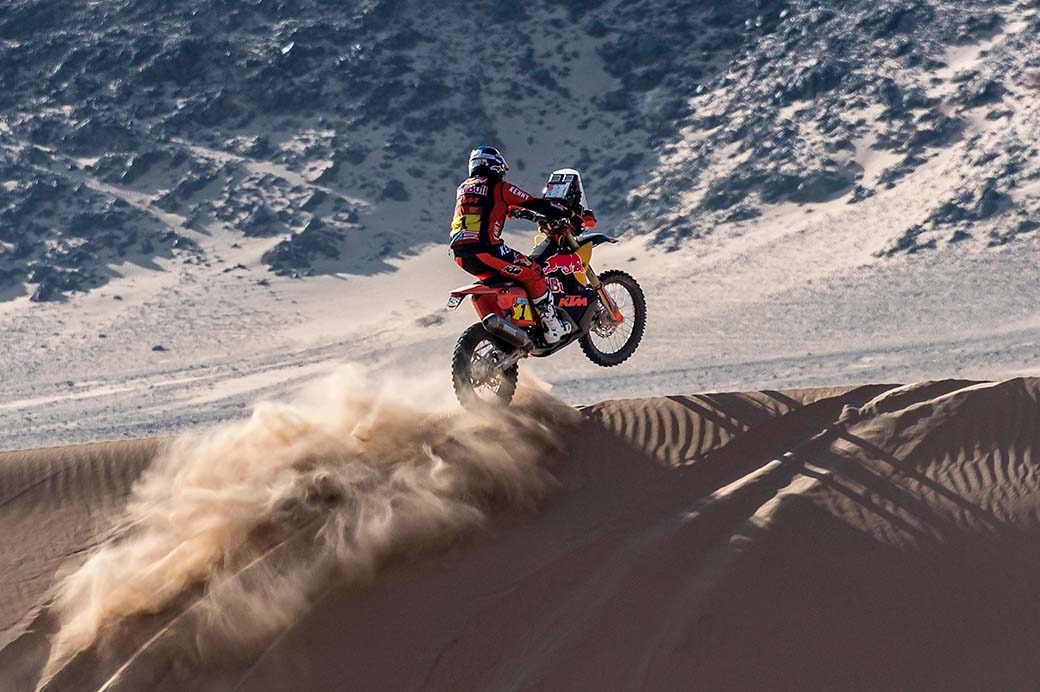 Red Bull KTM Factory Racing’s Kevin Benavides has bounced back from a tough day 10 to win stage 11, the penultimate day of the 2022 Dakar Rally.

On one of the toughest specials of the event, Matthias Walkner brought his KTM 450 RALLY home in an excellent fourth place, and now lies third in the provisional event standings with one day left to race. Opening today’s stage, Toby Price placed 28th, while Danilo Petrucci completed the 346-kilometre special in 17th.

The event organizers ensured there was a sting in the tail to this year’s Dakar Rally by delivering one the most challenging stages of the race on the penultimate day. Technically demanding navigation combined with extremely soft sand and dunes tested the riders and their machines to the limit.

After a disappointing stage 10 yesterday in which his 2022 Dakar hopes came to an end, Kevin Benavides bounced back in style, showing impressive speed to top today’s results. Putting in an incredible performance, the number one plate holder fought his way from a late, 33rd place start to ultimately win the stage by a narrow four seconds. Benavides will now lead out the event’s short, final 164-kilometre timed special on Friday’s stage 12.

Kevin Benavides: “It was a really demanding day today. It’s great to get the win but I’m full of emotion because of the issue I had yesterday. Up to that point I was fighting for the overall, and now, after going fastest today I know I would have been in with a chance to win the rally. I gave it my all today, mostly to prove to myself that I could do it. I think it’s important to be able to come back from disappointment and immediately fight for a stage win. I have to thank the whole team, but especially my mechanic who worked so hard last night to give me an amazing bike for today – it felt perfect on the stage. I will now have the pleasure of opening the last stage of the race with no pressure, so I’m really looking forward to it and reaching the finish.”

Well in the fight for the overall rally honours, Matthias Walkner had to ensure he delivered a strong stage result today with the minimum of mistakes to stay in contention for the 2022 title. Fastest to the first checkpoint, Walkner navigated superbly through the remainder of the special to complete the stage in fourth place, just under five minutes down on teammate Benavides. Moving up to third overall in the event standings, Matthias will be aiming to reduce the gap to the current leader during tomorrow’s stage and secure a podium position while also fighting for the rally win. 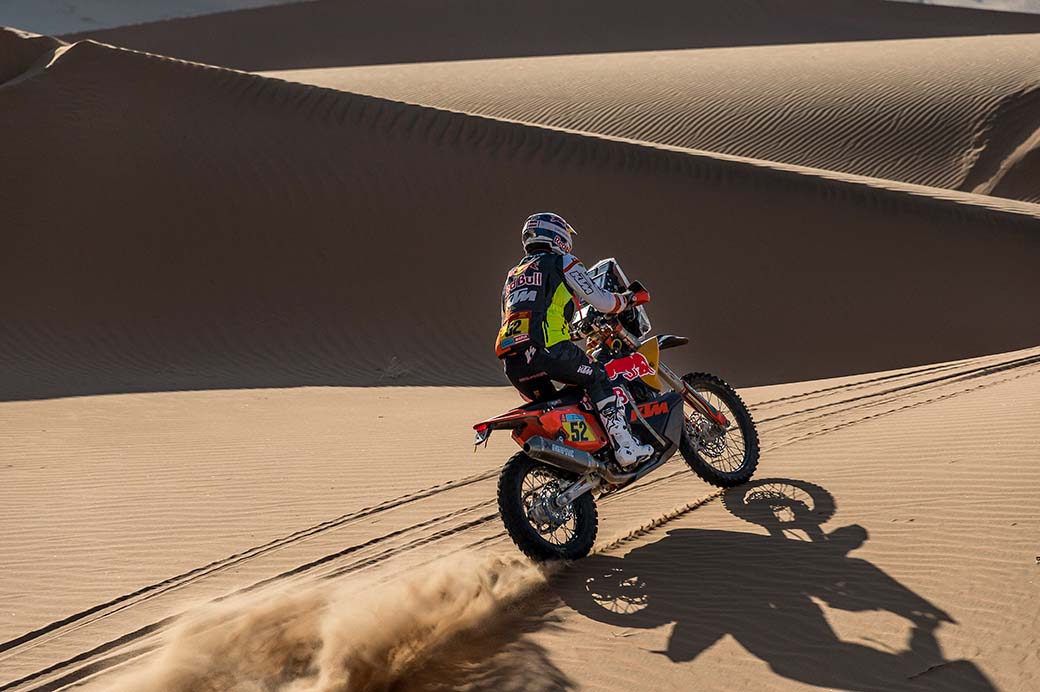 Matthias Walkner: “It was a really long and really fast stage today. It was very dusty this morning too, which made the navigation even more difficult. I made a few small mistakes, but I really did try my best all day pushing as hard as I could. Finally I was able to make the finish with a good time and it puts me in a good position for tomorrow, so we’ll see what happens.”

After his win on day 10, Toby Price had the unenviable task of opening today’s ultra-tough stage 11. An issue early on where a waypoint didn’t validate correctly for the Australian put him on the back foot for the rest of the special. However, using his skill and speed, the twice Dakar Champion was able to regroup and keep pushing through the arduous terrain. Ultimately completing the stage in 28th, Toby now lies 10th in the overall standings with one day left to race. 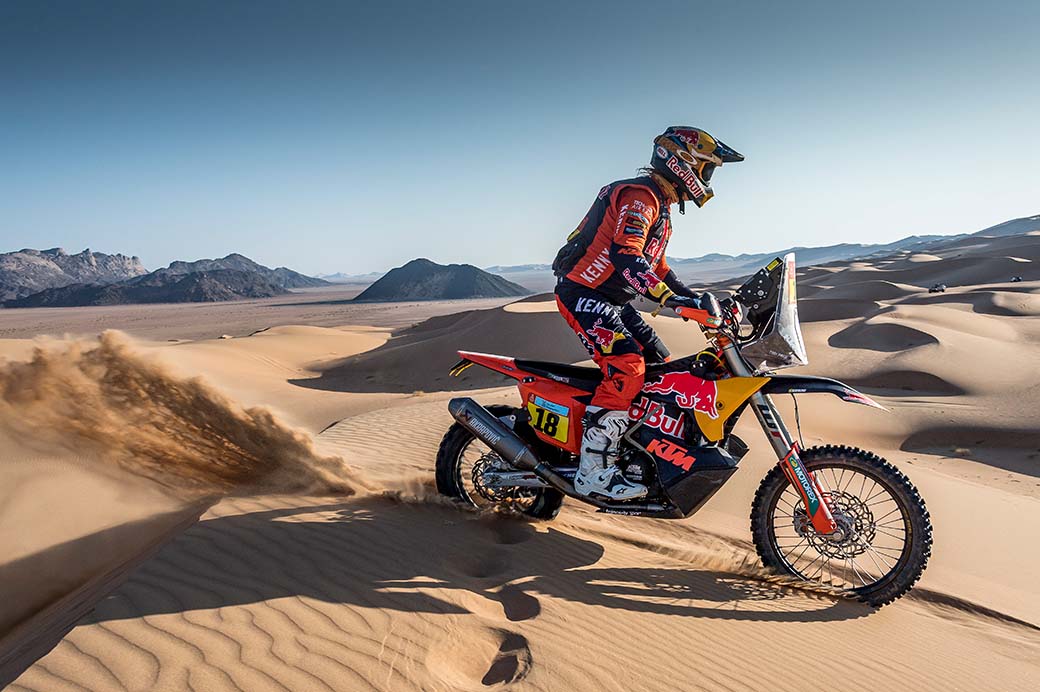 Toby Price: “It was super dusty today and navigation was tough, but I had a frustrating problem early on at kilometre four where one waypoint didn’t validate, even though I’m pretty sure I was in the right place. I had to zig-zag back and forward and thankfully in the end, even though I was on the same track, it activated. Hopefully, we can have that checked, but other than that the day went okay, I felt good on the bike and arrived safely at the finish line. One more day to go tomorrow, and that will be the 2022 Dakar complete.”

Continuing to impress, and despite the severity of today’s stage, Danilo Petrucci brought his Tech3 KTM 450 RALLY home in a commendable 17th place, just over 23 minutes down on the eventual stage winner. With one more day remaining, the former MotoGP racer is now just 680 kilometres away from completing his first Dakar Rally.

Danilo Petrucci: “It was one of the toughest days of my life today. I got a little lost early on with some other riders and then after that there were some really soft dunes. I have never seen anything like that before, it was really tiring to ride through. Then we raced through a huge sandstorm where it was really difficult to find your way and stay focused on your navigation. Luckily, after the refuelling it was okay – the sand was still really soft, but it wasn’t so tricky. Unfortunately, at one point I hit a piece of wood that was hidden underneath the sand and I had a big crash and hurt my shoulder. I was able to make it to the finish, but it did give me a lot of pain. We have one more day to go, so I’m looking forward to reaching the finish.”