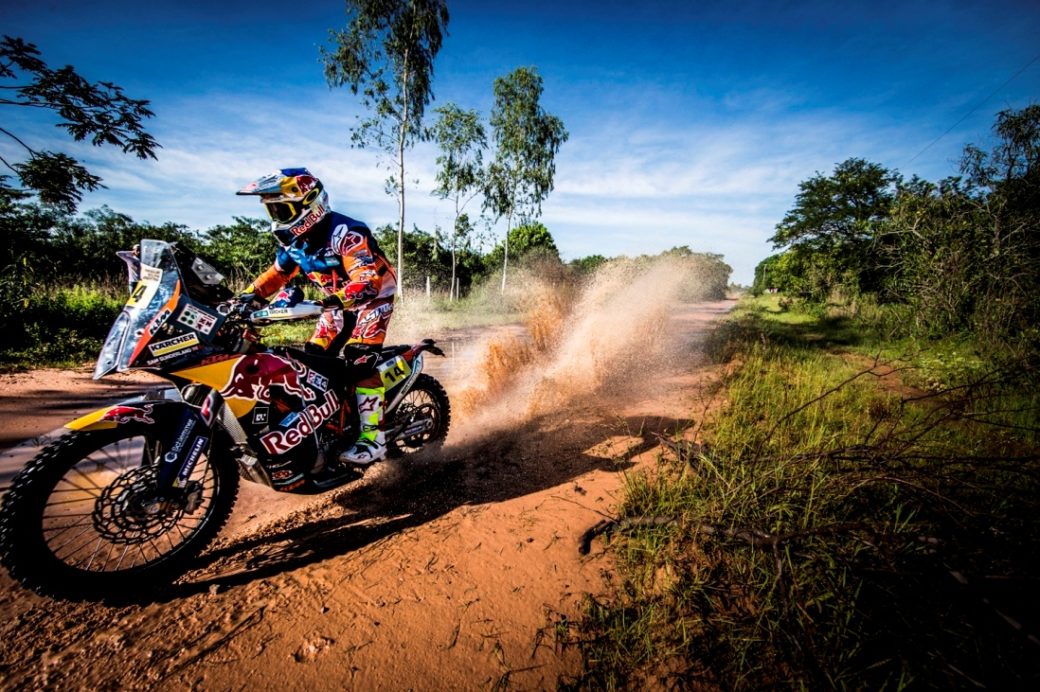 Red Bull KTM Factory Racing’s Toby Price, Sam Sunderland and Matthias Walkner, and KTM factory rider Laia Sanz all got their Dakar Rally 2017 bids underway on Monday, mindful of the fact that the journey is long and promises to be particularly arduous in this edition.

Riders started their almost 9,000 km trek through Paraguay, Bolivia and Argentina with an opening stage of 454 km, of which only 39 km was timed special.
In terms of time for the competing rally bikes this was just under half an hour under the clock, but they rode in temperatures of around 36 degrees Celsius and high humidity. It was a taste of what promises to be a huge difference in temperatures and terrain over the next two weeks.
Fastest of the KTM factory riders over the short timed stage was Sam Sunderland who registered a 28 minute 48 seconds on his KTM 450 RALLY to finish sixth but was only 29 seconds off the fastest pace. Matthias Walkner was eighth, 42 seconds behind while Toby Price, who encountered some dogs on the track, dropped one minute 25 to finish 17th in the tight-knit group at the front. Laia Sanz was 24th trailing by 2.25. In their brief foray into Paraguay the riders approached the technical and often trial-like tracks with predictable caution, bearing in mind that the result on Monday determined starting positions for a longer stage on Tuesday.
Sunderland said he was happy with his day but was pleased to be riding towards cooler temperatures. “I’m sure it’s going to be from one extreme to the other, so we’ll see how we go,” he said. ” I didn’t want to be too close to the front because it was a short stage and there was not a lot to gain but much to lose. Tomorrow I’m starting sixth and I’m pretty happy with that. It’s a good way to start the Dakar and we’ll just keep ticking off the days.”
Walkner, the popular Austrian KTM rider said he was happy to be back riding after a long injury break. “It was a pretty short stage but it was cool to get back in the rhythm. There was not really any navigation but it was also a long break (from riding) for me so it’s good that it has now started. The track was really bumpy and there were holes and ditches from the rain but on the first day there was not much to win. I think it really starts tomorrow. Now I have a good feeling and I am ready and well prepared.”
Price was also satisfied: “It was good today. I had to lead the stage out and that’s the first time I’ve got to do that at the Dakar. To do it out of Paraguay was really good. I had a couple of pet dogs on the track in the second half and that slowed us down a bit. But all in all I’m only a minute off the lead and its very, very early days and plenty more to go. Paraguay definitely set the tone and to be the first rider out is something I can put down in my own history book. Hopefully we can come back and do plenty more here.”
Sanz, the talented Spanish rider who had her best result yet at overall ninth in 2015 said she was happy with her first day out. “The position looks not so good but if you look at the riders close to me in the results, I think I can be happy. It’s a long race and today there was more to lose than to win.”
The overnight stop is in Resistencia (northern Argentina) and on Tuesday riders travel west to San Miguel de Tucuman. It is a long day’s ride of 803 km of which 275 is timed special in an area legendary for its fine dust, which, in the wet, quickly turns into mud. Organizers have urged caution in approaching the so-called “Chaco” region, which they say will require patience and a cool head to master.
Price, the Australian rider who won the rally for KTM in 2016 on his second attempt is well aware of what lies ahead. “Winning in 2016 means the target is very definitely on my back. In the Dakar lots of unexpected things can happen and everybody is going to be gunning for me. On the other hand once you have won it once, you know it is possible.”
Dakar Rally organizers have said that this year’s edition will be particularly difficult, with much of the first week in challenging high altitude and with new navigational challenges.
Results/Standings Dakar 2017 after 1 of 12 stages
Asunción – Resistencia: 39 km timed, 454 km total
1. Juan Pedrero Garcia (ESP), Sherco, +28:22 min
3. Ricky Brabec (USA), Honda, +12 sec
3. Paulo Goncalves (POR), Honda, +26
4. Sam Sunderland (GBR), KTM, +27
5. Joan Barreda Bort (POR), Honda, +30
Other KTM
6. Matthias Walkner (AUT), KTM, +40
8. Gerard Farres Guell (ESP), KTM, +46
19. Ivan Cervantes (ESP), KTM, +54
17. Toby Price (AUS), KTM, +1:23 min
24. Laia Sanz (ESP), KTM, +2:19 min
Dakar