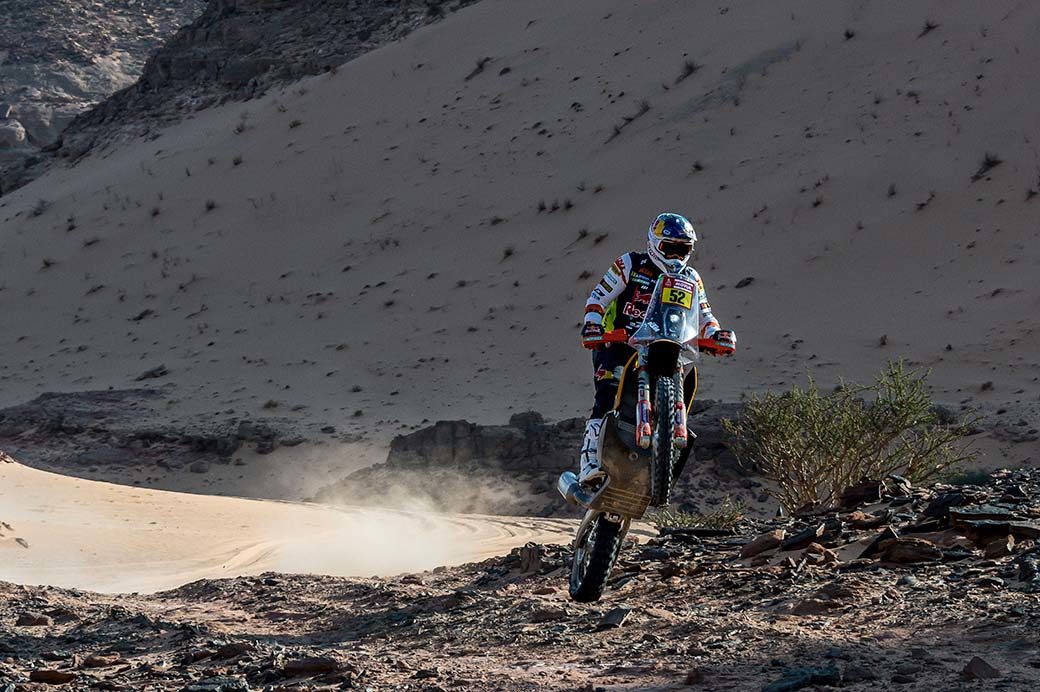 Continuing to deliver strong and consistent stage results, the Austrian star now sits over two minutes ahead of the second-placed rider.

Relatively short at a total distance of under 500 kilometres, and with a timed special of 287 kilometres, stage nine of the Dakar was made up of a fast, looped route close to Wadi Ad Dawasir. As the third rider into the stage, Matthias Walkner immediately took his time, focusing on his navigation to avoid making any costly errors. However, with the special proving to be relatively straightforward, Walkner knew he would have to push to stay in touch with his two rivals ahead of him. By catching them both by the finish, the experienced Austrian not only moved himself up into the provisional lead of the race but also lost the minimum of time to his closest competitors while also securing himself another strong start position for Wednesday’s stage 10.

Matthias Walkner: “It was quite a short stage today, but really, really fast. It wasn’t too difficult with the navigation and the boys in front did a good job, so it was quite hard to make up a lot of time. By the refuelling, I saw that I was a little off the pace, not too much, but I knew I would have to get my head down for the second half of the stage. It all seemed to pay off because I have taken over the lead of the overall and also my starting position for tomorrow is quite good. We’ve got three more really interesting days to come.”

Right on the pace from the very start of today’s special, Kevin Benavides placed within the top three for much of the stage, despite the times being exceptionally close throughout the top 10. Steering his KTM 450 RALLY to a runner-up result, the reigning Dakar Champion moves back up the provisional rally order to fifth, just over 10 minutes behind the leader. With three stages left to race and Kevin very much on form, the Argentinian hopes to be able to climb higher in the rankings to challenge for the podium places by the rally finish on Friday, January 14.

Kevin Benavides: “Stage nine was a really good stage for me. I felt really good on the bike and was able to push a lot. I expected the navigation to be a little trickier, but in the end, it was quite easy to choose the correct way. The guys in front did a good job of navigating so in the end it just came down to speed, and all the guys at the front ended up being really close on time. I finished second today, which will make tomorrow a little tougher. But I’ll focus on my navigation and with only three days left, my plan is to push all day, every day.” 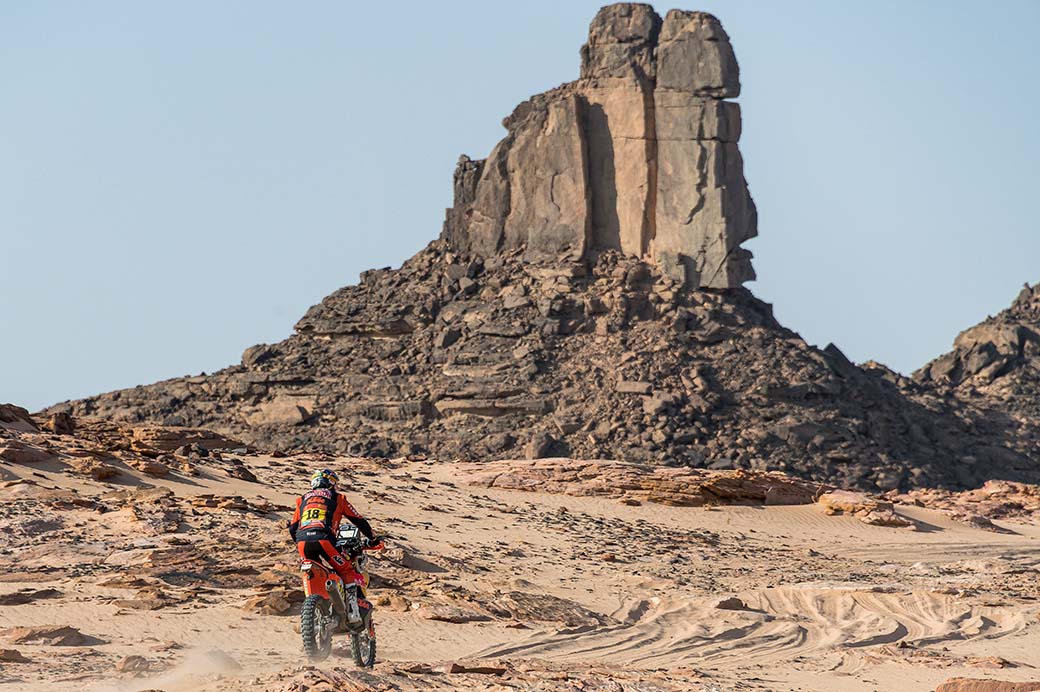 Another solid performance on stage nine saw Toby Price complete the timed special as 17th quickest, albeit only eight and a half minutes down on the winner. Lying just outside the top 10 overall, Toby hopes to use his start position on Wednesday’s stage 10 to elevate himself further up the rankings.

Toby Price: “It was a good day, I had a couple of little mistakes, but nothing too crazy. I’m starting a little way back tomorrow, so hopefully, I’ll be able to grab a little time back then. Other than that, the bike is good, I feel good, we’ll keep on pushing tomorrow.”

Danilo Petrucci once again showed his speed and class on stage nine of the rally, competitive on time and running for most of the day just outside the top 10. Losing a couple of minutes in the very final kilometres of the special, Danilo completed the day as 18th fastest, less than nine minutes behind the winner.

Danilo Petrucci: “I had a good day today. I’m really happy with my riding and was able to match the speed of the top guys for much of the stage. Unfortunately, I did have a small technical issue that caused me to stop a couple of times, but thankfully, I didn’t lose too much time. It might not be too much of a bad thing because I have a good start position for tomorrow now and I hope to be able to really push once again.”