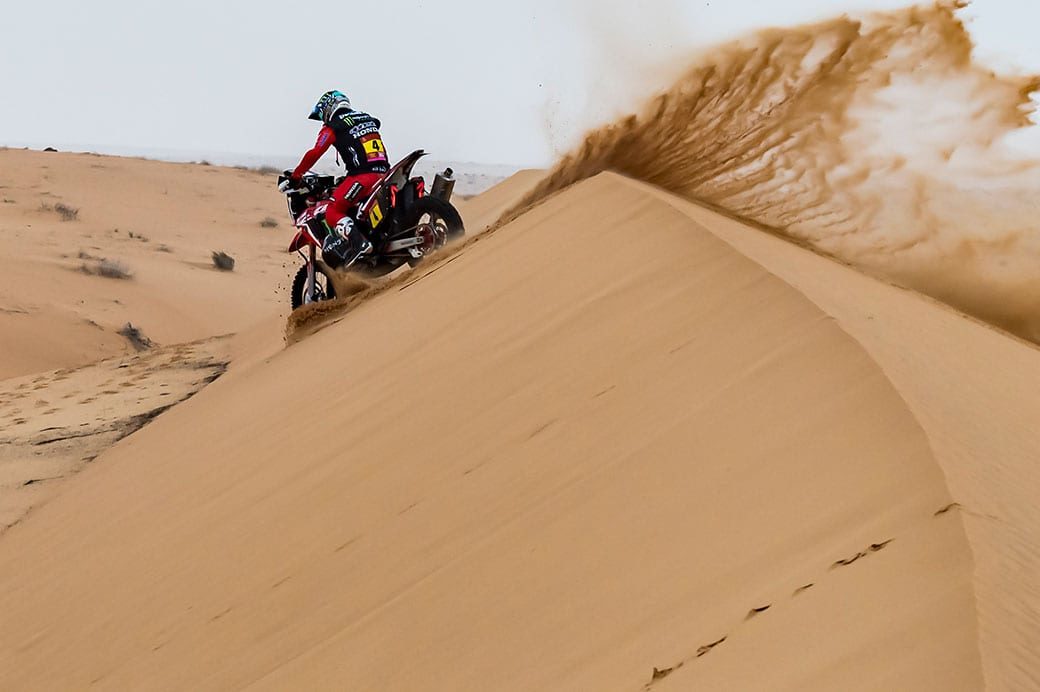 Monster Energy Honda Team’s Honda CRF450 RALLY bikes continue to steal the limelight at the 2021 Dakar. As the race resumed after the rest day, Ricky Brabec commanded the opening leg of the marathon stage, with Nacho Cornejo finishing behind him. The Chilean rider currently holds the rally leadership by a tight margin.

The second week of racing got underway with the first part of the Marathon stage, connecting the Ha’il bivouac to the Sakaka bivouac, which will be off-limits to mechanics and outside assistance. The day’s stage featured 471 kilometres against the clock out of a total of 737 kilometres. Upon arrival at Sakaka, riders were able to check the condition of their bikes and all reported arriving without issues. Today’s stage included mountains, sandy tracks, rocky areas and high-speed winding tracks.

It proved a favourable day for Ricky Brabec, who came out determined to play his strongest hand in a bid to keep any end-of-rally options open. Monster Energy Honda Team’s American rider reached the finish-line, registering the best time of the day, to claim a second stage win so far in this Dakar. The current champion lies eighth in the overall standings, 14 minutes behind the race leader.

Ricky Brabec: Today I had a good day. I didn’t expect to win the stage but I’ll take it. I started catching Joan by refuelling and he was like a 1 minute ahead. When I caught up, we opened the track together to the finish. I open the track tomorrow with my team-mate Nacho who finished second today.

José Ignacio Cornejo also had a noteworthy day. The Chilean – a fine navigator – finished with the second quickest time of the day and, after almost 29 hours of rallying, becomes the new Dakar overall leader with a single second advantage over the nearest second-placed rival. The rider from Iquique arrived problem-free at the parc fermé aboard the Honda CRF450 RALLY with the bike’s tyres still in good condition and will now prepare to tackle the second leg of the marathon stage.

José Ignacio Cornejo: I’ve finished the marathon stage well. In the first part I had some problems in the sandy area that was more difficult as it was wet. From then on, I managed to find my rhythm. Before getting to the refuelling I had a problem with the tank, I lost some minutes, but I was able to sort it out. After, I went all out to try to make up for the minutes I’d dropped. I did not make any navigation errors and was able to recover. I’ve taken over the leadership in the general standings, so I am very happy. At the moment the strategy is going well, but there are many days left and the fight is very close. So we will continue to take it day by day, as we have been doing up until now.

Joan Barreda was the first rider to set off from the Ha’il bivouac this morning. The Spaniard set a solid pace which, by the end of the special stage, had served as a damage limitation exercise. The rider from Castellón conceded just nine minutes to his team-mate and eventual stage winner Brabec. Joan currently holds sixth place overall, ten minutes off the leader.

Joan Barreda: One of my tyres is a little bit damaged, but I don’t think it’s going to be a big problem. I have been checking it all day and so far it seems to have been holding up pretty well. I hope that tomorrow will be okay for the second part of the marathon stage.

In fifth place overall, just ahead of Barreda, was Kevin Benavides, some 7’29” behind Cornejo, after finishing somewhat late on the day. However, the Argentine from the Monster Energy Honda Team will attempt to make up time and positions in the second part of the marathon stage that takes place tomorrow. In store will be a total of 375 kilometres of timed special, on a total stage of 709 kilometres, before arriving at the Neom bivouac.

Kevin Benavides: The stage today was really difficult for me. I didn’t feel comfortable on the bike today, maybe a little tired. I think rest day knocked me out of sync! But I kept a good pace until I had a navigation error at the end of the stage. I lost time but tomorrow I start back again so I will try to push to the front!