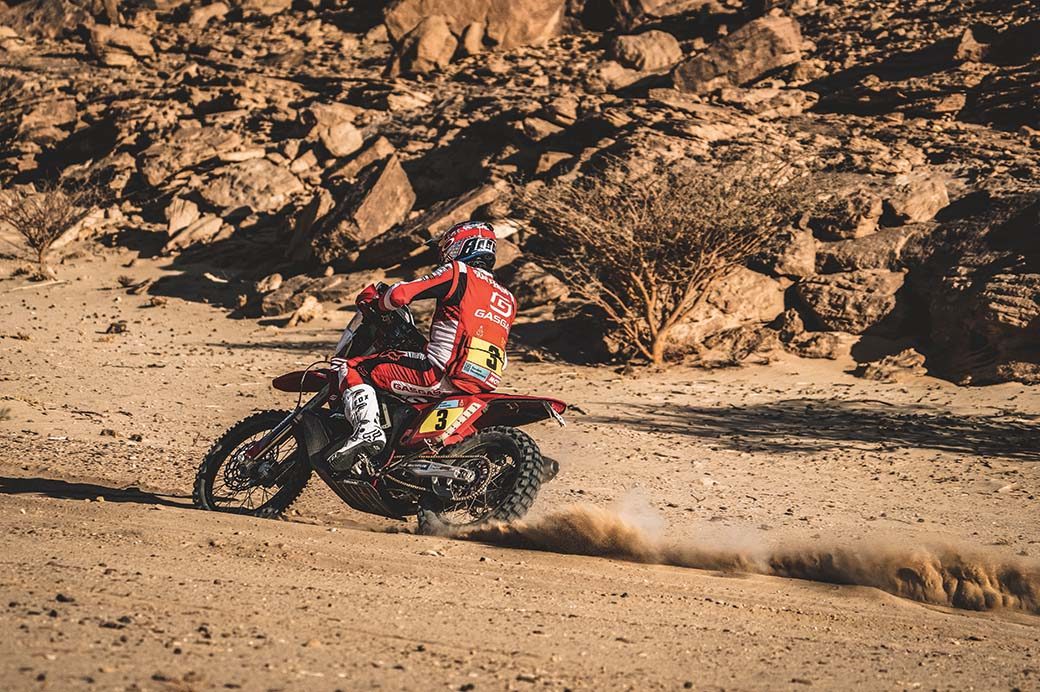 An outstanding ride on the penultimate stage leaves one day and just 163 kilometres of racing between battling Brit Sam Sunderland and Dakar history.

GASGAS Factory Racing said stage 11 would be a pivotal day of racing at the Dakar and, oh boy, it sure was!

After losing a little time yesterday, the pressure was well and truly on Sunderland today, who in no uncertain terms needed to deliver a flawless ride to keep his chances of a second Dakar win alive.

And that’s exactly what he did. Putting together a standout performance, Sam navigated perfectly, attacked from the start, and finished second on the stage, just four seconds behind the eventual winner. Now, with just one day of racing to go, the GASGAS Factory Racing ace sits at the top of the leaderboard with a near seven-minute advantage over his nearest rival.

“Today was a really tough one,” said Sunderland. “We were expecting it to be difficult and even four kilometres in there were lines everywhere in the sand.

“From there on I had to focus on myself and stay on top of my roadbook, it wasn’t really an option to follow the lines ahead.

“Through the dunes, I was able to make up some time, which was good and I just missed out on another stage win.

“Up until now, the race has gone really well, the whole team behind me has been fantastic but the race isn’t over until it’s over. All I can do is hope for a clean run through tomorrow’s stage and then we’ll see where we end up.”

In rally racing, starting any stage a handful of riders behind the first rider generally proves to be an advantage, but with the navigation incredibly tricky on today’s penultimate stage of the rally, it was every man for himself out there in the desert.

Opting to focus solely on his roadbook throughout the challenging 345-kilometre special, Sam was in superb form, narrowly missing out on the stage win but more importantly, now leads the rally heading into the final, decisive day of racing. It’s go time!