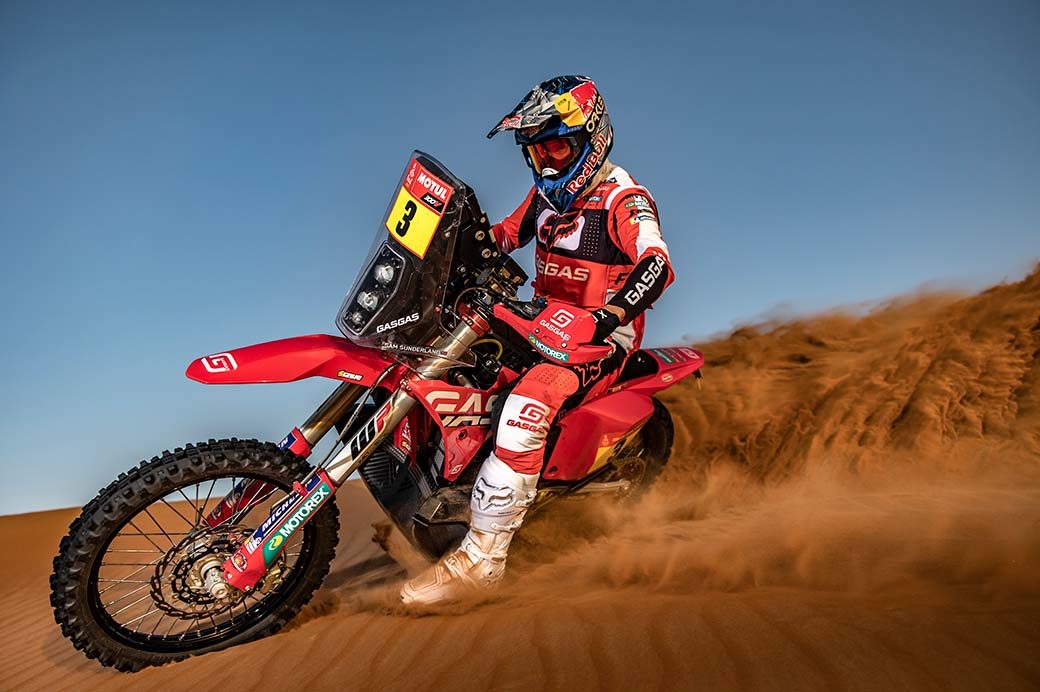 Well, this is a biggie! Adding even more talent to the GASGAS global racing efforts… Sam Sunderland will join Daniel Sanders under the GASGAS Factory Racing awning in 2022.

Undoubtedly a pair of heavy hitters on the rally scene, having finished third and fourth respectively at the 2021 Dakar Rally, the dynamic duo are ready to chase glory in the upcoming 2022 event in January before taking on the FIM Cross-Country Rallies World Championship!

Former Dakar Rally winner Sam Sunderland needs no introduction. The Brit has dedicated much of his life to the sport of rallying, lifting the Dakar winner’s trophy in 2017. Since then, Sam has been crowned FIM Cross-Country Rallies World Champion in 2019 and continues to fight for that coveted second title at the Dakar. Sunderland was back to his best at the 2021 edition of the event where he remained in contention for victory until the very last day. With a focus on adding another Dakar win to his resume, the Brit has all the tools needed to get the job done.

Daniel Sanders strengthens the team for what will only be his second full season of rally racing. Beginning the year with a seriously impressive fourth-place finish at the 2021 Dakar, the Aussie then went on to claim the bronze medal in the FIM Cross-Country Rallies World Championship. Not bad by anyone’s standards, especially for a rookie! We really can’t wait to see what he can do next year with all the experience that he’s gained throughout this season. 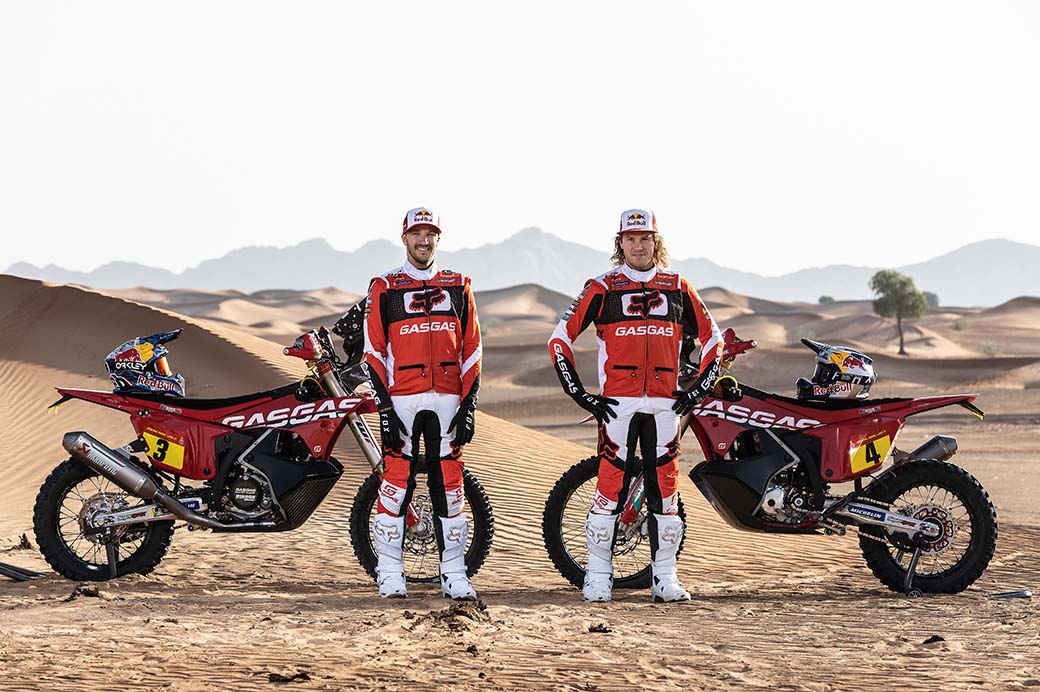 Both riders are now busy preparing themselves ahead of the 44th edition of the Dakar Rally, which kicks off on January 1, 2022. They’ll then take a short break before gearing up once again for the opening round of the FIM Cross-Country Rallies World Championship, which is scheduled to start sometime in the spring.

Sam Sunderland: “It’s super exciting for me to be joining the GASGAS Factory Racing team. It’s a relatively new team but with strong foundations and a lot of expertise behind the program. For sure it’s a new challenge and a new opportunity for me and it gives me a lot of confidence being within similar surroundings, so I can focus on the job at hand. So far, everything has been really positive. I’ve been fortunate enough to have spent some time on the bike recently and I can’t wait to start racing. My goal is to win the Dakar again and claim the first win for GASGAS too, so I’m really motivated and excited for the future. It’s cool to be racing in new colours and I’m looking forward to coming out swinging at the Dakar on the red bike.”

Daniel Sanders: “Being able to be one of the faces of GASGAS for another year, especially alongside Sam, is really cool. I’ve just finished up my first full season of racing rally and I’m certainly looking forward to another! It’s not all that long until the Dakar starts and with the world championship coming up pretty soon after that, it’s going to be another busy year. I’ve learned so much in 2021 and I’m excited for the future, the opportunity that I have, and I can’t wait to get started again. Let’s go!”

GASGAS Motorsport Director Pit Beirer: “It’s a huge moment for GASGAS to have both Sam and Daniel on the Rally team. What started off as a small project with Laia, and then with Daniel, has now become a much bigger effort. Signing a former Dakar winner in Sam, and having quite possibly the best young talent in rally at the moment in Daniel, really shows a clear statement that the brand is ready to compete for victories and grow its presence further in rally. It’s really exciting for GASGAS to have two great riders that are both capable of winning in 2022 and I wish them both the best of luck for the Dakar Rally and 2022 season.” 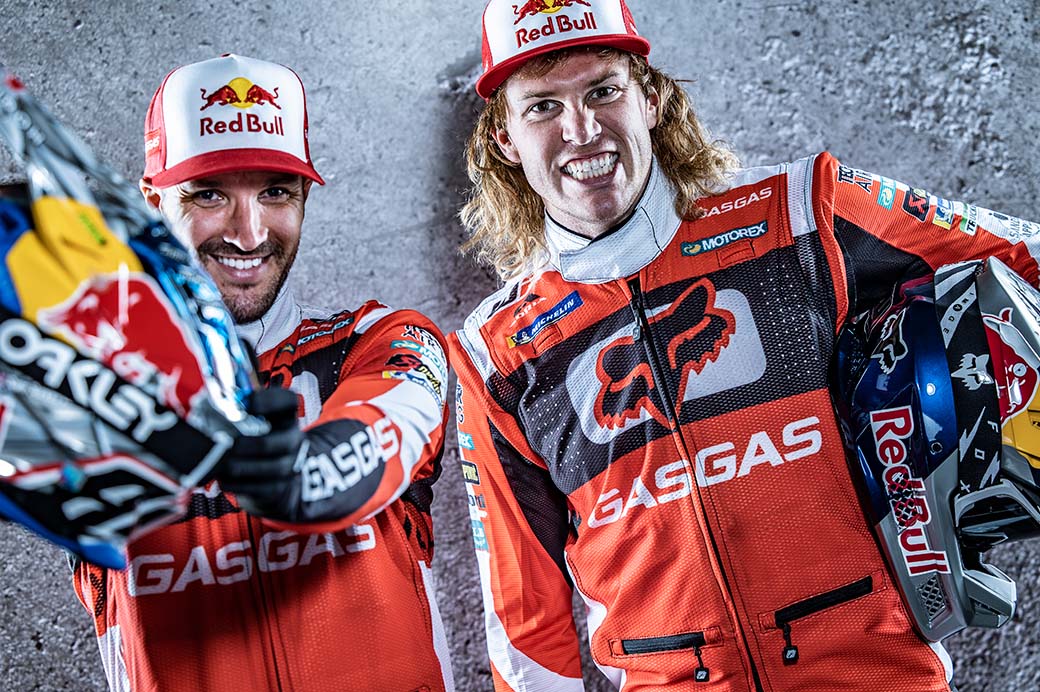 Team manager Norbert Stadlbauer: “It’s great to have two very talented riders racing for GASGAS next season. They are at different stages of their careers, yet they both have the talent to win. Sam is very experienced, and his career achievements speak for themselves. He knows everything there is to know about rally and this will help him to succeed in 2022. Daniel only has one full season of rally racing under his belt, but he has picked things up really quickly. He doesn’t have the experience that Sam has but he’s a very quick learner as we have seen in 2021. They’re both fast, motivated, and capable, so we fully expect to see them battling for success at the Dakar and then in the FIM Cross-Country Rallies World Championship next year.”