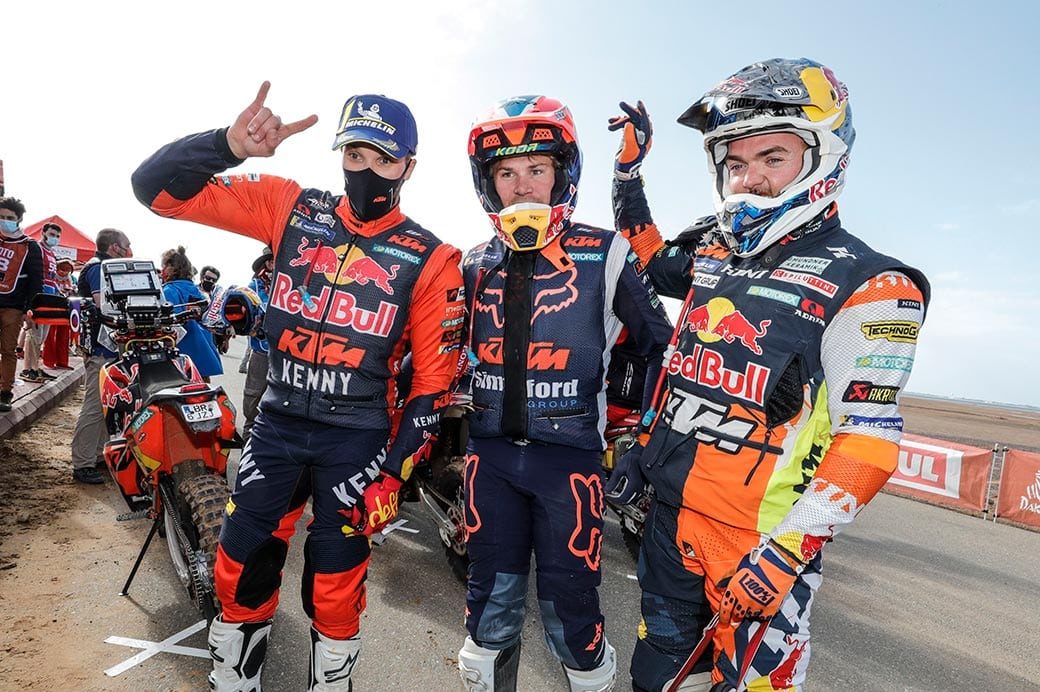 The 43rd edition of the Dakar Rally proved to be one of the toughest in its history. With organizers delivering a punishing route across the entire 12 days of competition, the event included a wide variety of terrain together with some of the most technically demanding navigation seen in recent years.

Red Bull KTM rider Sam Sunderland rode an intelligent race right from stage one. With the difficult navigation proving to be hugely challenging to all, especially to those leading the way at the front of each stage, riders encountered sizeable swings in time advantages depending on their start position.

Sunderland, using his vast experience, chose to maintain a solid but steady pace through the first half of the race, with the Brit lying sixth overall at the halfway point. Increasing his pace after the rest day, and taking the challenge to those ahead of him, the KTM 450 RALLY rider placed third overall by day seven and moved up to second on the penultimate stage.

In winning stage 11, Sam had the unenviable task of opening the 12th and final timed special. Trailing rally leader Kevin Benavides by five minutes going into the stage, the 2017 Dakar winner had no option but to push as hard as he dared during the final 200km as he raced against the clock. Unfortunately, a small error that resulted in him losing almost 10 minutes ended Sunderland’s charge for the win. Despite the setback, Sam safely arrived at the finish to claim an impressive third place overall. Although disappointed not to have secured a second career win for himself and KTM, the Brit was happy with how his race had gone.

Sam Sunderland: “I did my best over the whole rally, so I can’t be too disappointed, I guess. It was always going to be hard setting off first this morning and I knew I had to push hard to make up those minutes. I couldn’t find one waypoint early on in the dunes and lost far too much time trying to find it. There is always a fine balance and when you push your speed, the navigation can lose out.

“I’m super happy as I know I gave it my all. The other guys did a great job and after what was such a tough event with several crashes and people being forced to retire with technical issues, I’m glad to be here safe at the finish line and in third place.

“I honestly think that has been one of the toughest races I have ever done – the pace at the top is so high, we’re having to fight every single day and there is no time to relax.

“Congratulations to all those who finished and get well soon to those who crashed out.”

Unfortunately losing time early on in the rally, Matthias Walkner was forced to play catch up from day two. Despite trailing the leaders by over two hours, the Austrian stayed focused, putting in strong rides on each subsequent stage to steadily fight his way back up the standings. Sitting just outside the top 10 following the penultimate day of racing, an impressive performance by the 2018 Dakar champion on stage 12 saw him move up two places in the overall standings to a highly commendable ninth.

Matthias Walkner: “I’m happy to be here at the finish of another Dakar Rally. Yeah, I’m a little disappointed over what happened on day two, but when you look at what some of the other riders had to face, it’s not so bad. After losing over two hours early on, I knew fighting for the podium would be almost impossible. From then on, my plan was just to take each day as it comes and aim for good stage finishes and a nice, safe end to the race. To finish ninth overall is really good, especially with such a high level of competition. Now I’m hoping we can get more racing done this year and come back next Dakar for a better result.”

Contesting only his second ever cross-country rally, Daniel Sanders came into his first Dakar as a true rookie. The KTM Factory Racing junior rider impressed right from the start however, demonstrating incredible speed on the opening Prologue. From there, Sanders went on to mix it with the established Dakar specialists, claiming no fewer than five top-five stage results and showed great maturity over the entire event.

Daniel Sanders: “All-in-all it’s been a pretty perfect first Dakar for me. It started off with a good Prologue and then day-by-day I learned a little more and gained as much experience as possible. I’m really pleased to come away with fourth overall and as first rookie, so that’s cool

“I’ve only really spent four months on the KTM rally bike, learning as much as I can for this, so I can’t thank Jordi and the whole team enough for all the hard work they have done and the faith they put in me. It’s pretty much what I expected as I came into the race ready for it to be really tough.

“The first few days weren’t so bad – yeah, the navigation was tricky, but it wasn’t till about day five or six that we had some hugely physical stages in the dunes. That, and after a couple of crashes, my body really started to hurt. It’s all been worth it though, I’m over the moon with my result and glad I’ve been able to gather all the information together and come away with a strong finish. It’s been the toughest race I’ve ever done, but I’m already looking forward to the next one!”

KTM Rally Team Manager, Jordi Viladoms: “Overall, I’m pleased with how the rally has gone. After fighting for the whole race, to come away with a podium is positive, but of course we had hoped for more. Clearly, this event has been hugely challenging for all competitors, a true test of character and a true test of not only the riders but all of our team. I’m very proud of the effort everyone has given.

“Hats off to Sam, he was super consistent throughout the rally, giving his all. Working his way up the overall results wasn’t easy, but he did what he needed to do and really dug deep when it mattered.

“For our junior rider Daniel Sanders, to get fourth position is an incredible result, especially with the level of the other riders being so high at this year’s event. We’re really happy for him, especially after only four months of preparation.

“Matthias’ result, finishing ninth after the issues he had early on, is a testament to his quality as a rider. In the end we’re happy with how the whole team has performed at this race – everyone has worked very hard, the bike has been working very well, and all the riders have had a great attitude.

“Of course, it was a shame to lose Toby from the race, especially as he was the rider with the most potential at the time. Thankfully, he wasn’t too badly hurt, and we look forward to having him back as soon as possible.

“Finally, I also want to mention Skyler Howes, our supported rider, who also did a great job to finish fifth. He really showed some very fast speed on some of the stages.”