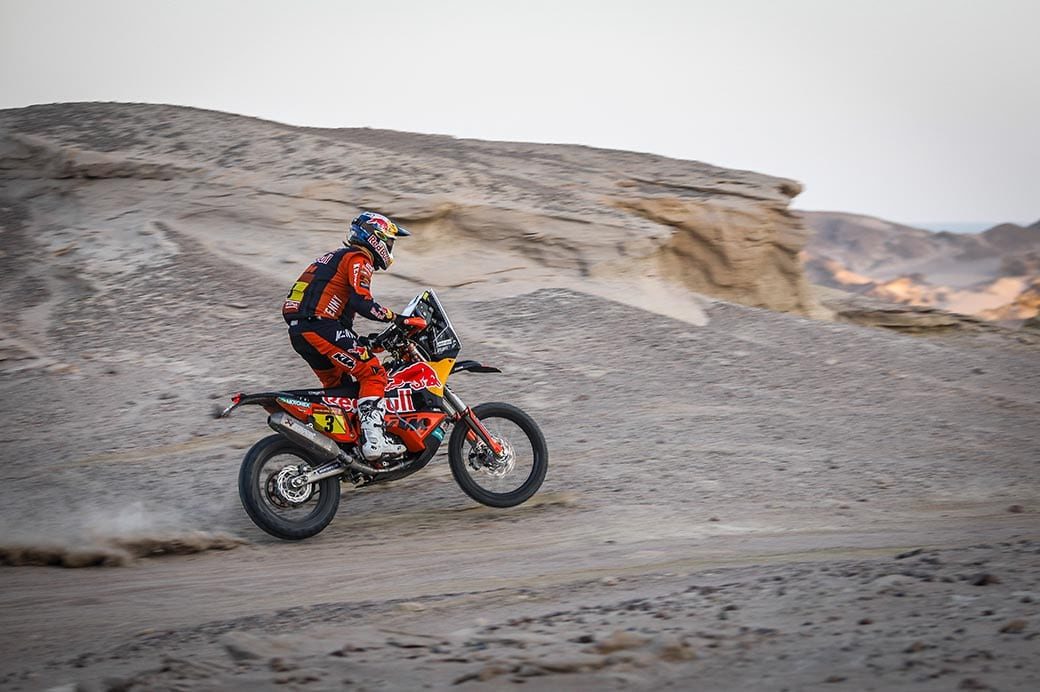 Red Bull KTM Factory Racing’s Sam Sunderland and Matthias Walkner have successfully completed an eventful stage nine of the 2021 Dakar Rally where unfortunately, due to a crash around kilometre 155, Toby Price was forced to retire from the event. KTM Factory Racing’s Daniel Sanders placed ninth on the demanding timed special.

Featuring a loop stage starting and finishing at the coastal city of Neom, day nine at the 2021 Dakar turned out to be a testing one for the Red Bull KTM Factory Racing team. Covering a total distance of 579km, riders faced a 109km liaison that led into the 465km timed special. A mixture of fast gravel tracks and sandy valleys proved to be a huge challenge to all competitors as they made their way through the stage.

Third overall coming into stage nine, Sam Sunderland was the fourth competitor to take to the start of the special. With times between the top riders being very close, the Brit successfully passed the first three checkpoints inside the top five.

Two kilometres from the fifth checkpoint, Sam unfortunately came across team-mate Toby Price who had crashed heavily and needed medical assistance. Staying with Price until he was airlifted to hospital, Sunderland then continued on with the remainder of the stage. Finishing in a commendable fourth place once his time lost helping Price was recovered, the 2017 Dakar Champion lies third in the provisional overall standings. 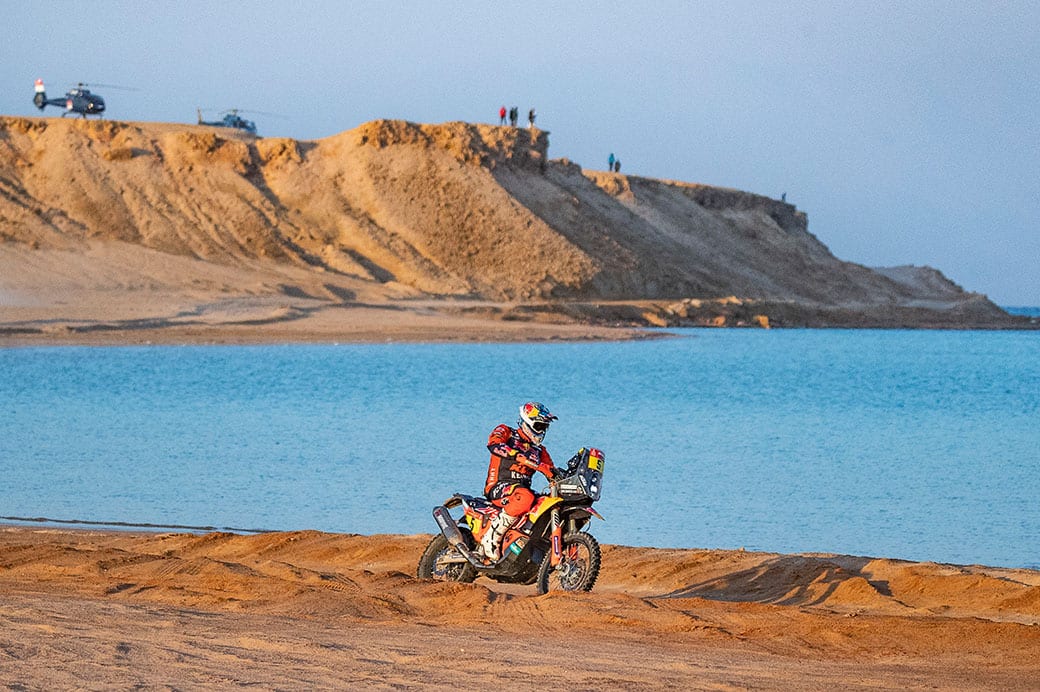 “Obviously, it’s been a pretty rough day today,” Sunderland said. “I started off strong, and was making good progress, handling the tricky navigation well. Then I came across Toby lying in the riverbed with Brabec already stopped with him. I helped there till the helicopter arrived then set off again and tried to get back into a good rhythm.

“Around 100 kilometres or so after that I was opening up for the group I was with and was looking down at the road book, hit a rock and was sent over the handlebars. It was quite a big crash, quite a big impact, and luckily I wasn’t too badly hurt. But I damaged the road book tower on the bike had no navigation from then on. I managed to reach the finish by following others but that’s always hard. A really tough day for the team, but this is Dakar and it’s always a challenge. We’ll regroup and do our best again tomorrow.”

Enjoying the start of stage nine as riders raced along the shoreline close to Neom, Matthias Walkner put in a strong performance, maintaining his position inside the top 10. As the terrain switched to more technical rocky tracks and riverbeds, the Austrian rider eased his pace so as not to make any mistakes on the high-speed special. Opting for a safe finish to the stage, Walkner placed sixth at the line, just over 14 minutes down on the day’s winner.

“Yeah, it’s been a really, really tough day through lots of canyons with rocks everywhere,” said Walkner. “In the beginning it was very enjoyable, starting close to the ocean and then heading into a nice valley. But then when we came into the stony pistes it was a lot more challenging and I just tried my best to stay safe through there and make it to the finish line. I’m happy with how I rode, but obviously with my friends and team-mates having crashes today, it is not such a good feeling. I wish them all the best and will try to focus again for tomorrow.”

KTM Factory Racing’s Daniel Sanders showed great speed throughout stage nine – the young Australian continuing to learn and improve his navigation and road book skills. Unfortunately, suffering a couple of crashes in the stage, Sanders lost a little time on his rivals. Nevertheless, in completing the stage as ninth fastest, Daniel now sits in sixth overall in the provisional standings. 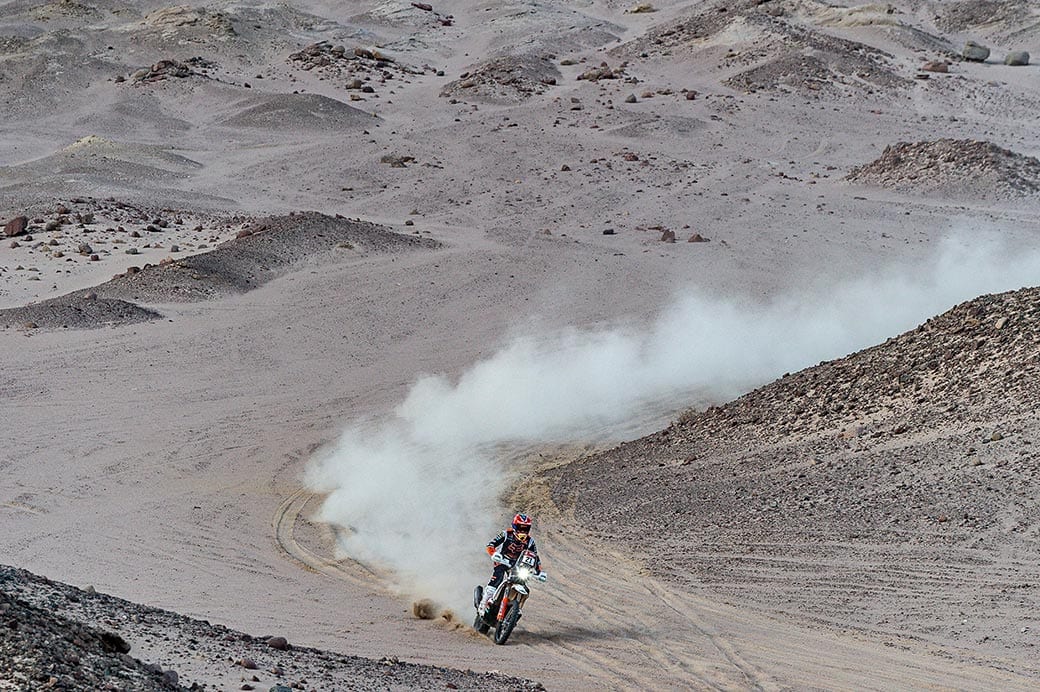 “It was a really hard day today,” said Sanders. “It started off nice on the beach with some cool sand tracks and I got into a nice rhythm and felt good on the bike. Then at the 50-kilometre mark I had a crash in the rocks, snapped my gear lever and banged myself up pretty good. I got going again but had lost all the water out of my water pack, so it was a bit of a thirsty day today. Then when I came across Toby, I stopped quickly just to make sure he was okay before carrying on to the finish. I did have another crash, which bust the bike up a little, but I made it back okay. There’s still three days to go, so let’s see what happens tomorrow.”

As the former leading KTM rider at this year’s event, Toby Price was well placed to fight for the event’s final podium positions. Unfortunately, while pushing hard, right at the front of the field on today’s special, the experienced Australian suffered a fall around the 155-kilometre mark and required medical attention. Airlifted to the hospital in Tabuk, and confirmed to have suffered a broken collarbone, the two-time Dakar winner will sadly play no further part in this year’s event.

Stage 10 of the 2021 Dakar Rally, totalling 583km, heads south from Neom towards AlUla. On the 342km timed special, riders will have to carefully navigate the twisting, sandy tracks that lead through the picturesque valleys and rock formations of the area.

Update January 13, 10:28 GMT: Toby Price posted an injury update from his hospital bed this morning… “Well, I’ve finally broken my 30th bone,” he exclaimed. “Crashed out in Stage Nine yesterday, I don’t remember much but I’ve got a pretty sore collarbone, shoulder and hand and will need surgery for that… Disappointed to not make the finish and let down the KTM Factory Racing team and my sponsors but that’s racing unfortunately this time around. Thank you Sam Sunderland and Ricky Brabec for stopping to help me, I was off with the fairies that day but I heard you took good care of me!”