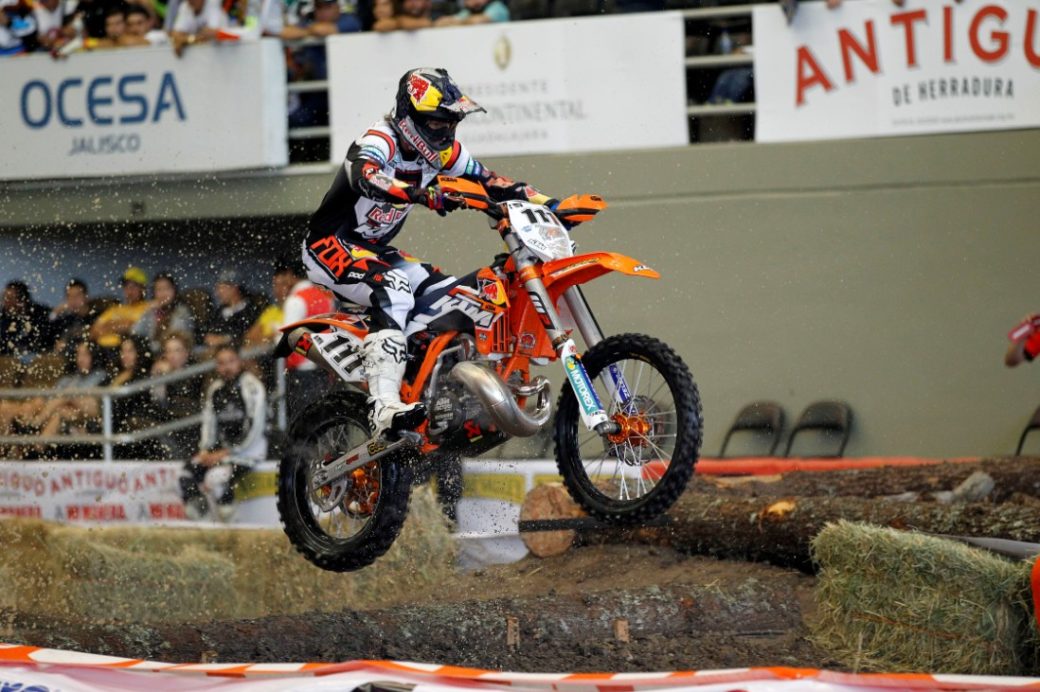 It’s elbows up as the opening round of the 2015/16 FIM SuperEnduro World Championship gets underway in Lodz, Poland on Saturday December 5.

Gearing up for one spectacular series of racing, the championship has all the main players itching for action. Defending champion Taddy Blazusiak (KTM) naturally leads the way to his home round, but he’s joined by Jonny Walker (KTM), AMA EnduroCross champion Cody Webb (KTM), Husqvarna’s Colton Haaker and KTM duo Taylor Robert and Alfredo Gomez among others.
Aiming for his seventh consecutive indoor title, Blazusiak returns to racing following illness. Laid up with the Epstein Barr Virus, the Polish rider is feeling confident about his chances inside the Atlas Arena on Saturday night.
“SuperEnduro in front of my home crowd is always something special. Poland is my home country and I love the guys there, the fans and the whole motorcycle racing community,” said Blazusiak.
“For me it’s all about trying to win. I’m fighting for my seventh world title from SuperEnduro and I’m really motivated to give it my all again.”
Ready to put a serious dent in Blazusiak’s plans, Walker is hoping to pick up where he left off at the end of the last series by winning.
Storming to victory at the recent Enduro Extreme Indoor in the UK, Walker knows he’s got to hit Blazusiak where it hurts most and that’s beating him in Poland.
“I was pretty happy with the way I rode in Stafford,” Said Walker. “I was relaxed during the evening. I had a good flow and my starts were on point too.
The speed is there and I’m excited for Poland.”
One of the danger men to prevent Walker or Blazusiak reaching the top step of the podium is Cody Webb. Fresh off the back of his AMA EnduroCross Championship winning season, Webb will look to make a run at the SuperEnduro title too, having ended the 2014/15 season as runner-up.
Haaker hopes to get in the mix too along with Robert – both race winners in EnduroCross during 2015. Alfredo Gomez makes his KTM debut in Poland and aims to impress while Paul Bolton (KTM) – sixth overall in 2014/15 – will take to the Prestige startline.
In the Junior category there’s plenty of British interest in Poland. Gethin Humphreys (Husqvarna), Josh Gotts (TM) and Jack Edmondson (KTM) are all in the mix.