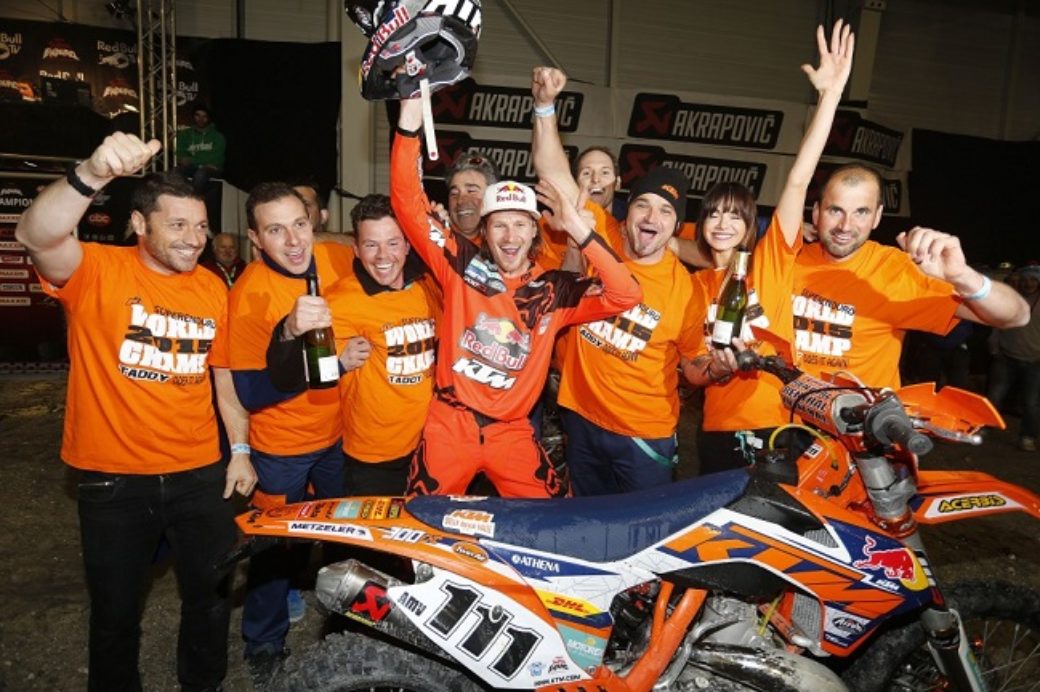 Red Bull KTM’s Taddy Blazusiak wrote himself another chapter in his book of sporting achievements on Saturday night in Cahors, France when he sealed a record sixth FIM SuperEnduro World Championship title in the final round of the competition.

Blazusiak won the title ahead of Cody Webb and Jonny Walker to give KTM the podium sweep. Line honours in the final GP went to Walker with Webb and Blazusiak taking the minor places

Blazusiak, who went into the last round with an impressive points lead, secured the title after the second of three heats. He took the cautious approach in the opening heat but in the second race, where riders start in reverse order he was fast out in front and second place was enough for him to settle the championship. He wrapped up his night with a 3-2-3 result and also crowned his evening with a win in the Superpole.

When asked how he felt winning his sixth SuperEnduro crown Blazusiak said: “Each title has its own story. I have really been working for this one and it’s great after all the injuries and all the hard work. I just love what I do and I hate to lose. The game plan tonight was just to collect points and to stay out of trouble. I feel like I’m on top world right now. Coming into this race I knew I was in the perfect position to wrap up the title – I had a healthy points lead – but I still felt some pressure to get it done. Crossing the finishing line as world champion for the sixth time in a row is amazing. Overall it’s been a fantastic season – four GP wins and a world championship – and I can’t thank KTM, the team and everyone involved enough for the effort they put in.”

It was also a big night out for KTM with Blazusiak’s factory teammate Jonny Walker who won his first GP in the discipline finishing third in the championship while American Cody Webb, also KTM, was second in both the GP and the championship.

Jonny Walker: “It’s amazing to eventually get the win and to finish third in the discipline. This year I learned a lot and I’ll come back strong next year. I’ve been chipping away at getting an overall win and now finally it’s happened. In Brazil I was so close but then it all fell apart in the final race. Here in France I felt good on the track from practice. It was a tight and tough track but it seemed to work for me and I got on with the job. I had a good race one but silly mistakes held me back. Then race two I got to the front and took the win. I knew the overall was on the line leading into the final race and this time around I made sure I didn’t do anything stupid. Once I got my nose in front I rode smart and got my first SuperEnduro overall win. It’s been an eventful season. I’m happy to have salvaged third in the championship and can now look forward to focusing on extreme enduro for the rest of the year.”

Walker’s win made up in part for the disappointment in Brazil when he was in line for the GP win but went off track and got a banner hopelessly entangled in his rear wheel. He was disqualified for what was deemed outside assistance.

Webb continued what has also been an exceptional first season in SuperEnduro and looked strong and challenging throughout the evening competition. “I really wanted that overall win but Jonny just had the edge on me in the final moto. I knew the points were close but I couldn’t get to him to try and fight for the overall victory. But I’m happy that I’ve been able to end the year as runner-up in the championship. It’s been a great first full season of SuperEnduro for me – races wins, the overall victory in Brazil and finishing things off with second overall in the series.”

Championship points after Round 6