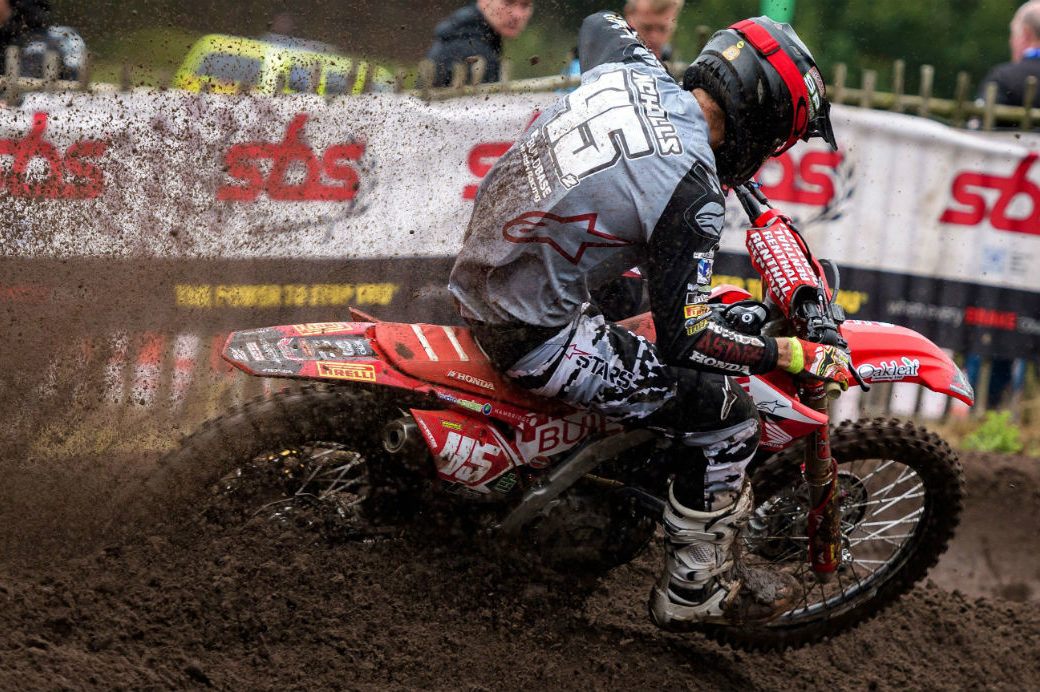 Following the devastating news that he’ll be off a bike until at least April, Buildbase Honda’s Jake Nicholls has spoken at length about the nightmare he’s had to endure since breaking his leg at Blaxhall at the end of September.

The 28-year-old – who could only watch as Evgeny Bobryshev overturned his 39-point MX1 class lead at the final round of the Maxxis at Lyng in October to take the title – was hoping to be back up to full speed for the start of this season. Instead, he’s likely to miss the first two rounds of the 2019 Maxxis series after picking up a bone infection.

“I did my leg the last weekend of September and after five-and-a-half weeks I was in a lot of pain,” he said. “It never really settled down so I went back to hospital and they found an infection in my leg – it was a compound fracture and the skin was infected.

“I went to hospital to have that cleaned up and while they were doing that they discovered that the bone was infected so they had to take the rod out of my tibia along with the four screws that were holding it in place. This caused a kind of little re-break.”
Following this traumatic procedure, Jake still faced further surgery.

“After seven days in hospital they then had to go in again, clean everything out and cut a load of skin away.

“They then pulled the skin across, sewed it up and waited to see if it would take. If it didn’t they were going to take a lump of skin from my thigh and place it on top of the affected area – it’s what Mel Pocock had on his hand.

“They call it a burger because it looks like a bun and never really blends in with the other skin – luckily, they had enough skin on my shin for both sides to meet each other although they were unsure of that until the week before Christmas.

“I was put in a cast from my ankle to hip which came off on New Year’s Eve when they put a smaller cast on.”

Jake got some more good news on January 3 when x-rays showed that the break is healing – although progress is slower than he had hoped.
“It’s straight and in-line but, obviously, there’s nothing holding it together anymore. From what I’ve been told the tibia is a very hard bone to heal because it’s so long and it’s so far from your heart. It’s actually harder to heal than a femur.”

Jake’s now set his sights on returning for round three of the Maxxis at Canada Heights at the start of May. Despite the limited bike time he’ll have had, physically he should be in good shape as – even when he was in a full cast – he kept training.

“Dave [Thorpe] just wants me back 100 per cent so I’m going to miss at least the first two rounds so the championship is over.

“I’ve been training for the last six weeks as if I was going to be at the first round which with a cast up to my hip has been pretty interesting. I’ve been doing an hour at a time on a rowing machine with my bad leg sliding along the floor by the side of it just in my pants with all the doors open and a fan about 20 inches away from my leg so I don’t sweat too much.

“It’s been really tough. It’s was bad enough when I did it and lost the championship but now I’ve just to crack on with the recovery process and make sure I come back decent.

“I’ve got a picture of Bobryshev coming across the line at Lyng that was in DBR taped to the front of the rower so I’m motivated.”