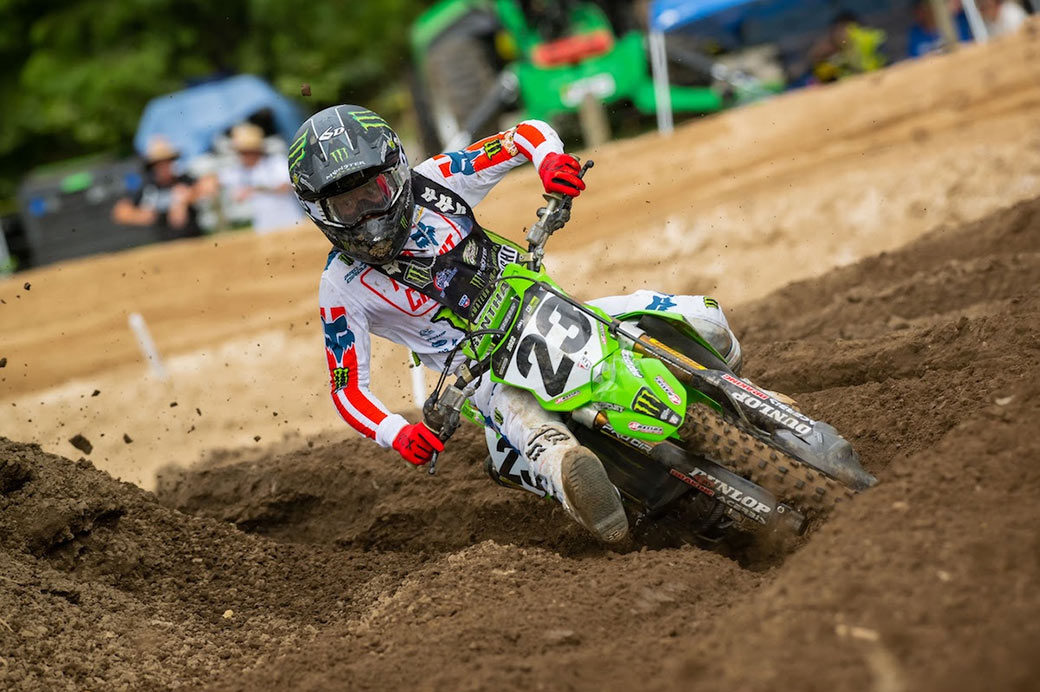 The journey to crown 36 AMA National Champions took another big step on Thursday at Tennessee’s Loretta Lynn Ranch, as the second moto for 23 classes unfolded at the 41st running of the Monster Energy AMA Amateur National Motocross Championship.

The third day of racing was destined to be one of the most important outings of the week as every gate drop played a key role in how the championship battle in each respective class will play out.

After a thrilling first moto that saw NSA Yamaha Factory Amateur Team rider Gavin Towers and Monster Energy Kawasaki Team Green’s Ryder DiFrancesco go bar-to-bar to the checkered flag, Thursday’s Moto 2 presented a major opportunity to move into an advantageous position in the quest for one of Loretta Lynn’s most high-profile class championships.

While Towers emerged with the early advantage, there’s no doubt that DiFrancesco has consistently been the fastest rider at the Ranch this week, even if his results don’t necessarily show it. The one thing holding DiFrancesco back were his starts, but he turned that fortune around to start Moto 2, where he emerged in second behind Rockstar Energy Husqvarna Factory Racing’s Talon Hawkins.

The lead pair showed tremendous pace early in the moto, which allowed them to build a gap over the rest of the field, where Towers led the way running in third. Despite consistent and relentless pressure from DiFrancesco, Hawkins showcased why he’s another one of the sport’s top prospects by continuously fending off the Kawasaki rider. The gap between the leaders hovered between one to two seconds and as they started to encounter lapped traffic it allowed GASGAS Factory Amateur Team’s Caden Braswell to make it a three-rider affair.

Braswell’s pressure on DiFrancesco from third forced the Kawasaki rider to pick up his pace and he responded with a pass on Hawkins in the closing minutes of the moto. On the ensuing lap Braswell made the pass on Hawkins for second. Once out front, DiFrancesco continued to push as Braswell kept him within striking distance. The Team Green rider successfully captured his second moto win of the week by a few bike lengths over Braswell, while Hawkins rounded out the top three.

After a dramatic opening moto that saw a mixed bag of luck for many of the class’ top riders, 250 B returned to the starting gate for its second moto still very much up for grabs. MJ Racing’s Matti Jorgensen took the Moto 1 win, while Monster Energy Kawasaki Team Green’s Preston Boespflug, NSA Yamaha Factory Amateur Team’s Evan Ferry, and KTM Orange Brigade’s Daxton Bennick were in the mix as well. Meanwhile, Monster Energy/Star/Yamaha Racing’s Haiden Deegan was simply looking to make a statement after a DNF in the opening moto.

Off the start Ferry did what he needed to do and put his Yamaha into the lead with the STACYC Holeshot. Bennick slotted into second, while Jorgensen settled into third. Unfortunately, the Moto 1 winner encountered misfortune and went down in a rut, which dropped him outside the top 10 and put EBR Performance Yamaha’s Julien Beaumer into third.

Back out front, Bennick picked up on faster lines and started to apply pressure on Ferry. The KTM rider made the move happen just a few laps into the moto and quickly put some distance between he and the Yamaha. As that unfolded, Deegan was on a charge from a 10th-place start that saw him make a savvy pass on Beaumer for third. Deegan then put in a long and persistent pursuit of Ferry for second and successfully moved into the runner-up spot in the closing stages of the moto.

Bennick’s pace out front made him the class of the field in this moto and while Deegan made it seem close at the finish, Bennick’s control of the moto was never in doubt as he took the win and control of the overall classification. Deegan’s rebound ride was good enough for second, while Ferry finished third. 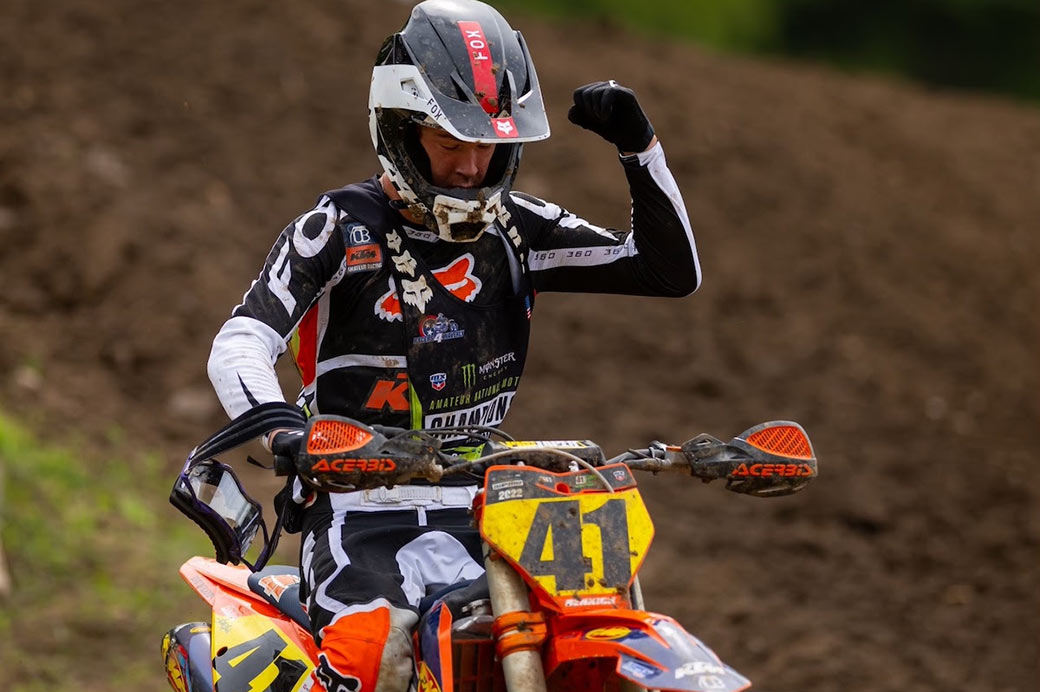 The three-rider trio of NSA Yamaha Factory Amateur Team’s Logan Best, Monster Energy Husqvarna’s Casey Cochran, and BJ Stevens Inc. KTM’s Noah Stevens asserted themselves at the head of the pack in the opening motos of both 125 Jr. (12-17) B/C and Schoolboy 1 (12-17) B/C. Their impressive rides set the stage for two compelling title fights that were sure to take an intriguing turn on Thursday as both classes contested their second motos.

Cochran was the odd man out when it came to winning in the opening motos, but he seized the moment to start 125 Jr. (12-17) B/C Moto 2 and stormed into the early lead after securing the STACYC Holeshot. Stevens gave chase from second in what quickly became a two-rider battle as Best encountered misfortune on the opening lap and started deep in the field in 27th place. Back out front, Cochran and Stevens traded fast laps throughout the first half of the moto, which kept them separated by just over a second. Cochran continued to sustain that pace and his consistency proved to be the difference maker in the closing stages as he went wire-to-wire for his first moto win of the week, several seconds ahead of Stevens. Robbins Water Service KTM’s Klark Robbins was third, while Best had to settle for 13th place.

Brimming with confidence, Cochran carried that momentum into Moto 2 of Schoolboy 1 (12-17) B/C. Not to be outdone, Stevens did as well as was the early leader to start the moto. Best, meanwhile, moved on from his earlier adversity to grab a top-five start. Cochran went on the attack immediately and initiated an exciting battle for the lead with Stevens. The Husqvarna rider made the pass for the top spot with the fastest lap of the moto. As he looked to keep Cochran within reach, Stevens went down and gave up second to Best, but remounted in third. Cochran ran away with the moto and capped off an undefeated Thursday with another moto win, well ahead of Best in second and Stevens in third. 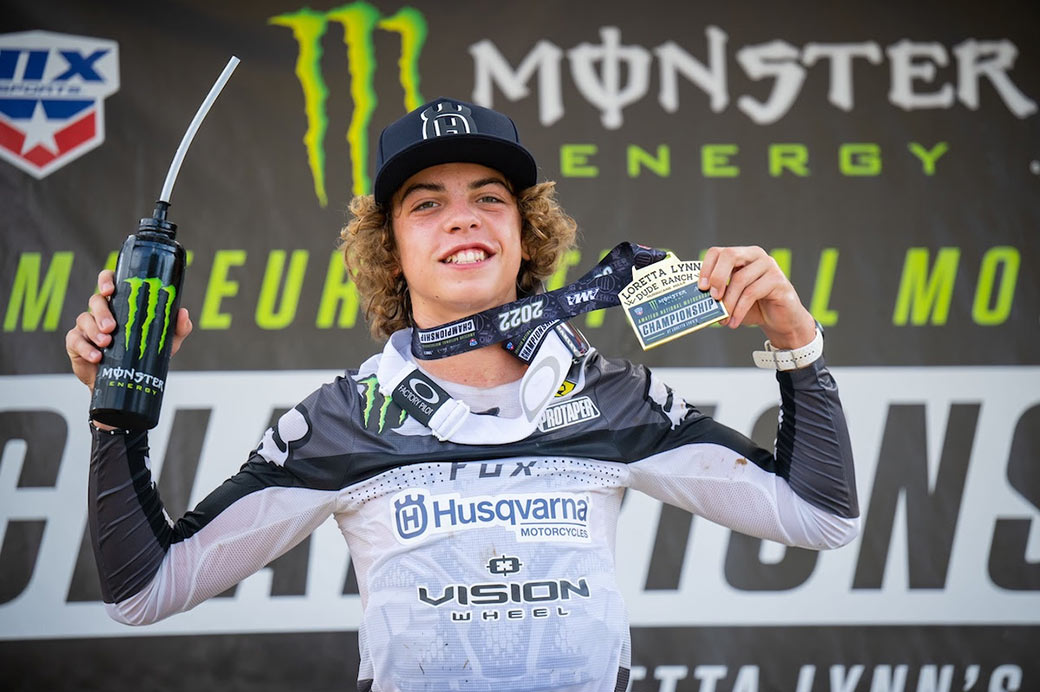 Much like the first moto in this class, the outcome was all but decided off the start as Fappani once again rocketed to the STACYC Holeshot and put some distance between he and GASGAS Factory Amateur Race Team’s Tiger Wood. Meanwhile, Oehlhof started his moto deep inside the top 10 and was forced to battle through the pack just to keep pace with his rival.

Fappani continued to add to his lead and soon sat more than 10 seconds clear of the field. He brought home another convincing wire-to-wire win while Oehlhof once more put forth an impressive ride of his own to make a late pass on Wood to secure a runner-up finish. 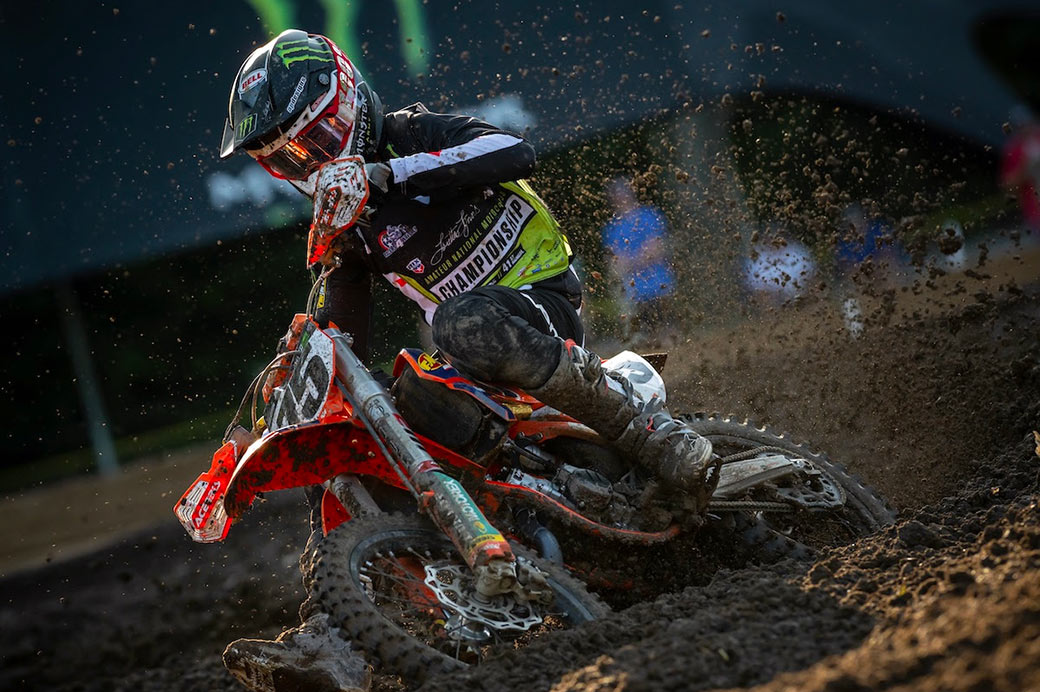 The Mini St. 1 (12-14) rivalry between Monster Energy Kawasaki Team Green’s Caden Dudney and KTM Orange Brigade’s Seth Dennis continued on Thursday to see which rider would have the upper hand entering the third and final moto. Based on their previous battles this week, the deciding factor could come down to which rider earned the better start.

Off the gate, neither Dudney nor Dennis were anywhere near the front. Instead, it was Husqvarna Australia’s Heath Fisher, the third rider in the mix, who assumed the early lead with the STACYC Holeshot ahead of EBR Performance Yamaha’s Chase Andersen. Behind them, Dennis went to work from a fifth place start while Dudney was outside the top 10 in 13th place.

Fisher paced the field for several laps, but Dennis was on the move and making quick work of his fellow competitors. The KTM rider needed just one lap to break into the top three and then got around Andersen for second one lap later. Dennis chipped away at a four-second deficit to Fisher over a few laps and then dropped the hammer with the fastest lap of the moto to seize control of the lead. Fisher encountered misfortune trying to keep pace and eventually dropped out of contention.

Once out front, Dennis sprinted away from the field, which put the pressure on Dudney to find his way to the front. The Kawasaki rider got faster as the moto wore on but faced some adversity on a lap late in the moto that slowed his momentum. He charged hard through the finish and made a late pass to move into podium position.

Dennis rode to a convincing victory ahead of EBR Performance KTM’s Kannon Hargrove in second and Dudney in third.

A single point separates Dennis and Dudney heading to the final moto, with Dennis’ 2-1 finishes giving him the slight edge over Dudney’s 1-3 finishes. 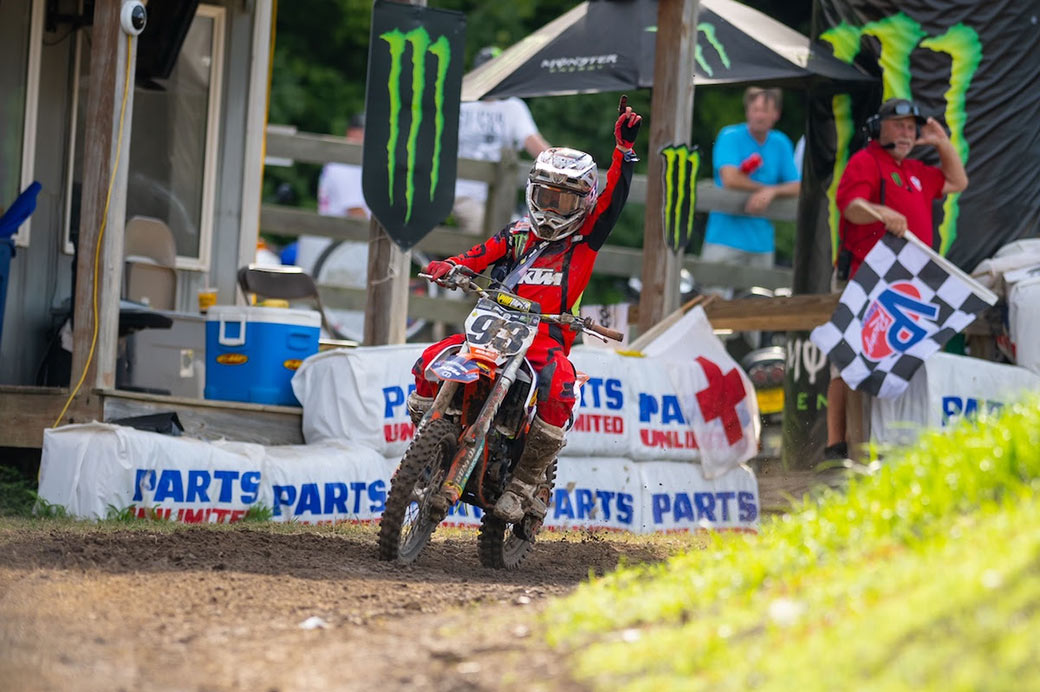 It had been a perfect week for future Hall of Famer Mike Brown entering Thursday’s action. The Tennessee native and Munn Racing KTM rider is contesting two classes in 2022 – Senior (40+) and Masters (50+) – and was three-for-three in moto wins as the second Masters (50+) moto lined up.

One of the biggest keys to Brown’s success this week was his incredible starts and he set the tone once again out the gate in Masters (50+) Moto 2 where he raced to the STACYC Holeshot and sprinted away from the field. Brown had opened a gap of nearly 10 seconds by the completion of the opening lap and wasn’t remotely challenged the rest of the way.

In what may have been his most dominant moto to date this week, Brown took the checkered flag to remain undefeated and move to 4-0 by nearly 50 seconds over Team Babbitt’s Kawasaki’s John Grewe in second, with Triangle Cycles Yamaha’s Kevin Walker in third.

Despite his dominance, Brown still remains just two points ahead of a consistent Grewe in the overall classification and will look to complete the sweep of the motos to wrap up the Masters (50+) crown. 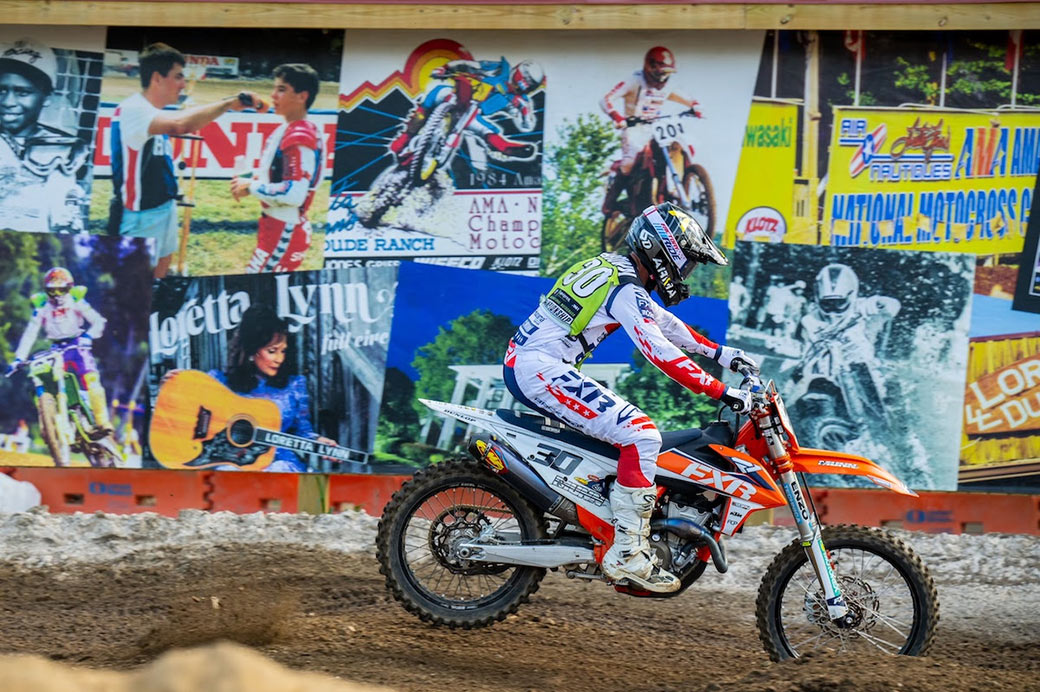 The penultimate day of motos for the 2022 Monster Energy AMA Amateur National Motocross Championship will take place on Friday, August 5. You can watch it live here.