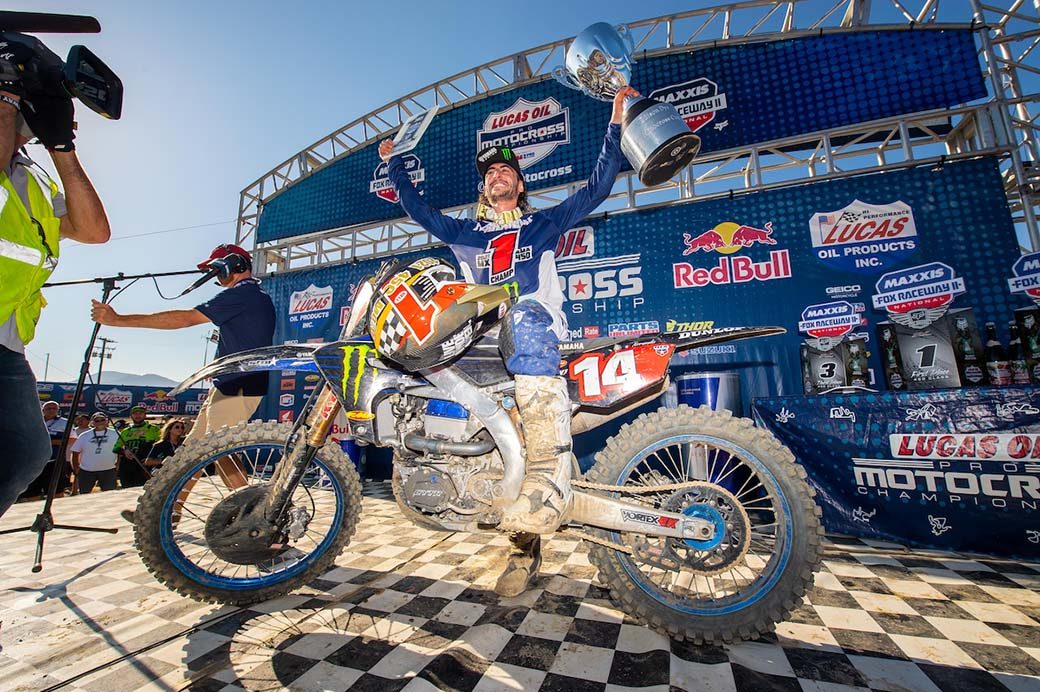 The penultimate round of the 2021 Lucas Oil Pro Motocross Championship, sanctioned by AMA Pro Racing, saw the series return to the sport’s epicentre of Southern California for a second visit to Fox Raceway for the Maxxis Fox Raceway II National, presented by Fox Racing.

Thousands of diehard race fans braved near triple-digit temperatures as they witnessed Monster Energy/Star/Yamaha Racing’s Dylan Ferrandis finish second on the day to clinch the 450 Class title in his first season of premier class competition. He became the 26th different 450 Class titleholder in 50 seasons and is also the first Frenchman in 30 years to win the motocross’ most prestigious championship.

The summer’s most intense weather conditions didn’t deter Monster Energy Kawasaki’s Eli Tomac from using a dominant ride in the second moto to earn back-to-back 450 Class wins, where a tiebreaker allowed him to edge out Ferrandis for the top step of the podium. In the 250 Class, points leader and Team Honda HRC rider Jett Lawrence continued his recent string of dominance with a second straight 1-1 effort to capture his class-leading fourth overall win of the season and extend his points lead with one round remaining.

The opening 450 Class moto of the afternoon started with Team Honda HRC’s Ken Roczen leading the way with the MotoSport.com Holeshot, followed by Red Bull KTM Factory Racing’s Cooper Webb and Ferrandis. The German looked to take advantage of the clear track and sprint away from the field, but both Webb and Ferrandis kept him within reach and even applied pressure for the lead.

Roczen responded and quickly built a three-second advantage over his rivals, which forced Ferrandis to pick up the pace and make the move on Webb for second a little more than 10 minutes into the moto. Ferrandis continued to push and eliminated a three-second deficit to Roczen to challenge for the lead at the halfway point of the moto. Once he closed onto the rear fender of the Honda, Ferrandis made quick work to take over the lead and seize control of the moto.

With first place in hand, Ferrandis continued to sustain the pace and ran the fastest laps of the moto to move out more than five seconds clear of Roczen. Behind them, a long, tense battle for third played out between Webb and Tomac. The pair traded fast laps and momentum surges for several laps, as Webb fended off numerous pass attempts by Tomac. As the moto closed in on its final five minutes, lapped riders gave Tomac the opening he needed to take advantage of Webb being slowed, which provided an unchallenged pass for the position and moved Tomac into third.

With Webb no longer an issue, Tomac was able to pick up his pace and dramatically lowered his lap times, including the fastest lap of the moto, to close in on Roczen and make the pass for second. Roczen’s pace dropped off dramatically and caused him to lose ground to Webb, which led to a last-lap battle for third.

Back out front, Ferrandis carried on to his seventh moto win of the season by 3.9 seconds over Tomac, while Roczen held on for third. Webb finished fourth, followed by Monster Energy/Star/Yamaha Racing’s Christian Craig in fifth.

The final 450 Class moto stormed out the gate with Webb leading the way for the MotoSport.com Holeshot, closely followed by Roczen and Ferrandis. Roczen went on the attack on the opening lap and muscled his way by Webb to take control of the top spot, while Ferrandis followed through into second. The Frenchman kept the momentum rolling and looked to make his way around Roczen, which he did before the completion of the opening lap.

As the leaders settled in up front, Tomac was on the charge forward. After starting fifth, Tomac got into a groove and began to pick off riders at will. He first passed Craig for fourth, then made quick work of Webb to move into third. Not long after that the Kawasaki rider closed in on Roczen and took over second. Tomac faced a small deficit to Ferrandis, but made quick work of erasing that. Just over 10 minutes into the moto the battle for the lead was on. Once they were side by side, Ferrandis didn’t put up a challenge and let Tomac surge ahead. As the change for the lead unfolded, Webb made the pass on Roczen for third. As the moto wore on, Roczen lost more positions and eventually dropped out of the top five. 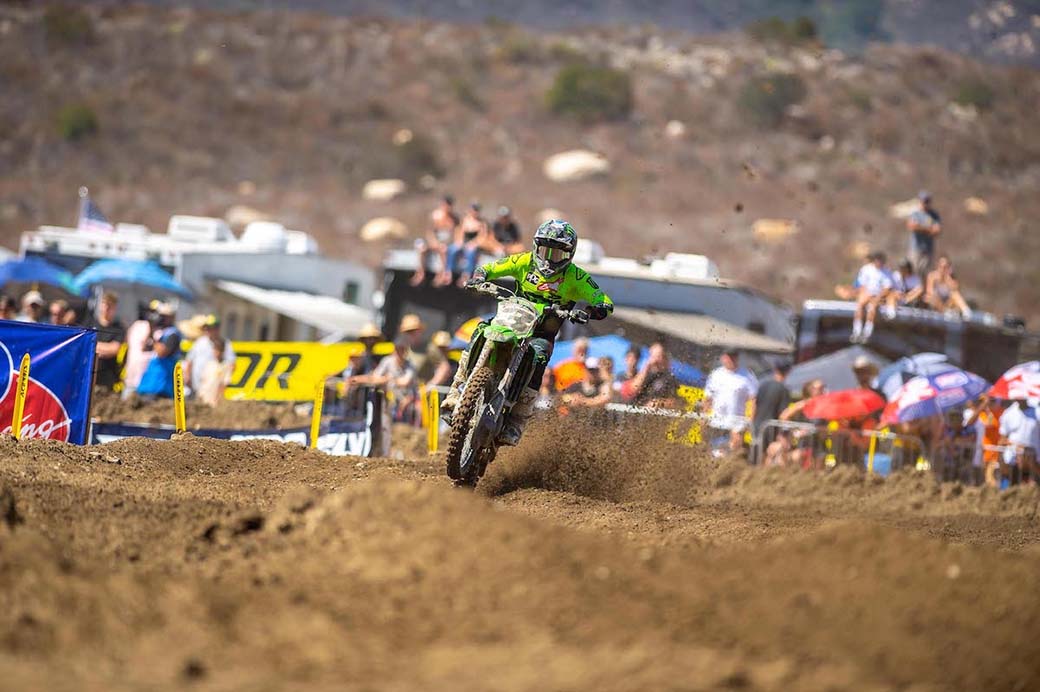 Tomac ran away from the field over the second half of the moto and established a lead that surpassed 30 seconds. He took his fifth moto win of the season by 45.8 seconds over Ferrandis, with Webb nearly a minute behind in third.

After enduring the longest win drought of his career, Tomac has become the hottest rider in the 450 Class with two straight wins, with a tiebreaker putting him atop the overall standings (2-1). His 27th victory in the premier division puts him into a tie with Bob Hannah for third on the all-time wins list.

“I just felt so good in Moto 2,” said Tomac. “I was a little back in the beginning, but was able to really make passes and got the job done early. It’s really fun to be out there when I’m in the zone like that and it’s great to get a couple wins here late in the season.”

Ferrandis’ runner-up effort (1-2) was more than enough to wrap up his first 450 Class title and hoist the Edison Dye Cup, as his 62-point lead over Roczen surpassed the 50-point threshold of available points at a single event. Ferrandis joins Jean-Michel Bayle as the only French riders to win the championship in the premier division. Additionally, he’s the eighth rider in history to earn the title in his first season at the sport’s highest level, while also giving Yamaha its first 450 Class championship since 2007 with Grant Langston.

“I think I’ve run out of emotion,” said Ferrandis. “Today was hard, last weekend was hard. I’ve pushed deep inside to get through it. I dreamed when I was young to be a 250 Class Champion, but I never dreamed of being a 450 Class Champion. It’s not even a dream come true, it is something that’s the best thing I could ever do in my life. Wow, it’s unreal.”

Webb rounded out the overall podium with his second straight third-place finish (4-3).

While Ferrandis has wrapped up the championship one round early, the battle for second in the final standings is closer than ever as Roczen and Tomac are separated by just nine points. 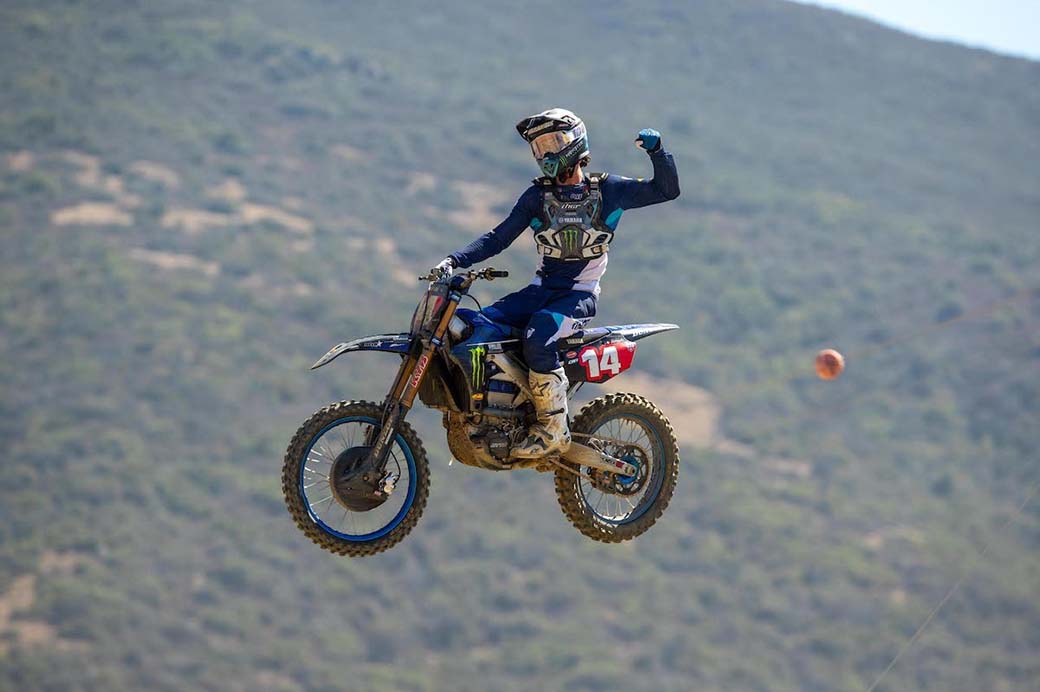 With his first opportunity to pace the field this summer Mosiman quickly built a lead over Vohland, Lawrence, and the rest of the field. Lawrence bided his time in the early laps and patiently waited for his opportunity to make a pass on Vohland, which he did successfully several minutes into the moto. As Lawrence made the move, Cooper remained mired in seventh.

As the moto approached its halfway point Lawrence had chipped away at Mosiman’s lead and closed to within striking distance of the lead. Mosiman then lost traction of his front tire and went down, which handed the lead to Lawrence, second to Rockstar Energy Husqvarna Factory Racing’s RJ Hampshire, and third to Vohland. As this unfolded, Cooper dropped to eighth as Team Honda HRC’s Hunter Lawrence made the pass for seventh. Mosiman remounted in fifth, but went back to work and clawed his way back up to third. He didn’t stop there and kept his head down to close in on Hampshire and make the pass for second with relative ease.

Out front, Jett Lawrence was on cruise control and easily rode to his seventh moto win of the season. The Australian crossed the line 9.2 seconds ahead of Mosiman, followed by Hampshire in third and Monster Energy/Pro Circuit/Kawasaki’s Jo Shimoda in fourth. Cooper dug deep and made a late charge to battle his way into the top five.

Lawrence picked up where he left off to begin Moto 2, as he emerged with the MotoSport.com Holeshot ahead of Mosiman and Cooper. The clear track proved to be advantageous to the Australian, as he sprinted on the opening lap and established a multi-second lead over the field. Behind him, Mosiman and Cooper began a spirited battle for second.

Cooper appeared to be faster than Mosiman, but found difficulty in finding a way around, which allowed Mosiman to inch away. Soon, Mosiman asserted his control of the position as the top three settled into their running order. As the moto approached its final 10 minutes, Cooper was able to pick up the pace, which allowed him to catch Mosiman and make the pass for second, from which Cooper quickly pulled away. The battle for the podium didn’t end there, as Shimoda came on strong in the waning moments of the moto. The Japanese rider caught Mosiman, applied pressure, and made an impressive pass to take over third.

Out front, Lawrence was in a class of his own yet again and enjoyed a dominant wire-to-wire victory to wrap up the moto sweep. He took the checkered flag 14.2 seconds ahead of Cooper, with Shimoda a distant third.

The triumphant effort maintained the young Aussie’s undefeated record at Fox Raceway, with a win streak in Southern California that extended to three races. After breaking through for his first career professional victory at the track last October, Lawrence followed it up with a season-opening win this summer and is now the winningest rider in Fox Raceway history with third consecutive victory.

“I think everything just fell into place (today),” said Lawrence. “It was just a hard day, it’s really hot. It’s been one of the toughest days we’ve had in a while. It feels great to get three in a row here (at Fox Raceway).”

Mosiman equaled a career-best result with his second ever runner-up effort (2-4), while Cooper’s strong effort in the second moto helped maintain his overall podium streak in third (5-2).

Back-to-back moto sweeps have allowed Lawrence to build up a 23-point lead over Cooper with one round and two motos remaining. They’ll be the only two riders to battle it out for the Gary Jones Cup next weekend, as Hunter Lawrence, who sits third in the standings, has been mathematically eliminated.