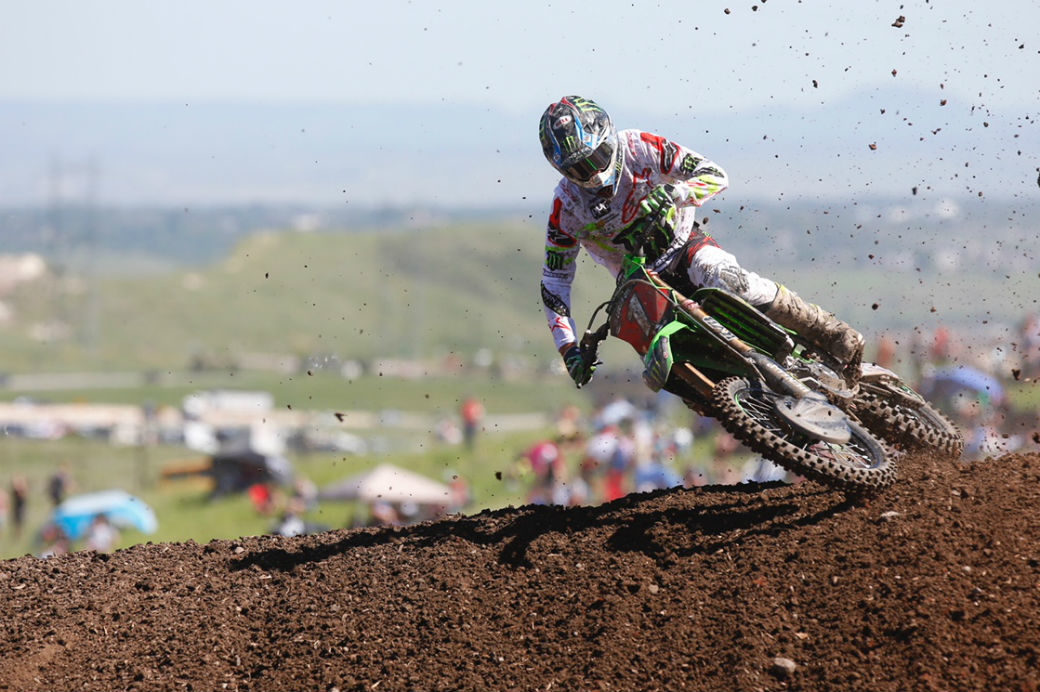 Monster Energy Kawasaki rider Eli Tomac carried momentum into Round 3 of the 2018 AMA Pro Motocross Championship in the mountainous scenery of Lakewood, Colorado. Entering the Thunder Valley National, Tomac had a personal goal of capturing the win in his home state, which he successfully achieved and now carries a six-moto winning streak.

After qualifying with the fastest lap times in both practice sessions, Tomac and his KX450F lined up for Moto 1 feeling confident. Unlike previous rounds this season, Tomac did not have to work hard to get to the front as he shot out of the gate in third and quickly moved into second place. With a little over 10 minutes completed, a red flag was drawn due to a crash, forcing the riders to line up for a restart with 19:36 set back on the race clock.

Fortunately, Tomac got off to another great start in fourth and once again proceeded to make his way to the front where he found himself battling for the lead for several laps. Eventually making his move with 10 minutes remaining the No.1 took charge and set the fastest lap of the race and went on to take the win with a margin of victory of nearly five seconds.

In 450MX Moto 2, Tomac grabbed another top three position right out of the gate. Just as he made his move forsecond, the leader went down right in front of him, forcing him to hit the brakes and fall back to third. Recovering quickly, Tomac made his way back to second with incredible speed and was gaining on the leader.

As he continued to closely follow behind his competition, Tomac remained patient and waited for the right time to make a pass stick. Once out front, Tomac seemed to catch a second wind as he rode with pure aggression to pull away from the competition and take the checkered flag this time by more than 11 seconds. The 1-1 moto scores gave Tomac his first 450 overall victory in front of his home state crowd.

The undisputable red plate holder and the rest of the Monster Energy team will take a well deserved week off as Round 4 of the 2018 AMA Pro Motocross Championship will pick up on June 16th in Mt. Morris, Pennsylvania for the High Point National.

“After a couple of years with bad results at Thunder Valley, it feels really good to bring home a win,” said Tomac. “My team set me up with an awesome bike that allowed me to just get out there and attack the track. We’re rolling and looking forward to the next one.”