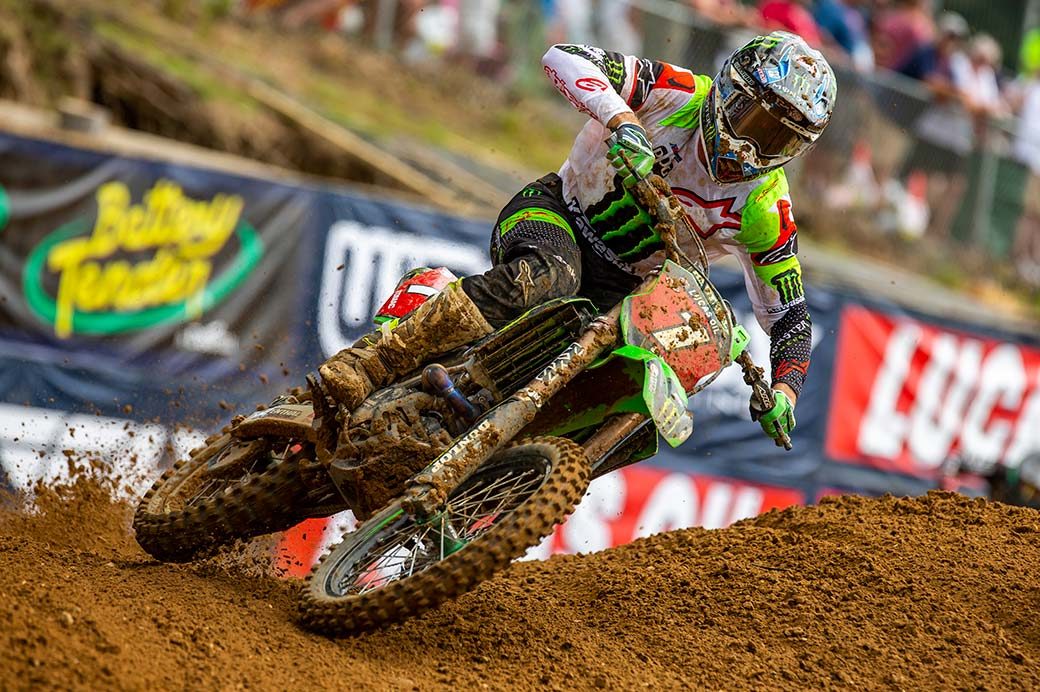 The power of perseverance was the theme of the day for Monster Energy Kawasaki rider Eli Tomac, as he bulldozed his way through the competition to claim his eighth overall victory of the season at the iconic Budds Creek National in Mechanicsville, Maryland.

Monster Energy/Pro Circuit/Kawasaki rider Austin Forkner reached the podium in the first 250 moto and ended up fifth overall after finishing 3-7 for the day.

Tomac started the day by showing his competition that he is willing to do anything to defend this championship by setting the fastest lap time in qualifying with a 2:04.6 to open Round 11 of the 2018 AMA Pro Motocross Championship. After a top 10 start in Moto 1, Tomac charged the rolling hills aboard his KX450F making his way up to seventh place by the end of the first lap.

From there, Tomac would spend the next 30 minutes slicing and dicing his way through the field and was able to move into third place on Lap 12, which is where he would finish the moto.

With a championship at stake and the temperatures rising, the stage was set for an incredible race in Moto 2. Tomac would put in a heroic ride in the last moto of the day after finding himself in sixth place by the end of lap one. Tomac quickly started picking off his competitors one-by-one. After passing his way into third place on lap seven, Tomac set his sights on the two front-runners and charged his way to the front by averaging lap times, almost two full seconds faster than his competitors.

By Lap 10, Tomac had moved into second place and wasn’t going to settle for anything less than the top spot of the podium and by the end of lap 11 he had achieved just that. Tomac rounded out the day with a 3-1 score, which was enough to take first place overall and extend his championship points lead to 20 with only one round remaining.

“Winning the championship is the ultimate goal, and today we were able to add some more points to put us in the best possible position going into the final round next weekend,” said Tomac. “In Moto 1 I struggled a little bit making my way through traffic, but in Moto 2 I was just feeling it and after I got around a couple guys I knew I could catch the leader and win. I am pumped I was able to do that!”