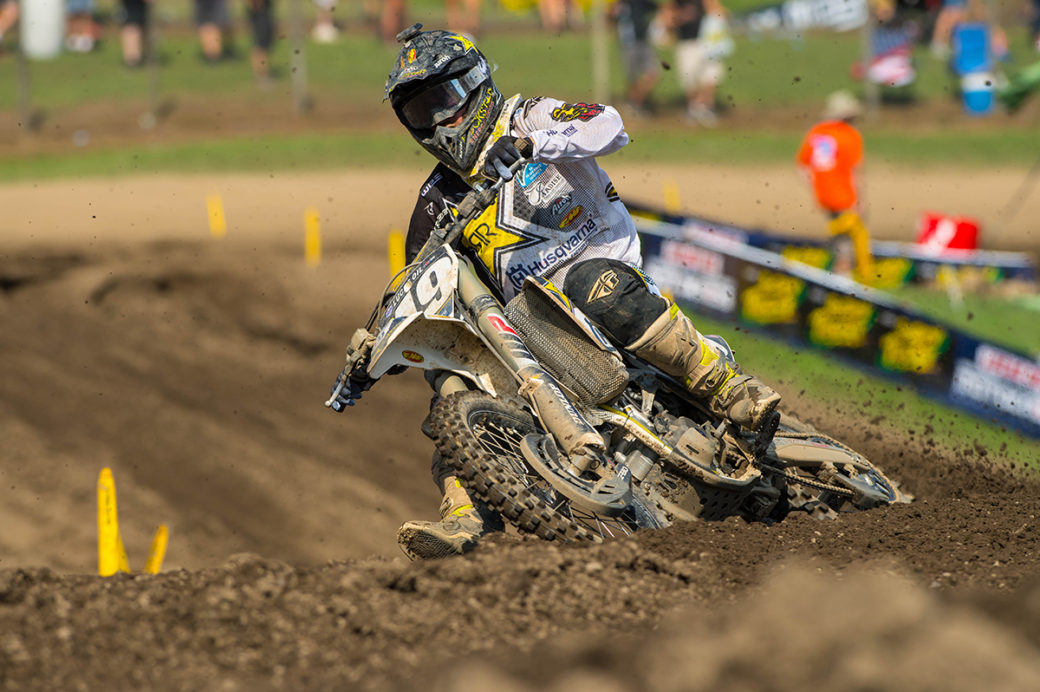 After a two-week hiatus, the Rockstar Energy Husqvarna Factory Racing team rolled into the Unadilla National, the 10th round of the AMA Pro Motocross Championship, ready to fight.

Although 450 riders Jason Anderson and Christophe Pourcel sat this round out due to previous injuries, 250 riders Martin Davalos and Zach Osborne kept their game faces on and stayed focused as the end of the  season quickly approaches.

Martin Davalos is nursing an injury sustained at a crash at the last race at the Washougal National, but came to Unadilla ready to battle.

He started mid-pack in the first 250 moto and moved into 10th by the end of the first lap. A crash put him back in the 20th place position by lap three, and he was forced to fight back through the pack. He finished the race in 11th. He started mid-pack again in the second moto and pushed through the pain to finish eighth. The 11-8 finish gave him 8th overall on the day.

“I really haven’t ridden that much in the past two weeks due to my shoulder injury,” said Davalos. “It’s been a challenge. I’m just glad I was safe after Washougal and am happy I was able to put in two solid motos.

The strength in my shoulder just isn’t where it should be. I was on the ground quite a bit but I was able to fight back and give it my best. My shoulder is ok, just really sore. I look forward to more therapy. It’s just going to be a matter of time to get everything back to 100%. I need to get my strength back in order to hold on to the bike. The track here was brutal – really rutted – which made it more challenging for me. I’m really happy that I walked out of here safe.”

Zach Osborne got a decent start in the first 250 moto and was running comfortably in sixth until the sixth lap when an incident forced a DNF. He lined up for the second moto with plans of redemption, but was unable to finish the race due to another incident that occured shortly after the start. He will regroup and return for next week’s race at Budds Creek.

“I had good speed in the first moto,” said Osborne, “but today was a huge struggle. It’s a major disappointment to have two DNF’s. I’m looking forward to Budds Creek next week.”