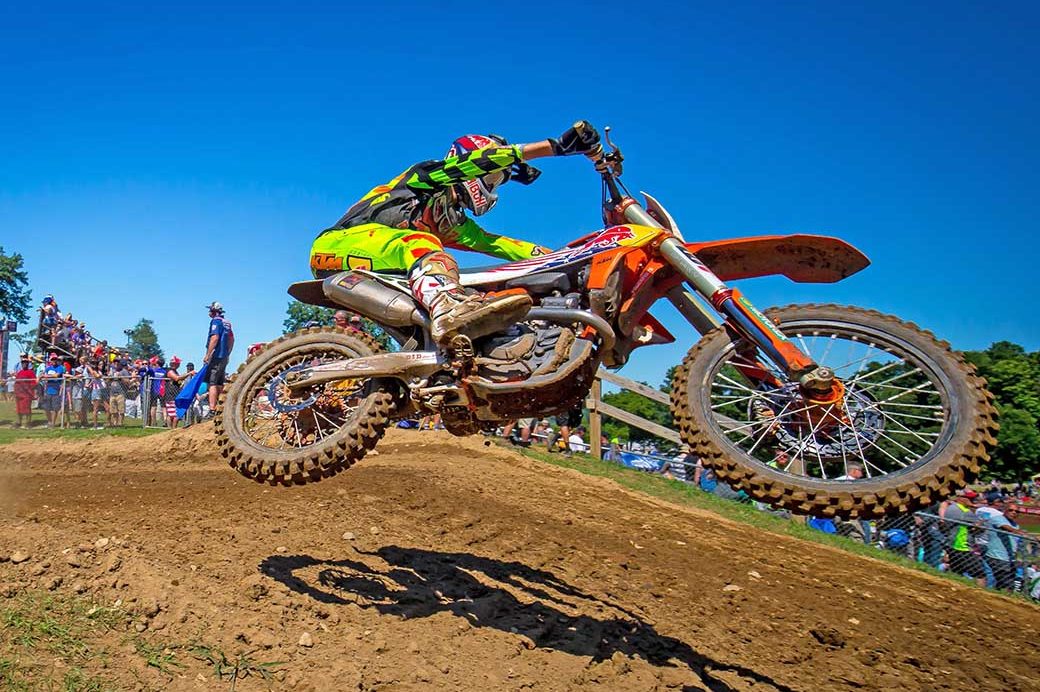 Marvin Musquin earned his second consecutive victory and locked down the 450 series points lead at the RedBud National, round 7 of the AMA Pro Motocross Championship, held in Buchanan, Mich.

The Frenchman overcame a crash in the first lap of the first 450 moto to charge from the back of the pack to second, then followed it up with an exciting second moto win to earn the overall and the red plate.

Musquin posted the third-fastest qualifying time of the day, and had the opportunity to take control of the 450 points lead and the coveted red plate.

He lined up for the first 450 moto looking for a holeshot but got caught up in a first-turn pileup. He remounted in the back of the pack and charged through the traffic.

He pushed his way to 12th by the third lap then closed a ton of ground to make it up to fifth around the halfway mark. He blew past Benny Bloss for third with three laps to go then finished his impressive moto with one more pass for second.

He was fourth at the start of the second moto and immediately went to battle as he overtook the lead before the end of the first lap. He had a strong ride and held his ground as he was being challenged for position the remainder of the race.

Never letting up, he fully redeemed himself from his first-moto crash and put on an amazing ride to charge to his second consecutive overall victory and take over the series points lead. He will run the red plate at the next race.

Musquin: “I can’t believe I came back to second place in the first moto. It was a crazy race, so having a shot of winning the overall after that was great. I was looking forward to the second moto. I got a great start and was able to get into the lead.

My goal was to stay consistent and mistake-free. I was able to stay on two wheels and keep Kenny and Barcia behind me. It’s crazy to be leading the championship now.

Anything can happen. It’s only another race, and there’s a lot to go. The fans were unbelievable here. I really enjoyed it. Having the second win in a row is amazing.”