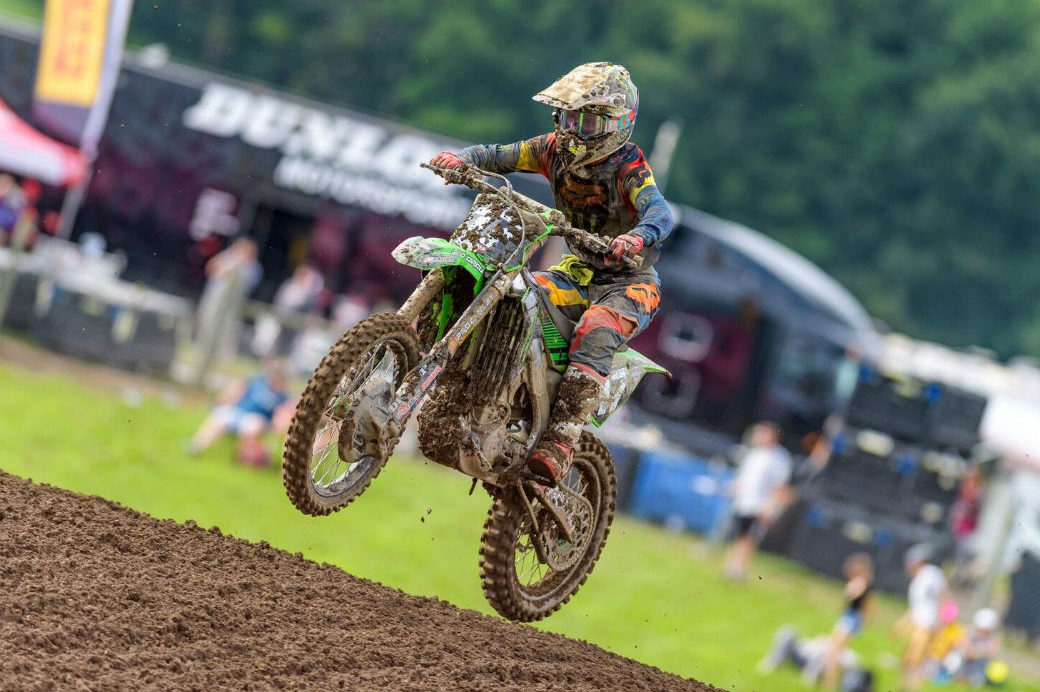 Monster Energy Pro Circuit Kawasaki’s Joey Savatgy and Austin Forkner faced incredibly slippery and muddy conditions at Round 10 of the Pro Motocross Championship at Unadilla MX after the skies opened prior to Moto one.

The duo overcame their share of difficulties, with Savatgy still managing a moto podium in Moto two. Savatgy’s 8-3 score pushed him just off the podium in fourth, while a tough first moto for Forkner placed him 14th overall with a 23-9.

With the day starting out dry, the riders were setting a fast pace around the Unadilla circuit. That included Savatgy who claimed the top qualifying spot in the morning. The skies soon opened up before the first moto, changing the track considerably and making for difficult conditions. When the gate dropped on Moto one, Savatgy was at the front and trying to make a charge when he went down. He remounted quickly and came around the first lap in 14th. Despite not being able to push very hard to avoid going down, he still managed to get back up to eighth.

In Moto two, Savatgy got another good start and was in fifth after lap one. He would battle for the fourth spot and by the end of the moto would make it up to finish on the podium in third. His 8-3 score was good enough for fourth.

“It felt like my day during practice and I wasn’t even that worried about the mud when we lined up, but it got me on the first lap,” said Savatgy. “I hurried to get back on the track before a lot of the field came by and I think that helped me because passing was difficult. So we did what we could and I rode much better in the second moto. I know we were on track for the win before the rain, which is a bummer, but it’s good to know the speed is there and we can bring that to Budds Creek.”