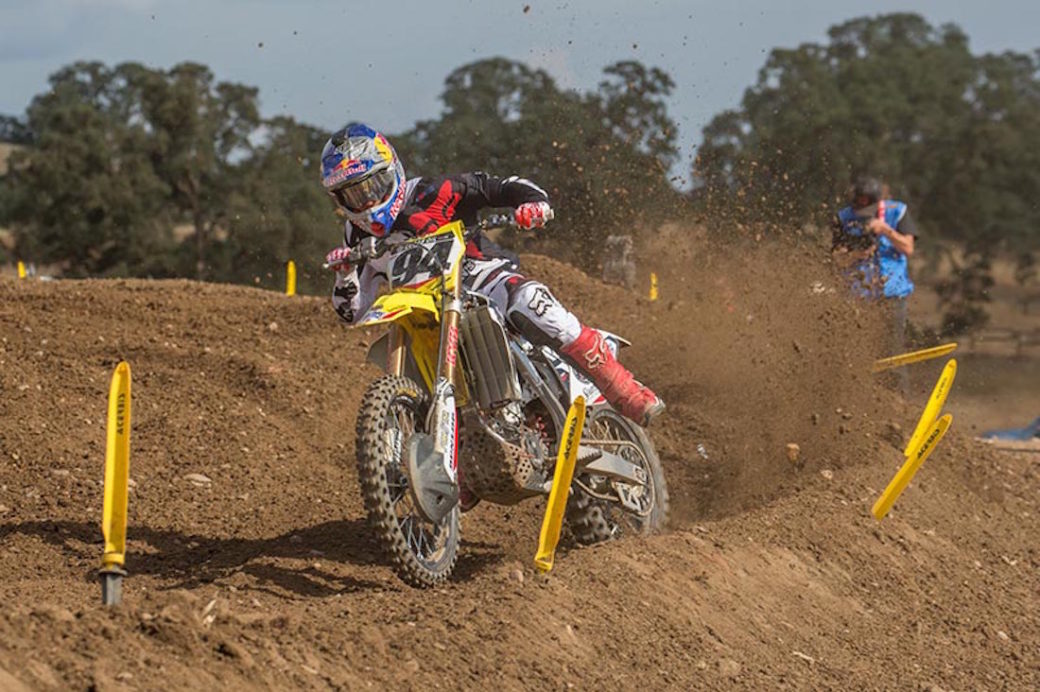 One year after his Lucas Oil Pro Motocross season was derailed by a back injury and first-year growing pains with a new team, Ken Roczen is ready to reclaim the 450 Class championship. He got the season underway with a 1-1 sweep at the GoPro Hangtown Motocross Classic.

Roczen led every single lap of racing at Hangtown for a pair of wire-to-wire moto wins.
In Moto 1, Cole Seely narrowly edged out Honda HRC teammate Trey Canard for the holeshot, but Roczen soon moved past both of them by the end of the first lap to take over the lead. From there, Roczen began checking out from the field.
After Seely ceded the lead to Roczen, Seely dropped another spot to Canard. Less than three minutes into the race though, Canard went down and would have to battle from the backend of the top ten.
On Lap 2, Ryan Dungey took over second place and tried to set his sights on Roczen. The two of them pulled away from the rest of the field, but Dungey was unable to reel in his championship rival.
Roczen took the Moto 1 victory, finishing six seconds ahead of Dungey and 35 seconds ahead of the rest of the field.
Roczen and Dungey are considered two of the leading title contenders for the 2016 season. The third candidate, Eli Tomac, salvaged a disappointing start to end up with a fourth-place finish.
Expectations were high for Tomac, who dominated both motos at Hangtown one year ago and was the top qualifier in practice this morning. But starts have always been an area of concern for Tomac, and by the end of Lap 1, he found himself back in 12th place. The rest of the moto featured Tomac working his way up through the field and picking off riders on his way up to third place. The race’s biggest surprise came when Blake Baggett passed Seely to move into fourth and then blew past Tomac to take away third.
Like Tomac, Baggett made a charge of his own through the field after starting in ninth after the first lap.
“I was doing whatever I could,” Baggett said after the race. “I like this place, Hangtown’s always been good to me. I was just trying to push it toward the front. The last three laps, I found some new lines and was making it happen.”
One rider who went the opposite direction from Tomac and Baggett was Justin Bogle. The contract-year rider is in his first full season on a 450 and started the race strong, reaching as high as fourth place on Lap 2. But similar to last year, Bogle soon faded through the pack and fell back to 12th by the end of the race.
It was more of the same from Roczen in the second moto. Although Dungey emerged with the holeshot, a mistake on the opening lap allowed Roczen to overtake him for the lead.
From there, Dungey was unable to catch back up to Roczen. Roczen finished nearly 15 seconds ahead of Dungey and almost 30 seconds ahead of the rest of the field.
The 1-1 sweep gave Roczen the overall victory, while 2-2 finishes put Dungey second overall.
Justin Barcia got a good start in Moto 2 and was running in the top three for the first five laps of the race before ceding the position to Rockstar Energy Husqvarna’s Jason Anderson.
Meanwhile, Tomac once again found himself working his way toward the front of the field from a less-than-ideal starting position. He passed Phil Nicoletti, Josh Grant and Barcia within the first seven laps to move up from seventh to fourth, but Tomac could not reel in Anderson for a podium position. In total for the day, Tomac’s 4-4 moto finishes did land him third overall, but he already faces a 14-point deficit behind Roczen in the 450MX standings.
Anderson (6-3) finished fourth overall, and Trey Canard (7-5) completed the top five. Barcia (10-6) ended up seventh overall, and while he has to be disappointed given how strong he was outdoors last summer, it’s certainly an improvement on a supercross season he likely wants to forget.
It had the look of a promising day for Baggett after his podium finish in Moto 1, but the Yoshimura Suzuki rider went down on Lap 13 while running in sixth place. He ended up 19th in the moto, and dropped outside of the top ten overall for the day.
Red Bull KTM’s Marvin Musquin (9-7) rode to a pair of top ten moto finishes in his 450 Class debut and finished eighth overall. He spent some time inside the top five in Moto 1 and could certainly become a factor as the season progresses.
James Stewart’s day ended early when he crashed out of the first moto and reportedly sustained an injury. The former series champion did not line up for Moto 2.
Roczen will head to Glen Helen with the red plate, something he last held one year ago when he entered Hangtown as the defending champion of the series. Dungey and Tomac are sure to make bike changes between now and then though, so it’s anyone’s guess how the results will shake out there.
450 Results
1. Ken Roczen (1-1)
2. Ryan Dungey (2-2)
3. Eli Tomac (4-4)
4. Jason Anderson (6-3)
5. Trey Canard (7-5)
6. Cole Seely (5-10)
7. Justin Barcia (10-6)
8. Marvin Musquin (9-7)
9. Josh Grant (8-8)
10. Phil Nicoletti (11-9)
11. Blake Baggett (3-19)
12. Justin Bogle (12-11)
13. Andrew Short (15-12)
14. Christophe Pourcel (17-15)
15. Broc Tickle (14-18)
16. Weston Peick (39-13)
17. Fredrik Noren (13-37)
18. Benny Bloss (21-14)
19. Cody Cooper (19-16)
20. Justin Brayton (18-17)
Notables
40. James Stewart (40-DNS)
450 Standings
1. Ken Roczen, 50
2. Ryan Dungey, 44
3. Eli Tomac, 36
4. Jason Anderson, 35
5. Trey Canard, 30
6. Cole Seely, 27
7. Justin Barcia, 26
8. Marvin Musquin, 26
9. Josh Grant, 26
10. Blake Baggett, 22
Hangtown Ken Roczen