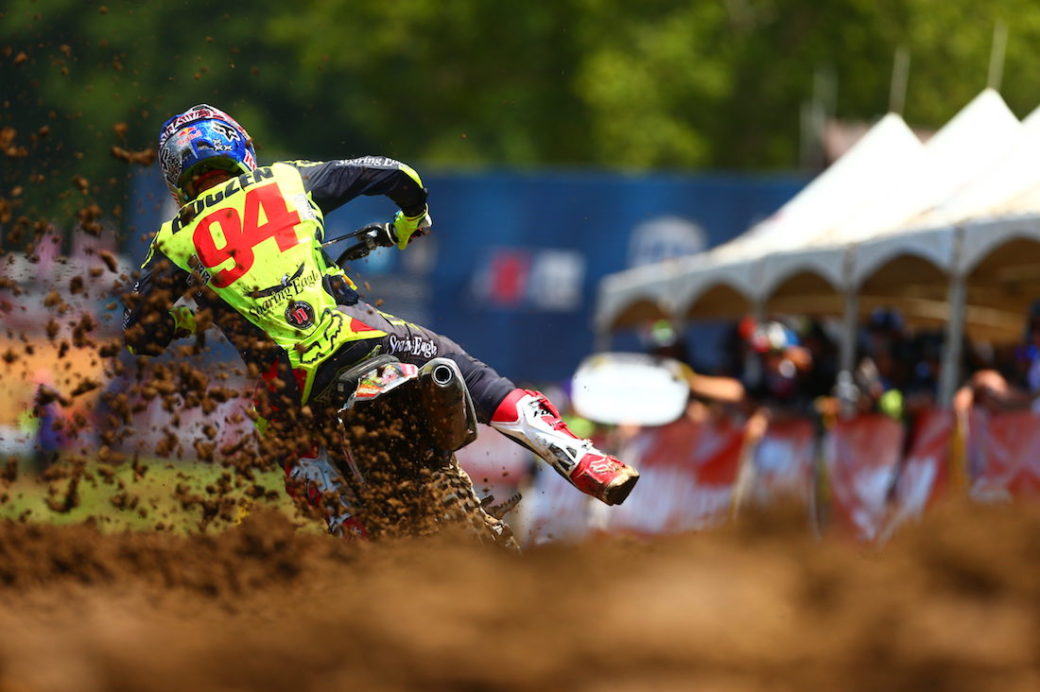 Hot, muggy but most of all it was muddy. Muddy Creek Raceway truly lived up to its name early in the day at the Red Bull Tennessee National for Round 5 of the 2016 Lucas Oil Pro Motocross Championship.

With the drop of the gate it was Cole Seely stealing the holeshot, but almost as quickly as the first turn to follow Phil Nicoletti took the lead early. Just behind them was Christophe Pourcel, the fastest rider in qualifying, putting on fight for second in the first lap with Seely and briefly taking the position while Seely dropped to fourth behind Justin Barcia.

However, still within the first lap Seely would find his groove again and make moves back to first from fourth.

Around ten minutes into the race Nicoletti slipped behind Pourcel and found himself alongside his teammate Barcia. The two teammates would find themselves tangled up and spilling over resulting in them relinquishing their third and fourth place positions, which allowed the aggressive passer Eli Tomac into the ranks.

Tomac took advantage of his opportunity to do what everyone has been waiting to see all season and do battle with Roczen. This began what quickly became the best battle of the moto for second place while Seely maintained the lead.

For the next nine minutes it was all eyes on the front three runners as Seely did everything in his power to hold the longest lead he had all season, but the real battle seemed to be for second. Roczen and the hungry Tomac (who has yet to earn a moto win this series) battled for second over the course of a couple of laps before Roczen decided to take the battle to the front.

Within a single minute Roczen passed seely leaving the door open for tomcat who took the opportunity to move on Seely, but second place wouldn’t be given up without a fight as Seely took it back before ultimately giving it up for a second time.

With five minutes and two laps left to go in moto 1 there was official word that Barcia was off the track and out the race.

As the final minutes and final two laps came to a close the first moto would show another win for Roczen, and ultimately a greater gap in points between him and the second place finisher and overall points rider Tomac. Seely would finish the moto in third, respectively, and with a request to the announcers to stop calling him a supercross specialist.

Following a longer than usual break between motos the riders lined up completely refreshed for their second moto.

Broc Tickle, who was the third fastest rider in qualifying, took the holeshot and was followed closely by Justin Brayton and Marvin Musquin. Just behind those three were the top three from the first moto in order of Cole Seely, Ken Roczen and then Eli Tomac.

Very early in the opening lap Tomac made an early pass on Roczen, but Roczen quickly answered with a pass on both Tomac and then on Seely. Next up Roczen took second place away from Brayton with an outside pass while still inside the first lap.

Still determined, Tomac showed he was still focused and managed to pass Brayton and Seely at once. However, Roczen was staying busy as well with a pass on his teammate Tickle.

With the first five minutes of the second moto gone it was Roczen in the front followed closely by teammate tickle with a determined Tomac in hot pursuit. Within the next five minutes Tomac had made it happen and passed Tickle to put in work on Roczen once again.

Looking back at the battle for sixth, Musquin settled down after his quick start and was working to hold off Weston Peick and the return of Blake Baggette to this 2016 series. Baggett was forced to take a few rounds off following an injury to his collar bone and shoulder, but clearly he had not been sleeping in his time off as seen by his fighting for the front on the track.

Musquin, however, was the one to watch. As Brayton faded from the front, Musquin came in hot and not only found fifth but continued his momentum to find fourth out from around Seely. Still, Baggett wasn’t ready to be forgotten and quickly found his way around Peick for sixth leaving Justin Barcia next in line to battle for seventh. And that is just what he did over the next minute as he overtook Peick and pushed on toward Baggett. By this time Brayton had dropped back behind the entire bunch.

As the race came down to the final three laps it was all eyes on Tomac trying to overtake Roczen, and it was close for every single corner. Roczen made a mistake coming over a double but quickly recovered. Then Tomac opened up and tried multiple alternate lines nearly passing while also nearly coming off his bike, but Roczen held him off into the final lap.

With an insane battle around every turn, Roczen managed to hold off Tomac and take the win and Tomac taking second.