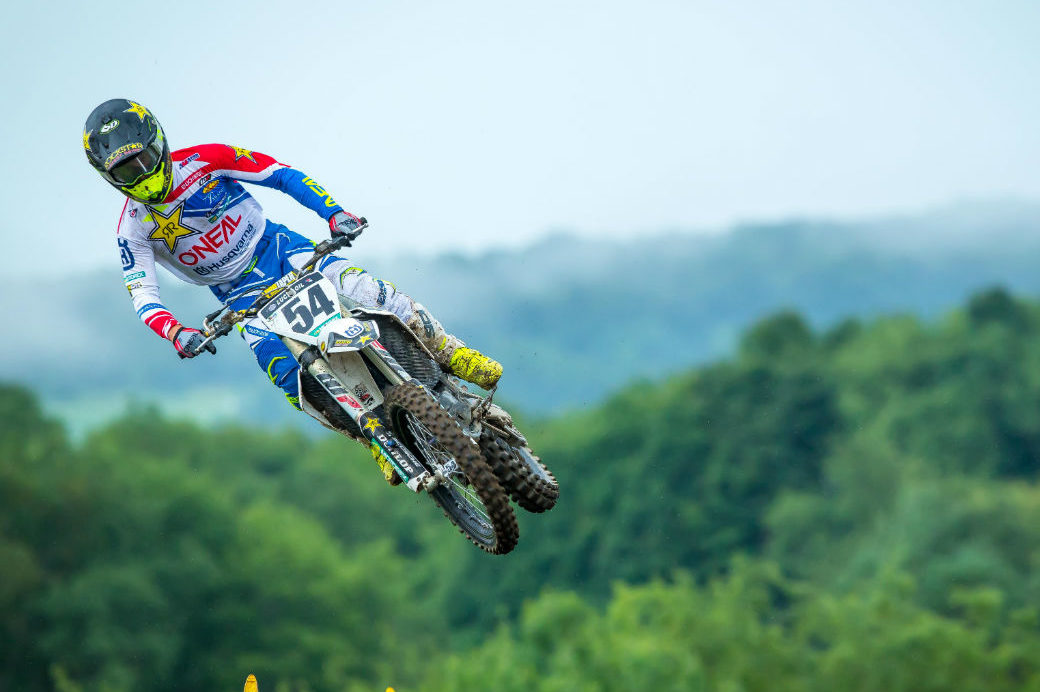 The Rockstar Energy Husqvarna Factory Racing Team battled extremely difficult track conditions, mud, and ruts at the Unadilla National on Saturday, the 10th round of the AMA Motocross Championship. Despite the conditions, the team walked away with two overall podium finishes with Phil Nicoletti earning third in the 450 class, and Mitchell Harrison finishing a solid third in the 250 class.

Phil Nicoletti got a great start in the first 450 moto and was holding it down in the top-five early in the race before charging into the second-place spot as he inched closer to the leader. Known for his skills in the mud, and racing at his home track, he continued to chase race leader Marvin Musquin and waited for his opportunity to strike.

He went back to third but was putting on a strong ride and continued to push through the difficult track conditions. He held on to finish third. He got a great start in the second moto and quickly launched himself into the lead. He was shuffled back but was still putting in a solid ride in the top-three but then tipped over near the end of the race. He still put in a great ride to finish fifth. The 3-5 finish gave him an impressive third overall on the day.

“Today was great,” said Nicoletti. “I felt pretty good in practice before the rain came. I had an OK start in the first moto and made some really quick passes then just sent it. I stalked Marvin for a while, but then Eli started coming. I had to do one lap without goggles, which hurt me. I ended up third, which I was happy with. The team hustled to get the bike dialled for the second moto. I got a good start and ran third for a while. I tipped over in the last lap and finished fifth. I’ll take it for the home race. It was a pretty unbelievable experience for me!”

Mitchell Harrison was third at the start of the first 250 moto and overtook the second-place position before the end of the second lap, putting Rockstar Energy Husqvarna Factory Racing riders 1-2 early in the race. He went back to third and remained there the majority of the race before finishing fourth. He got another great top-five start in the second moto and was putting in a solid ride. He went to battle on the deteriorating track and pushed his way into the second-place spot in the second lap.

He was in the middle of a freight train of riders fighting for position. He made an inside pass for the lead at the 18-minute mark and worked on pulling a gap. He fought for his position with four minutes to go as the second and third place riders came in for the kill, but he held his ground and didn’t let up. He held on to the position before going down in a corner. The fall put him back to fourth. He held strong to finish fourth. The 4-4 finish gave him an impressive third overall on the day.

“Today was filled with rain and mud,” said Harrison. “I got a good start in the first moto and was running right behind Mosiman for awhile. We both went down, unfortunately, and I ended up fourth. I had the lead for a while in the second moto, but I got together with a lapper. I knew I had to be smart to secure the overall podium, and that’s what I did. It was a great day.”

Michael Mosiman pulled the holeshot in the first 250 moto and immediately went to battle with the difficult conditions of the track. He took solid command of the moto and started pulling over a five-second gap early in the race. He was riding strong but then got cross-rutted in the mud and went down hard. He remounted in the fifth-place spot and went back to work.

He had a solid ride and eventually finished sixth. He crashed off the start of the second moto and remounted in the very back of the pack. He worked his way up to 20th by the third lap, then put in a hard charge to make it to 13th with four minutes remaining in the moto. He held strong to finish 13th. The 6-13 finish gave him 10th overall on the day.

“It was a good but chaotic one today, to say the least,” said Mosiman. “I pulled the holeshot in the first moto, led a few laps, then went down after cross rutting. The bike was so heavy after that, then I crashed twice after going down the first time. I ended up sixth. I started in the same gate the next moto, and was really close to the holeshot but I was clipped and went into the hay bales. I got back to 13th, which is good. It was a fun race, and I enjoyed my experience.”

Jordan Bailey was in the back of the pack at the start of the first 250 moto. He was 21st around the halfway mark and made one more pass to finish 20th. He was mid-pack at the start of the second moto and worked his way to just outside the top-10 by the third lap. He stayed consistent the majority of the moto but was shuffled back towards the end of the race and finished 17th. The 20-17 finish gave him 21st overall.

“Unadilla was a mud fest,” said Bailey. “I went down a few times, but I’m looking forward to next week.”