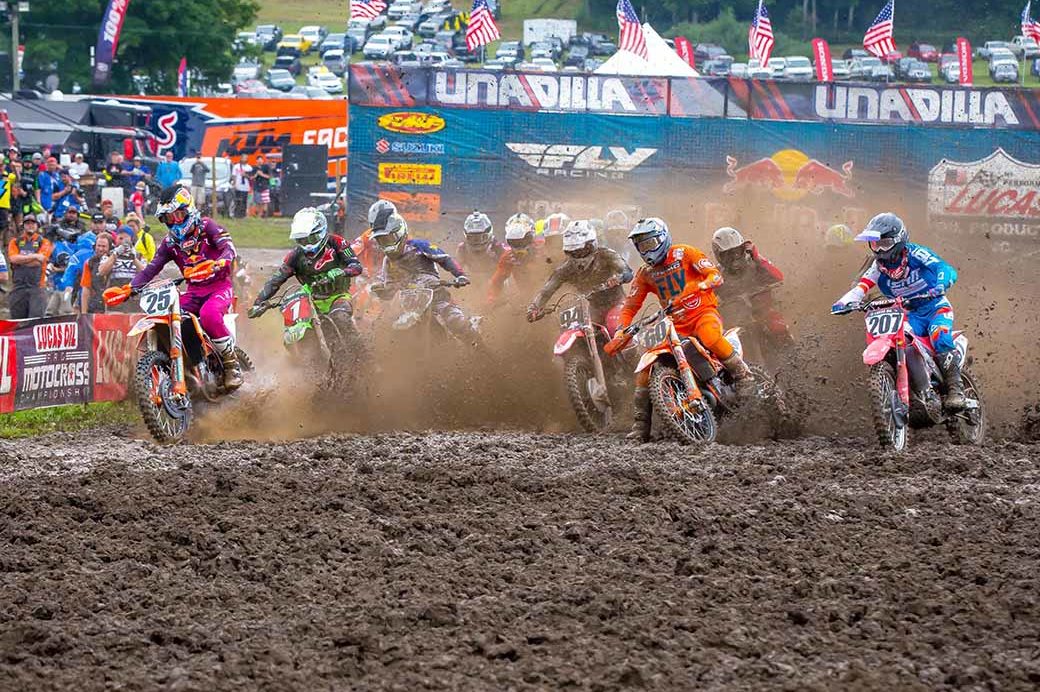 The Lucas Oil Pro Motocross Championship, sanctioned by AMA Pro Racing, made its return to racing following its final break of the season for the 10th round of the 2018 season, with the 33rd running of the Massey Ferguson Unadilla National from Unadilla Motorsports Park.

In the 450 Class, Team Red Bull KTM Factory Racing’s Marvin Musquin mastered the muddy conditions to emerge with his third victory of the season. In the 250 Class, Monster Energy/Yamalube/Star/Yamaha’s Dylan Ferrandis swept both motos to take his second overall win of the season.

The first 450 Class moto got underway with TPJ Racing’s Dylan Merriam grabbing the Motosport.com Holeshot over RMATV/MC-WPS-KTM’s Blake Baggett and Musquin. Almost instantly Musquin pressured Baggett and made the move into second, quickly followed by a pass on Merriam to take over the race lead. Championship point leader Eli Tomac was credited with eighth on the opening lap aboard his Monster Energy Kawasaki.

Musquin was able to take full advantage of a clear track and set the pace early, allowing him to open a comfortable gap over his nearest competitor. Baggett inched onto the rear wheel of early race leader Merriam and made a successful pass for second, followed by Rockstar Energy Husqvarna Factory Racing’s Phil Nicoletti, who also found his way by Merriam for third.

Just moments later, the New York native Nicoletti continued his march towards the front with a pass on Baggett for second. As Musquin continued his impressive riding out front, Nicoletti used his mud experience to keep the KTM rider in sight.

Tomac worked his way into fourth but was forced to make a stop in the mechanics’ area for a goggle change, managing to lose only position in the process. The stop by Tomac proved to be a good decision as he started blitzing his way towards the front and around Baggett for third by the end of Lap 5. The battle for the lead began to heat up as Tomac powered by Nicoletti for second on Lap 7 and was hot on the rear fender of championship rival Musquin.

There was no stopping Tomac as he launched by Musquin to take over the race lead. Similar to Tomac earlier in the moto, Musquin made the decision to stop for goggles and managed to maintain his hold on second. Tomac was in a class of his own out front and continued to build on his lead throughout the remainder of the moto. He took the checkered flag 25.7 seconds over Musquin, who went unchallenged for second. Nicoletti rode to a hard-fought podium position in third.

The final 450 Class moto saw Musquin grab the Motosport.com Holeshot, but he was soon overtaken by Nicoletti, who wasted little time in sprinting to a lead. Tomac, who got off to a much better start in third, was shortly passed by Monster Energy/Yamaha Factory Racing’s Justin Barcia but took back the position in the very next corner after Barcia lost traction and slid out. Nicoletti held a lead of nearly five seconds at the completion of the opening lap.

Nicoletti kept his home state crowd on their feet as he led the star-studded field around the slippery and deep rutted circuit. With racing lines beginning to take shape, Musquin found his stride and began his attack on Nicoletti for the lead.

On Lap 3, Musquin carried his momentum around the outside of Nicoletti and into the lead, while Tomac also made the move on Nicoletti for second. Despite the challenging conditions, Musquin was relentless out front as he continued to push the pace and extended his lead on Tomac with each passing lap.

Nicoletti, who was riding strong in third, would soon feel the heat and get passed by the Monster Energy/Yamaha Factory Racing duo of Cooper Webb and Barcia on Lap 7. Just one lap later, Barcia used an aggressive pass to overtake his teammate for third.

As the checkered flag waved, it was Musquin emerging with his with his fifth moto victory of the season by 30.9 seconds over Tomac. Third would go to Barcia, who overcame several crashes to land on the podium. Musquin’s 2-1 moto scores gave him the overall victory and the advantage in a tiebreaker with Tomac thanks to his better second moto result.

Tomac finished second overall (1-2) on the day, while Nicoletti earned a career-best third overall (3-5). “It’s nice to get the job done today and grab another overall victory,” said Musquin “I was a little bit disappointed that I let Eli [Tomac] get around me in that first moto after I had to stop for goggles, but it was nice to come out fired up for that last moto.

We managed the points today in these difficult conditions and I’m still in the championship hunt, which is the most important thing.” Tomac maintains a 15-point advantage over Musquin in the 450 Class standings with two rounds remaining.

Barcia’s fourth overall (8-3) moved him into third and ahead of Team HRC Honda’s Ken Roczen. He sits 85 points behind Tomac.

The rookie Mosiman rode like a man possessed at the head of the field and opened a small cushion over Ferrandis and Harrison in the opening laps. On Lap 5, Mosiman began to feel the pressure from Ferrandis, who was hot on his heels and searching for a way around.

Shortly after, Mosiman crashed out of the lead and ultimately allowed Ferrandis to take over the number one spot. Mosiman’s mistake put Harrison and Plessinger into a battle for second, with the upper hand going to Plessinger. Ferrandis began to watch his lead diminish as his teammate Plessinger closed in, however, he would wick the pace back up and responded by pulling back away to build a commanding lead. Ferrandis was unstoppable en route to his third moto victory of the season with 35.5 seconds to spare on Plessinger.

With clear vision McAdoo was able to put the hammer down and sprint out to the early lead, leaving several riders behind him in the fight for second. On Lap 2, Smith tucked the front end of his KTM and found himself on the ground covered in mud.

That same lap, Ferrandis relied on his pure aggression to muscle by Harrison for second, but Harrison responded and took back the position just corners later. On Lap 5, McAdoo would find himself under heavy pressure up front and eventually surrendered to both Harrison and Ferrandis.

As Harrison and Ferrandis paced each other out front, Plessinger picked his way through the ruts and made his way around McAdoo for third. Plessinger would set his sights on the lead duo and begin chipping away at their lead. A dramatic 10th lap saw Plessinger jump his way past Ferrandis for second and eventually into the lead as Harrison encountered lapped traffic and crashed out of the lead. Ferrandis and Savatgy followed in second and third.

With Plessinger grabbing the lead, Ferrandis refused to settle as he put his head down and went back after his teammate to pass him back one lap later. Ferrandis finished the 30-minute-plus-two-lap moto strong and held on for his fourth moto victory of the season by 4.7 seconds over Plessinger.

Third was claimed by Savatgy, who earned his second podium result of the season. Ferrandis’ 1-1 sweep gave him the second overall victory of his career, edging out his teammate Plessinger in second (2-2).

The final podium went to Harrison, who earned a season-best third overall (4-4). “It was really a big battle all day today,” said Ferrandis. “For me, the experience I have from Europe really helped today. I’m used to not having a sighting lap prior to the race.

The dirt here is awesome when it’s raining and it was a really good racetrack. It’s not often that I have the chance to battle with Aaron [Plessinger], so today was special and it was nice to push one another for the win.” Plessinger’s second-place finish extended his lead to 78 points over Troy Lee Designs/Red Bull/KTM’s Alex Martin, who finished seventh overall (10-7).

Monster Energy/Yamalube/Star/Yamaha’s Justin Cooper finished ninth overall (12-6) on the day and maintains third in the standings.