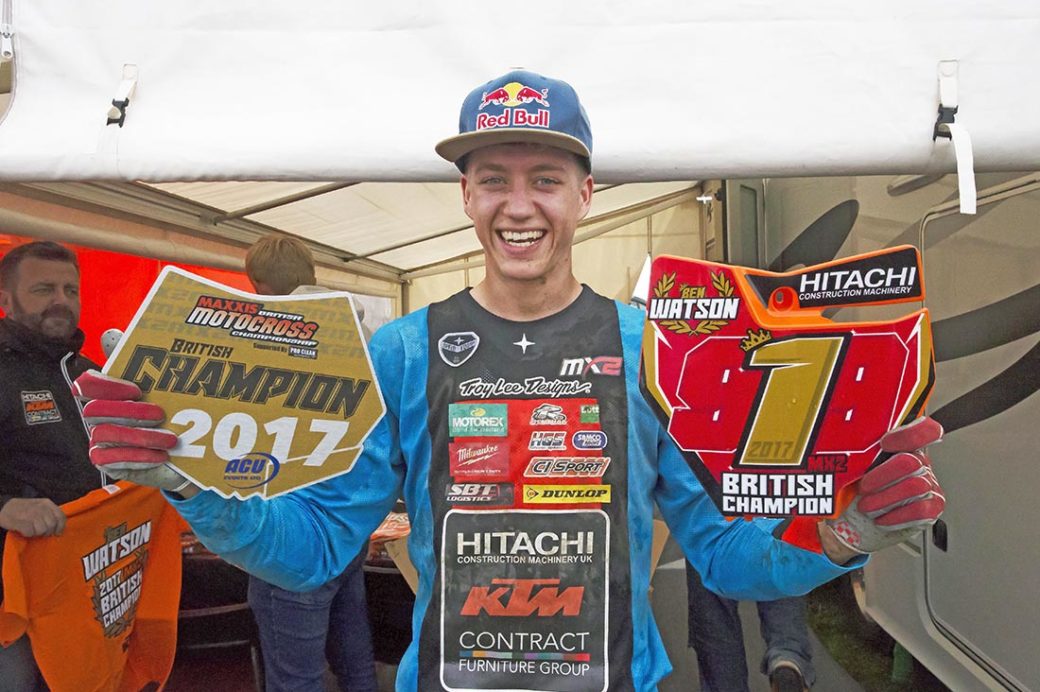 Irwin blasted to a double win while Watson settled for a win and a runner-up spot for second overall, as both champions were crowned with a round still to run.

There was tension in the air before the start of racing with Irwin – who even had his big brother British superbike contender Glen for support – said: “The championship is playing on my mind a little bit. I still have the last round at Foxhill but it would be nice to get it done and out of the way so I can relax a bit more.”

Luckily for all concerned the forecast rain didn’t turn up and after just a couple of showers overnight the hard work of the Preston Docks crew meant the track was in great racing condition.

Despite only qualifying fourth Irwin made his intentions clear from the start of the first MX1 race.

He got the holeshot, was passed by Brad Anderson a third of the way round the opening lap but came straight back, re-passing Anderson two corners later and from then the only time another rider saw him was if they were being lapped.

Dan Thornhill was in third followed by the fast-starting Rob Davidson, ironman Harri Kullas – who was doing four races again – Matt Burrows and Ryan Houghton, who seems to have got his starts sorted out.

After Kullas had passed Davidson for fourth on lap two the order at the font stayed the same till the halfway point.

While Irwin and Anderson had opened up a bit of an advantage over the rest Kullas and Houghton started to close in on Thornhill but behind them more riders were coming to join the fun.

Gert Krestinov – second in the championship before racing and Irwin’s main threat – had his usual midfield start in 16th place. He was making his way up towards the sharp-end of the pack in the second half of the race until steam started to escape from a broken radiator on his Phoenix Honda and he ended the race in sixth.

World enduro star Nathan Watson was having a wildcard ride on a bog-standard 450 KTM that he only picked up on the Friday and after going down in the first turn he finished the opening lap in 26th.

By the end of the race, though, he was up to sixth and closing fast of the leaders.

Irwin crossed the finish line 11 seconds clear of Anderson in a lonely second place, followed by Kullas from Thornhill, Houghton, Watson and a smoking Krestinov.

Irwin was not messing about in race two as he got the holeshot and disappeared into the distance.

Stuart Edmonds chased Irwin round the opening lap followed by Watson, Thornhill, Houghton and Kullas, with Krestinov and Anderson back in ninth and 11th places, leaving themselves a lot of work to do.

Watson took over second place at the start of the second lap as Krestinov and Anderson made their way forward, bringing Jamie Law with them.

At the halfway stage the top three of Irwin, Watson and Edmonds were the same but Krestinov now headed Kullas and Anderson, with Thornhill slipping back to seventh.

With four laps to go a slip by Edmonds let Krestinov and Anderson through, while Kullas held on to fifth ahead of Carlton Husband.

Irwin took his second win of the day and with it the MX1 championship from Watson, Krestinov, Anderson, Kullas and Husband, while overall on the day it was Irwin from Anderson and Watson,

with Kullas just missing out on the podium.

“Wrapping up the title a round early is perfect. Winning this championship was a dream of mine since I was a kid and with hard work and dedication we are finally here.”

Anderson was happy with his second overall and said: “I got a really good start in the first race and passed Graeme (Irwin) for the lead but he came straight back at me and took it back.

“Half the track he was quicker them me but I seemed to be quicker at other places. By the last three laps, though, I had used up all my energy and had to settle for second.

“I had to take the spare bike out for the second race as we had a rear brake problem with the first one and it felt a bit stiff as it was a new one.”

Third-placed Nathan Watson, who made a last-minute decision to ride, said: “I only got my 450 KTM on Friday afternoon and it’s completely standard.

“I ran it for an hour before coming here and I was undecided until the morning if I would ride it or not. If it had rained I would have stayed in bed but as it was okay I came.

“It’s my first Maxxis since 2014 so it’s nice to be back if only for a wildcard ride and it’s been a good day with third overall and also to see my brother Ben win the MX2 title he has worked so hard for. “I am very proud of him.”

Darian Sanayei blitzed MX2 qualifying from Brad Todd, Jake Millward and Josiah Natzke with championship contenders Watson and Martin Barr in sixth and seventh place but as the first race rounded turn one it was Sanayei from Natzke and Watson with Michael Eccles fourth as Barr messed up his start and was in 14th place with lots of work to do.Sanayei, Natzke, Watson and Eccles played follow the leader for the first eight laps as Barr made his way forward, passing Alexander Brown for fifth.

On the very next lap Watson found away passed his team mate Natzke for second place and took the lead and the win from Sanayei with two laps to go.

Barr spent his second half of the race closing the leaders down and passed Eccles on the very last lap for fourth place.

So Watson took his first win of the day by just under six seconds from Sanayei with Natzke, Barr and Eccles filling the next three places as Brown finished a great sixth place.

Natzke got the holeshot at the start of race two from Watson and Sanayei with Kullas fourth, as again Barr didn’t get the start he needed and was in ninth place. Five laps in to the race and with the top three riders still very close together Natzke made a mistake which let Watson through into the lead and Sanayei into second.

A couple of laps later the fast pair had opened up a bit of a gap over Natzke as the rest of the pack started to close in on him.

Watson’s time in the lead was short-lived, though, as two laps later Sanyei was back in the lead and – perhaps with the championship in mind – Watson stayed where he was, leaving Sanayei to cross the finish line seven seconds clear of the new champion, with Kullas a distant third.

“I did a British championship race back in 2015 but this is my first overall win,” said a happy Sanayei. “The track was great, one of the best I have ridden in the UK.”

New MX2 champion Watson said: “I am completely overwhelmed with it all at the moment but it’s great to get the pressure off by winning the championship with a round still to go.

“It would have been terrible to have to wait another month to win it.

“Riders always say this after a win but I have to say it to because it’s true; I couldn’t have done it without the team effort and I must say a big thank you Hitachi KTM, Red Bull, and the Contract Furniture Group and all those who stood behind me and had faith in me after spending most of last year being out of racing with a broken foot.

“And of course mum and dad who travel the world with me supporting and encouraging me .”

A disappointed Barr said: “I made things hard for myself today but it wasn’t all down to me and it’s frustrating but I have to just get on with it.

“Everyone out there is riding really fast and you just have to get a good start as it’s hard to come through the pack. Twice out there I had to dig really deep and got back to fourth but I want to be up front winning.

“Fair play to Ben (Watson) he rode well all year and I will just have to keep working.”

In MXY2 Jake Parker got the holeshot at the start of the first race but was passed by eventual race winner Lewis Hall as Jack Bincliffe came from fifth at the start to claim second at the flag, followed over the line by Keenan Hird, Charlie Cole and Ben Clark.

Hall got the holeshot at the start of the second race but crashed out of the lead on the third lap, leaving Hird to take over and win from Tom Grimshaw, Howard Wainwright and Cole.

Overall it was Hird from Bincliffe and Cole but in the championship Hird has a 24-point lead over Grimshaw going into the last round – so it’s all still to play for.