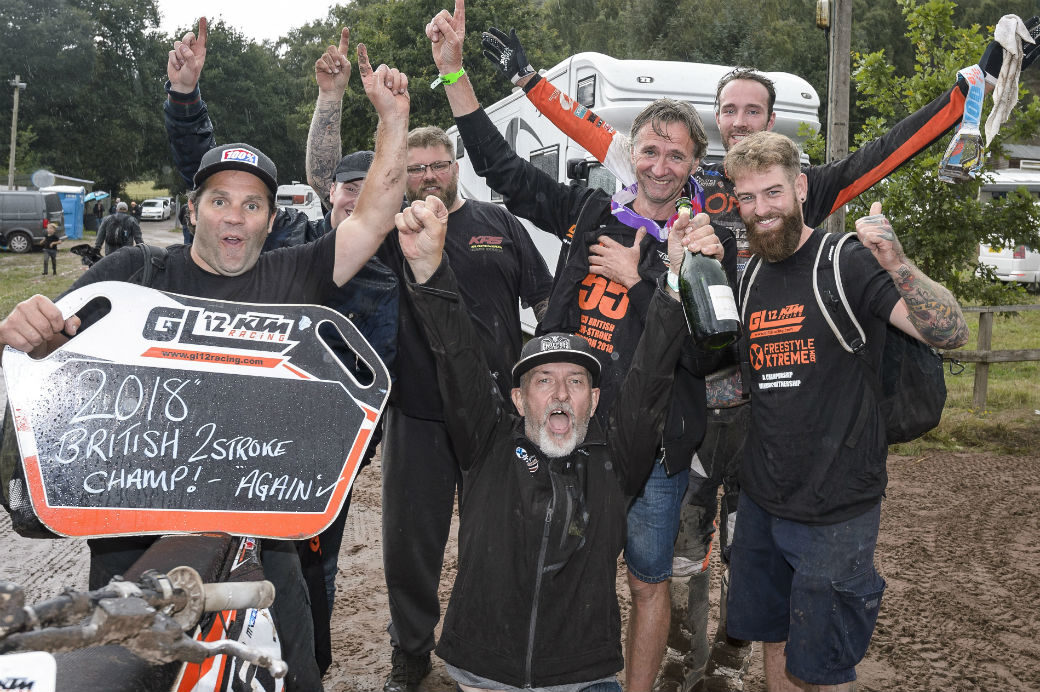 Ever wonder what it takes to win a British title on a shoestring budget? In this extraordinary open letter, GL12 Racing KTM boss Bob Buchanan tells it like it is…

‘We won the ACU British Two-stroke Championship for the second year running. That is what was seen from the outside.

‘Yes, I am pleased and proud of our achievements but it also highlighted to me the ridiculousness of what I am trying to achieve. I can only afford for Mike (Kras) and James (Dunn) to have two bikes each – they do the European championships on their race bikes with their practice bikes as spares. They do the British championship on their practice bikes with no spare. They have one set of suspension each.

‘Mike turned up at Hawkstone with his practice bike and went out in qualification and was easily pole, lapping fast enough to put him in fifth in MX2 or eighth in MX1. He pulled in after his hot lap with its main bearings gone.

‘We had with us a standard 2017, owned by one of the boys who works for us mocked up as one of this year’s bikes as a display. We’d put it through technical on Saturday just in case, never thinking we’d actually need it.

‘As everyone saw, the tail pipe fell off and we had to pit and bolt on a new one – embarrassing for us and frustrating for Mike but we dealt with it and got him out again and scored good points.

‘When the race was over I went through the bike and found it had lost nearly all its coolant because the radiator was leaking. I swapped the radiator and sent Mike out again on an old bike that may or may not make race distance having just done half a moto with no coolant. I mean, what could go wrong? It only had to go up Hawkstone hill 11 times.

‘I told him to nurse it home, to get on Ash Wilde’s back wheel and just sit there, short shift and bring it home which as an experienced professional he did and we won the championship – but it was a position he should never have been put in.

‘We simply don’t have the money to replace what needs replacing. We have to make things last longer than is ideal. Yes, it’s better to replace a £100 part to save a £2,000 engine rebuild or lose a championship but you can only do it if you’ve got the £100 at the time.

‘I do have a few good and loyal sponsors who believe in what I do and I am extremely grateful to them because we wouldn’t be here at all without them. When you put everything you have into something and you don’t enjoy it you have to start questioning your motives.

‘I nearly didn’t run this year as I didn’t have enough money and at times wish I hadn’t. Unfortunately, there isn’t enough money in MX it seems to sponsor teams to give good riders with no money a platform to show their skills. Just teams that take on riders who can pay the teams to run them, whether they are capable of winning anything or not.’