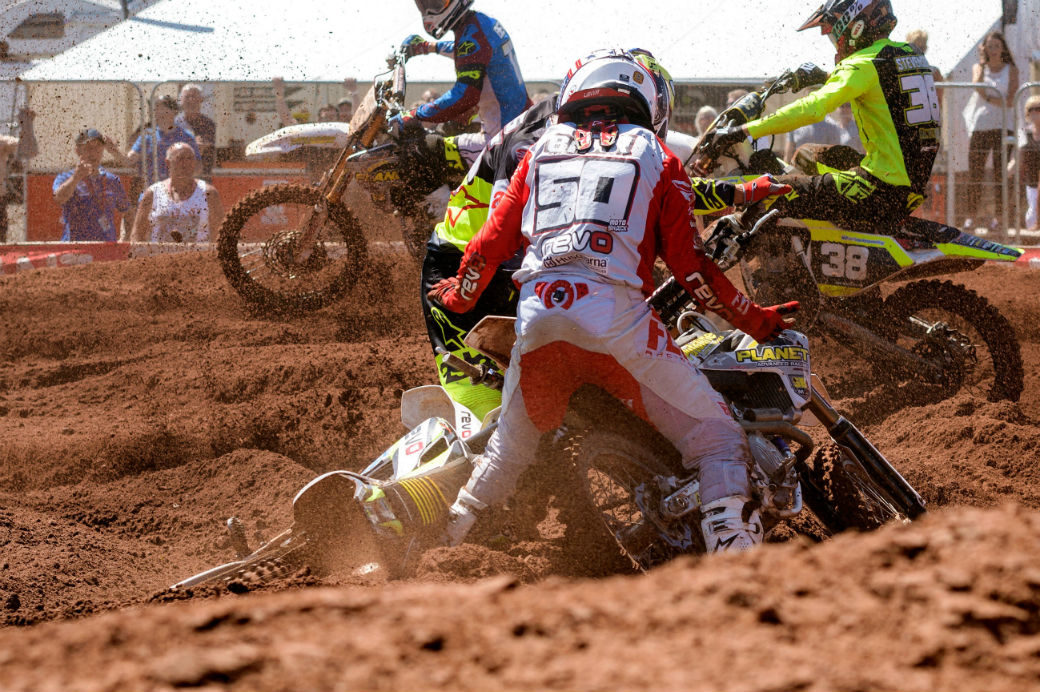 Martin Barr’s hopes of repeating his 2017 MX2 overall win at Desertmartin ended on the opening lap of race two on Sunday when he collided with Lewis Tombs and their bikes got locked together.

A strong second in race one, the REVO Husqvarna UK rider was dead last at the end of the first lap and could only recover to 17th which left him eighth overall.

“I was really looking forward to my home round – the track was looking absolutely fantastic, my bike was working a treat and everything in the team was perfect,” he said.

“There was no reason why I couldn’t go out and perform. I’m disappointed. Obviously, I’d have loved to have been on the podium at my home round and “I’ve lost a lot of points in the championship. It’s my third week on the bounce with bad luck and they say it happens in threes so hopefully that’s an end to it.”

His team-mate Mel Pocock followed him home in third in race one and was lying in second in the closing stages of the second moto when an unforced error dropped him to fifth, costing him a podium finish.

“It was frustrating really after that brilliant first race for the team with me third and Martin second,” he said. “I moved up to second [in race two] and sat there nice and simple but with three laps to go I crashed on my own and that small mistake cost me a great result so it was a bit of a bitter-sweet weekend.

“On the plus side I’m healthy and have got a few weeks to get over the busy first half of the season.”
Team boss Mark Yates was remaining positive.

“Not the best weekend for us but at least we know we have the speed to be up front and I was very pleased with the first moto – after going 2-3 with Martin and Mel we were confident of getting one or even both on the podium!

“We now need to work hard on our qualifying and starts with a focus on the next European round at Lommel.”