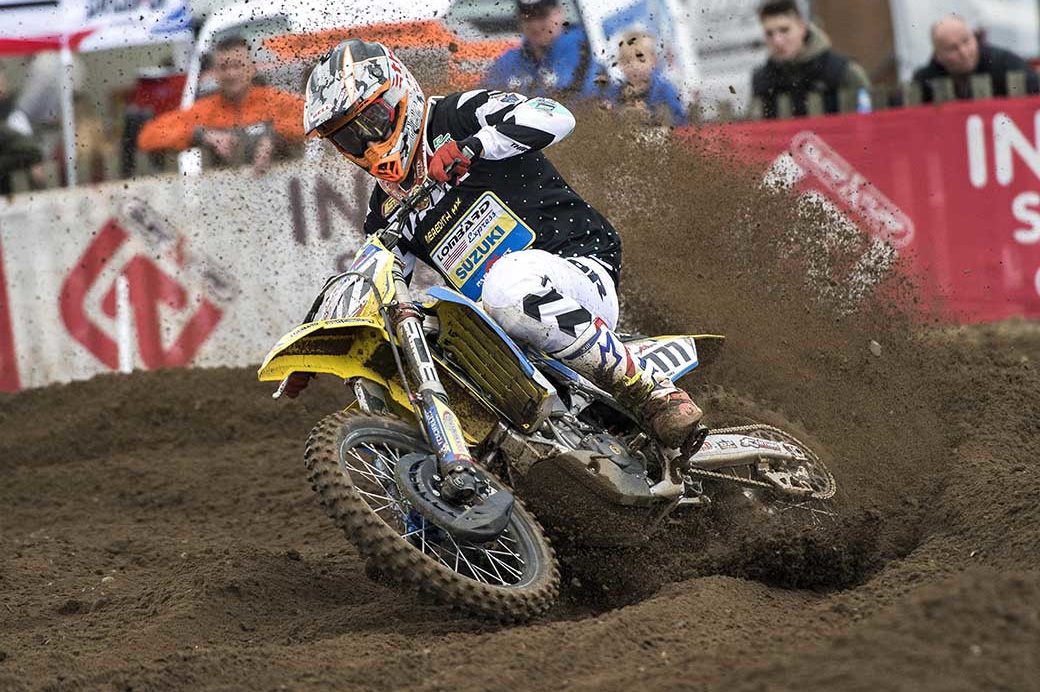 Regular readers of TMX will hopefully remember that we recently asked for your votes in the 2018 TMX Awards thingymajig that we ran in association with Bridgestone. It seems that a lot of people are keen to know the outcome so I figured that I should probably address the issue. Which I will – next week maybe or the week after that perhaps…

Moving on to the last round of the British Motocross Championship now and what a thriller that was. In case you’d missed it (or ICYMI for any millennials reading this) the scenario was this – or thus for all you pre-65 class eligible readers.

Buildbase Honda’s Jake Nicholls led the MX1 title chase by 39 points which would have made him a shoo-in had he not snapped his lower leg the other week at an Eastern Centre centre
meeting. D’oh!

Evgeny Bobryshev was the only rider mathematically capable of wrestling the title away from but he’d need to finish third or better in both motos to seal the deal.

Prior to Lyng the Russian’s point average per moto though was 18.36 which wouldn’t have been enough but working in his favour was the fact that Nicholls wouldn’t be racing and neither would Graeme Irwin who bust his wrist at the Imola Supercross round of the MXGP series.

A few additions to the MX1 entry list were unlikely to affect the outcome massively and on the day Bobby ran 2-2 behind a dominant Tommy Searle – he’s won at Lyng more often than he’s been beaten there in recent years – to secure his second British title.

There’s no denying that Bobryshev deserved to win the championship as not only was he the top scorer over the seven rounds held in the course of the nine-date championship but he’s a real class act too and a genuinely great ambassador for the sport. So well done to him but less well done to whoever it was that was employed to spray him with champagne as he crossed the finish line – you had one job *shakes head*…

Congratulations to the rest of the Neil Prince-led Lombard Express/PAR Homes team though and also Suzuki GB because who’d have thought that the RM-Z450 would have won the two biggest titles in British motocross in 2018 – that’s the Arenacross crown and Maxxis series. I wouldn’t like to be in charge of signing the bonus cheques over there this year.

I know that Jake Nicholls is gutted by the outcome but I think he needs to remember that he was the absolute man when it came to motocross in the UK this year and that’s what the majority of people will remember when they think about 2018. That and also what unfortunate weather we had all year as well as the ridiculousness of the Foxhill candle in the wind (or lack thereof) dealio.

In other news, another wily old vet secured a big win at the weekend and that was TMX Awards recipient Dougie Lampkin (you can have that one for free this week although I’m not gonna tell you which classification he topped) who won the Scott Trial for the sixth time.

I absolutely love this event and it’s one of the staple journeys for the Sutton family people carrier each and every year. JD came up with a Scott fact the other day and that was that it used to be a round of the British championship.

With the knowledge that TrialGP promoter Jake Miller is also a fan of the time and observation classic I wonder how much arm twisting it would take for him to include it into the world championship schedule?

And as daft as that sounds the reality is actually not so stupid when you think about it because if it was limited to the proper world championship classes (TrialGP, Trial2, Trial125 and TrialGP Women) there’d still be a stack of room in the 200-entry for the national and local riders, spectator numbers wouldn’t actually be that much greater than they are already and so the only thing that would suffer is the riders – and they deserve it anyway!

Make me look terrible on a motorcycle will you? So remember that you read it here first – and will probably never read of such madness ever again. Well, until next week when I’ll be unfixing something else that isn’t broken.