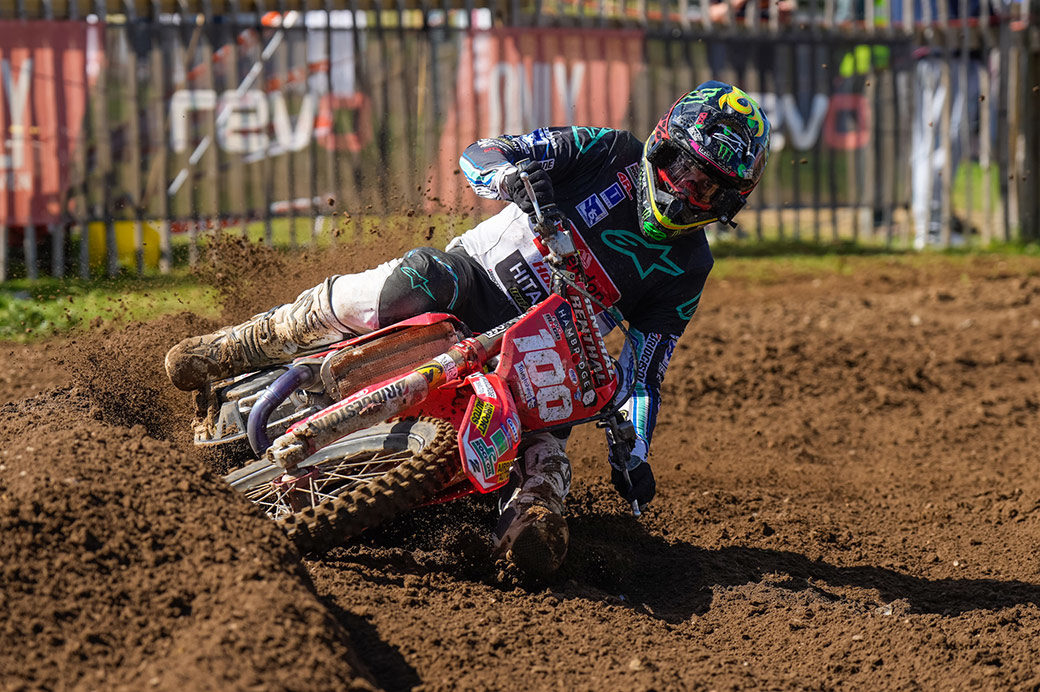 The Crendon Fastrack Honda team of Tommy Searle and Jake Nicholls both ended up on the MX1 podium in round three of the British championship at Lyng on Sunday after some close and thrilling racing.

Red plate holder Searle took the overall victory on his Honda CRF450R while Nicholls took a fantastic third overall – his first time on the British championship podium since he won at Hawkstone Park in August 2018.

Searle was in stunning form at the sandy circuit in Norfolk, setting the fastest time in qualifying. In the opening race he made a good start and quickly moved into second place behind title rival Harri Kullas. On a track that proved very difficult to pass, Searle staged an incredible late-race charge to set his fastest lap on the penultimate time around the roughening circuit. But he couldn’t get by and took second, around one second behind Kullas.

Second time out and Searle was in no mood for second place as he took the holeshot and led every lap to take a dominant win. He controlled the race and only lost a little ground to second place Kullas when he got held up by backmarkers. But the current British champ held on for a classy win, meaning he has won four of the six motos this year, with one second and one third-place finish. He has a 14-point lead.

Searle said: “Definitely a decent day with a second and a first in the races and I won qualifying as well. You need a good start here as it’s very difficult to pass. I was third at the beginning of the first race but got into second behind Harri and he was riding so well. In race two I got away first and broke away then got caught up with the lappers. But I then pulled a gap again to take the win.

“It’s so nice for Jake to get third as I know he’s worked hard. And it’s definitely great for Crendon Fastrack Honda to have both riders on the podium.” 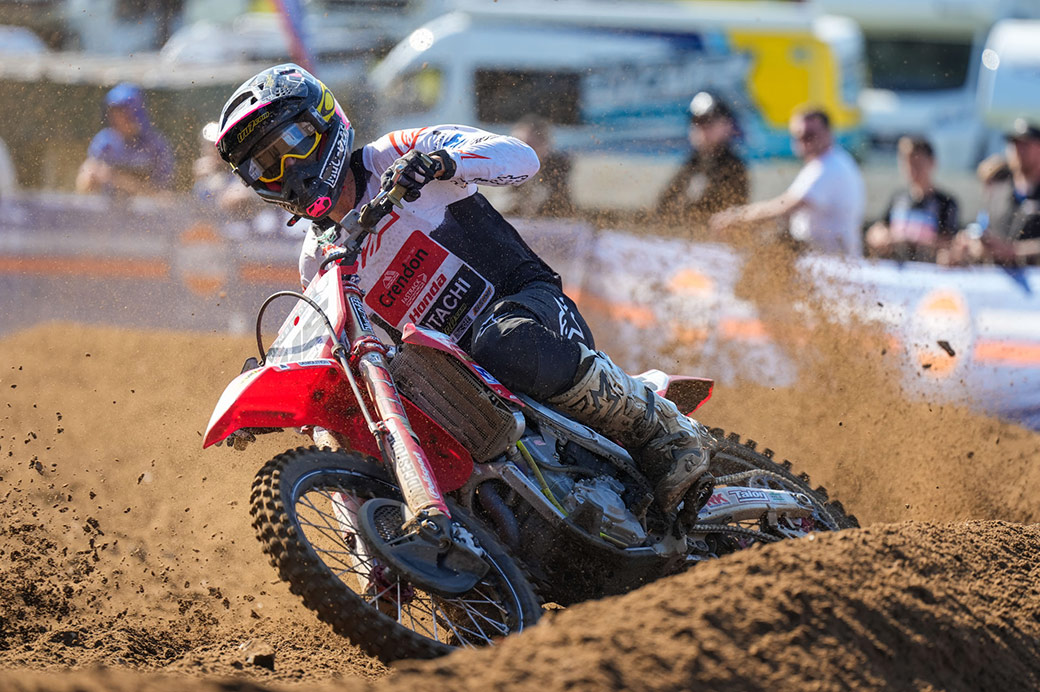 It was a real return to form for Searle’s MX1 team-mate Jake Nicholls, who struggled in the last round after crashing and hitting his head hard then was hit by a virus. After an intense testing programme in the days before the Lyng round, the Suffolk ace simply got better every time he went out on the bike.

After taking sixth in qualifying, Nicholls had a decent start in the opening moto and worked his way through to a solid fifth place. Then in race two he rounded the first lap in third and stayed within sight of the leaders all moto. He began to close in on second place Kullas but couldn’t quite make up the gap and took a well-deserved third place. This put him onto the final place on the podium and he was elated to get back to such incredible form. He also leapfrogged from tenth to fifth in the championship chase.

Nicholls said: “That was better! I’m so pleased to get back to where I think I should be. We worked on the bike and I feel so much more comfortable. It shows that when you want something bad enough, it can happen. The crowd were going for it and I gave everything I had.” 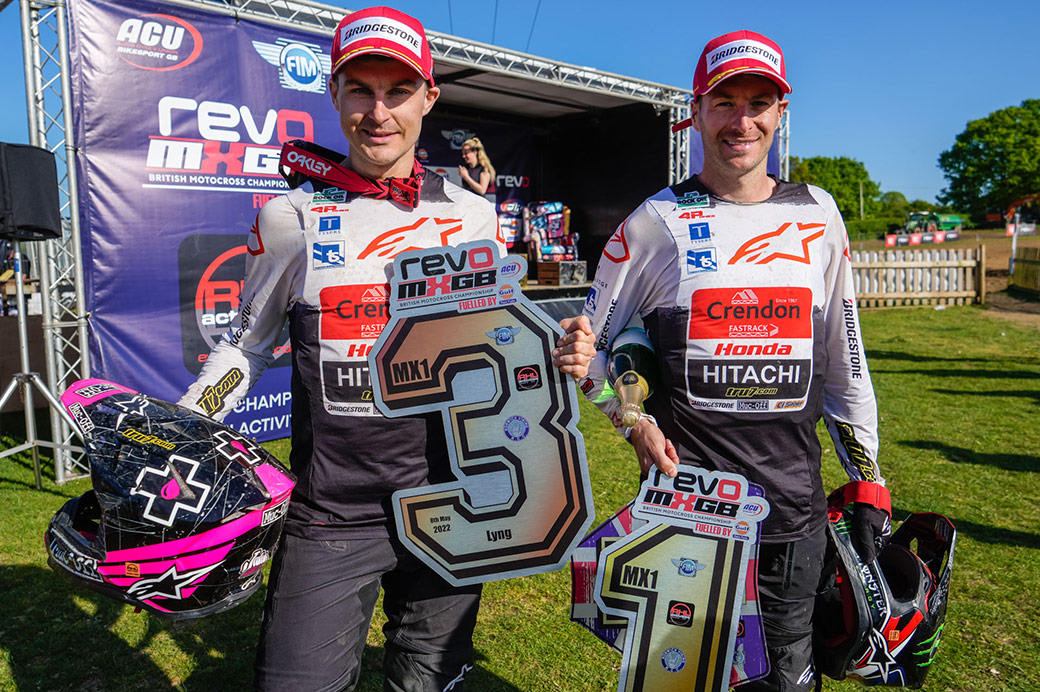 Team manager, triple 500 world champion Dave Thorpe, said: “What a stunning day for Tommy and Jake and it’s a whole credit to the team – riders, mechanics, technical partners and everyone involved. Just an amazing result.

“For Tommy, I truly believe he was the fastest rider all day. Although his start in the first race meant he couldn’t win as the track was so difficult to pass on, in race two he showed his speed by leading and controlling the race. The only time he lost a bit of ground was with lapped traffic. But he had everything under control as he took the win.

“And I’m so pleased for Jake to get a third place finish and third overall after what’s been a tough start to the season. He had a great week coming into the event working with his mechanic Rob, engine tuner Ryan and suspension tuner Mark Eastwood. You could see Jake’s confidence and self-belief improving during the day. He now knows he has the pace to run at the front after such a great ride.

“Let’s hope our two MX1 riders take this form to the next round at Canada Heights when hopefully our MX2 rider Jay Hague will be back from injury and fit enough to race.”