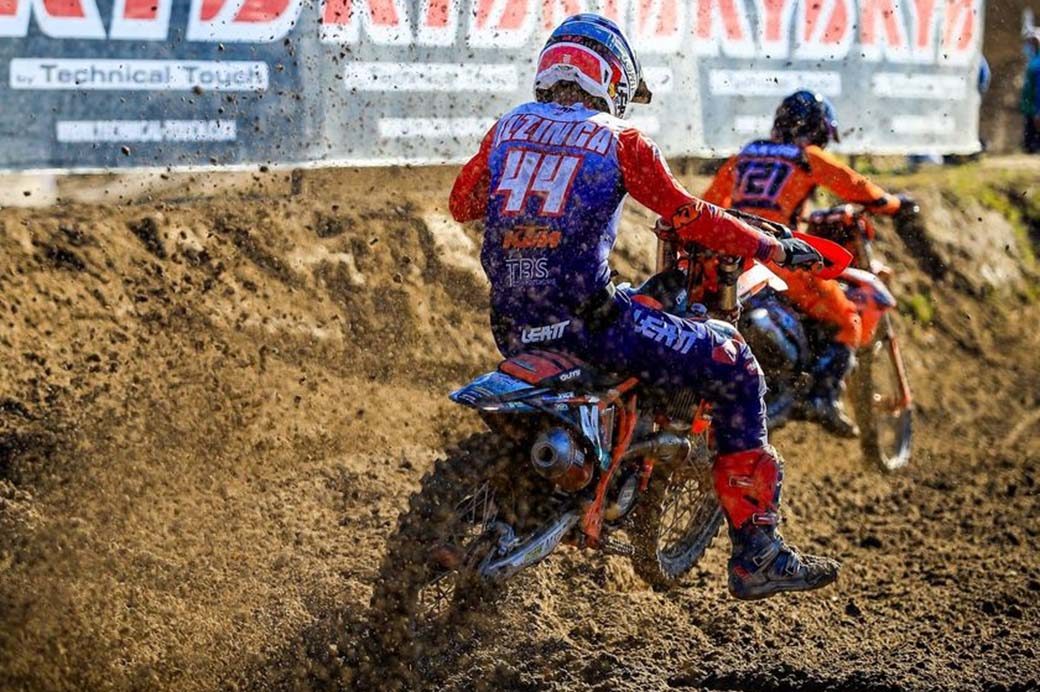 Yamaha Motor Europe has confirmed its EMX125 and EMX250 roster for the 2022 European MX campaign with Hutten Metaal Yamaha running the 250 effort and MJC Yamaha looking after the 125 young guns.

Spearheading the effort in the MX2 feeder class, EMX250, Elzinga makes his return to the Yamaha family after a two-year hiatus.

The Dutchman demonstrated his capabilities in the 2021 EMX250 Championship with an emphatic overall victory at his home round, the first of his career. The 19-year-old went on to score another three podiums, before securing the EMX250 bronze medal with a third-place finish at the final round in Mantova, Italy.

After winning the EMX125 Championship in 2020, Bonacorsi moved up to the highly competitive EMX250 class in 2021, joining the Hutten Metaal Yamaha Official EMX250 team.

Raising the bar for the next crop of up-and-coming talents, the 18-year-old Italian completed his first full term in the 250cc category in fourth overall after proving his true potential with a pair of back-to-back race wins at two of the three rounds in Pietramurata, Italy. The rookie sensation also raced his GYTR kitted YZ250F to the podium on three further occasions and will look to add to that tally to mount a title challenge next year.

Remaining with the Hutten Metaal set-up for a third full-season, 16-year-old Kooiker hopes to line up fit and strong in 2022, eager to inch closer to the front runners.

In the EMX125 series, the MJC Yamaha Official EMX125 team is thrilled to continue with its trio of proven title challengers, Van Erp, Reisulis and Zanchi.

All three MJC Yamaha riders celebrated podium silverware in 2021. Van Erp emerged as one of the major title contenders with three race and round wins at EMX125 events in Germany, Spain, and Italy. After starting the 2021 season with an injury, Reisulis bounced back with a vengeance. The 16-year-old Latvian rounded out his season with two overall podiums at the final two rounds in Italy, finishing second on both occasions. Zanchi was classified second overall at the first round in Matterley Basin, while the Italian’s first full season in the series also included an impressive race victory in France.

All three riders are confident and eager to continue racing the highly competitive GYTR kitted YZ125 inside the EMX125 Championship in 2022.

Hutten Metaal Yamaha Official EMX250 Team Owner Wim Hutten: “I am happy and proud to run Yamaha’s Official EMX250 Team for a third year in a row. For this upcoming season, we add Rick Elzinga to the team, which is exciting because we are a Dutch-based team and he is a Dutch rider and is also close to the Hutten Metaal area. It is also nice to keep Andrea, after an excellent rookie season, and Dave who will continue with us for another year as well. We see a lot of potential in this line-up, and our team will do all we can to give them the best opportunity to show what they are able to achieve.”

MJC Yamaha Official EMX125 Team Owner Loic LeFoll: “I am so happy to continue working with these young riders. All three riders are very talented, which is exciting for our team, and in addition to that, they are very hardworking and have great attitudes on and off the bike. I really enjoy working with riders like this, and we are already looking forward to the new season. The team is motivated, the riders are motivated, the YZ125 is a fantastic bike and we are excited for the 2022 season.”

Racing Coordinator Thorsten Lentink: “We are already looking forward to the 2022 European Motocross Championship after securing a strong 2022 line-up for both of our Official EMX250 and EMX125 teams.

“In EMX250, after an incredible rookie season with Andrea Bonacorsi finishing fourth in the EMX250 Championship, we are excited to keep Andrea on board for another season where we hope to regularly challenge the podium.

“In addition, we have also retained Dave Kooiker. He has just turned 16 and is a young talent on the rise, he started the year strong and solid but ended up facing some struggles later in the season, he has shown that he is a fighter and will keep pushing forward.

“And finally, we are super happy to re-sign Rick Elzinga. Rick is a rider who we started a relationship with inside the MJC Yamaha Official EMX125 team a few years ago, and despite a couple of challenging seasons that were spoiled by injury, he bounced back strong in 2021 and has proven that he is a title challenger in the EMX250 class. Rick is a true talent and a real asset to the Hutten Metaal Yamaha Official EMX250 team, especially as he comes from the same area as the title sponsor, Hutten Metaal.

“We are really looking forward to working with these three riders and helping them reach their full potential.

“In the 125cc category, I am very happy that we can continue in 2022 with the exact same team. We have made a big step forward, and we have proven that we can fight for race and round wins. This year, we landed on the podium with all three of the MJC Yamaha riders, Ivano van Erp, Karlis Reisulis and Ferruccio Zanchi, and many times we had the fastest lap times. We are definitely podium contenders and very competitive, so I look forward to continuing in this direction with all three riders and the GYTR kitted YZ125.”