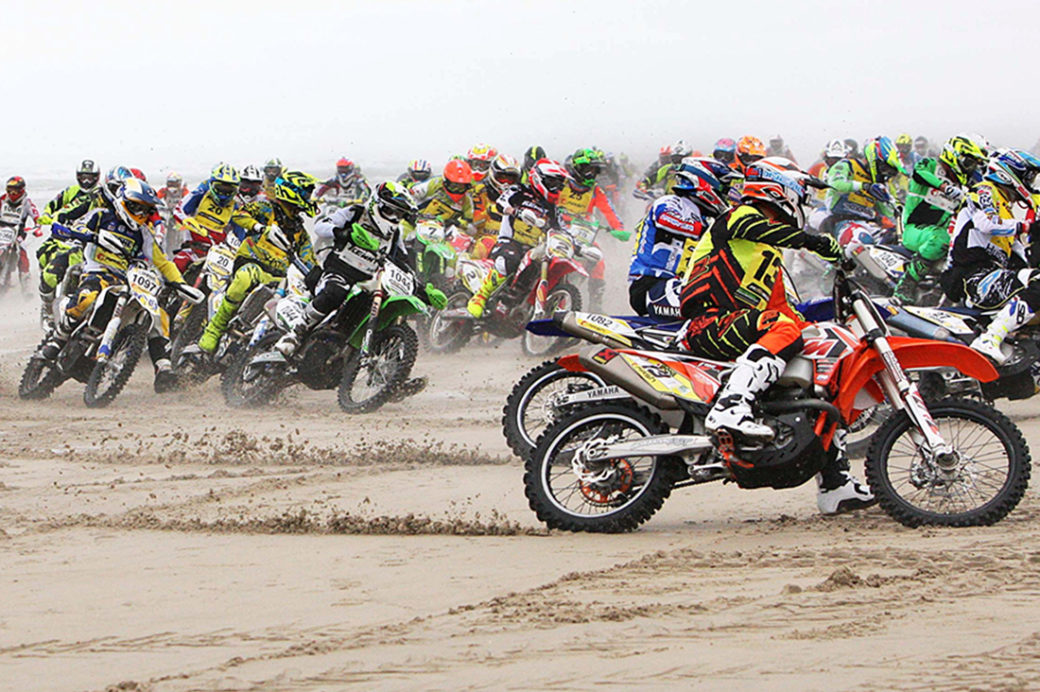 Next weekend, January 29 to 31, it’s all down to the beach again for the annual Enduropale du Touquet 2016 – the Le Touquet beach race to you and me.

Without a question it’s the biggest and beach race in the world with the largest number of starters in a mass start, the longest and toughest course that stretches five-miles down the coast from the massive patch of sand that is Le Touquet beach, and the biggest crowds with a record braking 250,000 one year when the weather was kind.

The event is now spread over three days with the ‘Enduro Vintage’ on Friday, which is for older riders on Evo machines.

On Saturday it’s the turn of the ‘Enduropale Juniors’, for younger riders, and won a couple if years back by Britain’s very own Ben Watson in dominant style.

This will be followed by the ‘Quaduro’ in the afternoon as 650-nutty quad riders go for it for three-long hours – both races on a shortened course.

After an hour long race for the 11 to 15-year-olds it will be time for the main event on Sunday for the big boys as 1,100 starters wi11 thunder down the beach all hoping to get to that first turn without incident.

The organisers have brought the start time forward to 11.45am this year, which is probably something to do with the tides.

Two years ago the race had to be cut short by 30-minutes because part of the course was flooded, caused by an unusually high tide.

After three-hours of torture the winner will be crowned in the area behind the finish line. Last years winner, and probably still hurting from his sixth place in the Dakar rally,

Adrien Van Beveren will be out to retain his crown but will have his work cut out for him as seasoned sand racers like Jean-Claude Mousse and Arnaud Demeester are sure to be pushing him all the way.

Former world motocross champion, Steve Ramon, can never be counted out, along with Marc De Reuver, who seems to love racing in the deep sand of France.

Runner-up two years ago, Milko Potisek will be using the event to get his fitness even higher before he starts a full campaign racing in the World MXGP championship.

As for British riders?

The numbers of UK participants have been falling over recent years, perhaps down to the cost to man and machine but Le Touquet regulars Eddy Sloane and Leslie Winthrop both have their names in the programme.

However, our best hope for a high place finish should come from Dan Thornhill, making his second attempt at the big event.

In the Quads ranks Sheldon Seal and Carl Bunce have got to be in with a shout as both are fit and go very fast in sand.

If you can’t make it over for the whole weekend you can catch Sunday’s big solo race on a day trip as its only a 45-minute drive from the channel tunnel.

The organisers park spectators at the town’s airfield and free bus service runs to the sea front to ease traffic congestion in the town.

Remember to pack warm clothing as has a habit of being cold in Le Touquet at this time of year – and it is still January after all.