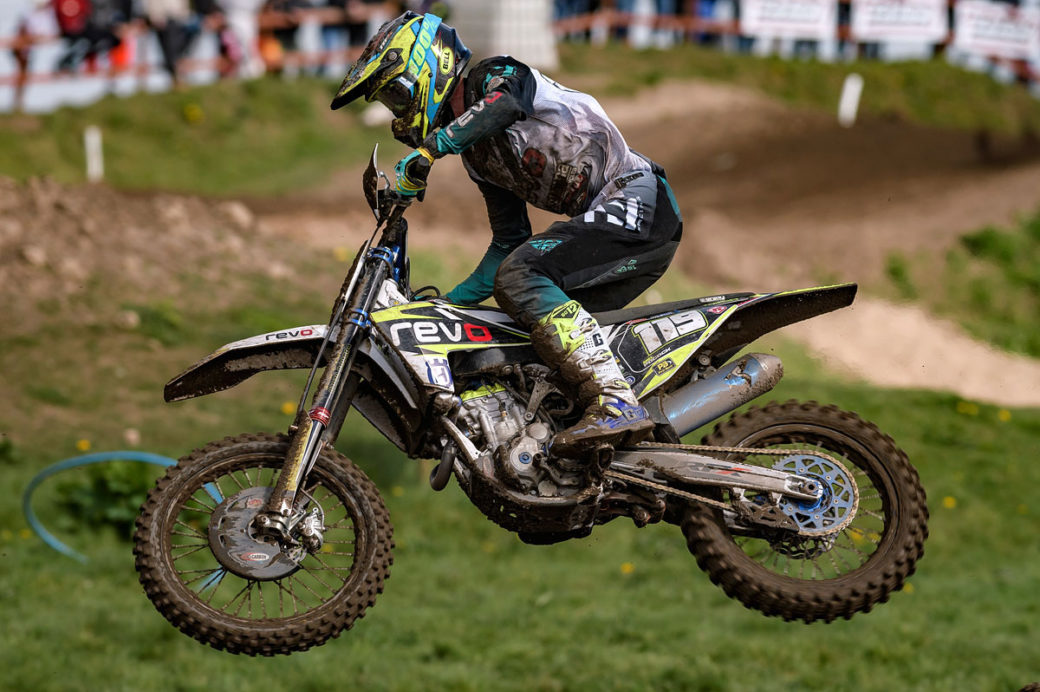 REVO Husqvarna UK’s Mel Pocock stormed to a fantastic overall win in the MX2 class at the opening round of the Michelin MX Nationals at Preston Docks on Sunday.

With the Pro MX1 and MX2 classes racing together over two 30-minute plus two lap motos it was always going to be a tough day for Pocock and his 17-year-old teammate Jamie Carpenter on their pair of FC 250s but both rose to the occasion.

Pocock, in his first full season back in action after sustaining a career-threatening hand injury in 2015, qualified third in class less than a second off pole.

Starting the opening moto near the head of the MX2 field but behind a lot of MX1 traffic, he quickly forced his way to the front of his class and controlled the race to finish first 250cc machine home.

A bad start in race two saw Pocock playing catch-up but he got his head down and made a succession of passes to cross the line second in class to secure the overall.

Carpenter, in just his second pro event, overcame problems in qualifying to run 15-16 in class in his first 30-minute plus two lap races for a solid 15th overall.

So competitive is the class, just four more points on the day would have placed Carpenter inside the top 10.

“It’s been a very successful day for the team. We set out with the goal to win it and we did.

“Mel had two mediocre starts but he pulled through and managed to get the job done. After his problems over the last two years it’s great to see him back on top of the podium and to know that all the hard work that we’ve put in is paying off.

“We had a few issues at the start of the season and we’re hoping now that we’ve resolved everything and we’re back on track.

“It’s a steep learning curve for Jamie to move from the youth class into professional racing and in all honesty, we may have been expecting a bit much from him.

“He just needs to take it one race at a time and get in as many laps as he can. Each week he’s putting in more and more and his results are improving every time.”

“Finally! It was a tough day but also a good day. It’s tough racing against the 450s and the MX Nationals run their races 30-minutes plus two laps so they’re long old motos and there’s a lot to battle against when you’ve got your own race and also a 450 race all mixed into one. I ate a lot of roost.

“In the opener I got a good start and managed to push up to the front of the MX2 race but you’re still battling the guys in front on 450s and trying to put as many of them as possible between yourself and the 250s behind.

“In the second I had a bad start and came all the way through up to second so happy days – it was a good feeling.”It’s taken two years to win another pro race since my injury and it’s great to do it alongside Sam and Mark Yates. It’s a credit to the team and the bike and hopefully it’s all heading in the right direction.

“I’ve now got the red plate on the front of my bike for the next round which is mint.”

“It hasn’t been the best day for me and I’ve had a few little issues but you can’t help that sometimes and I’m confident we can sort them out.

“In qualifying I had an issue which meant I didn’t get a good lap in which meant I had a bad gate pick and that put me on the back foot all day. The first race was tough for me but I kept going to the end and in the second race I had a good first half and then just hit the wall but rode it out to the end.

“But it’s all good experience racing against the pros doing half-hour races, especially mixed in with the 450s. Now I know what to expect.”