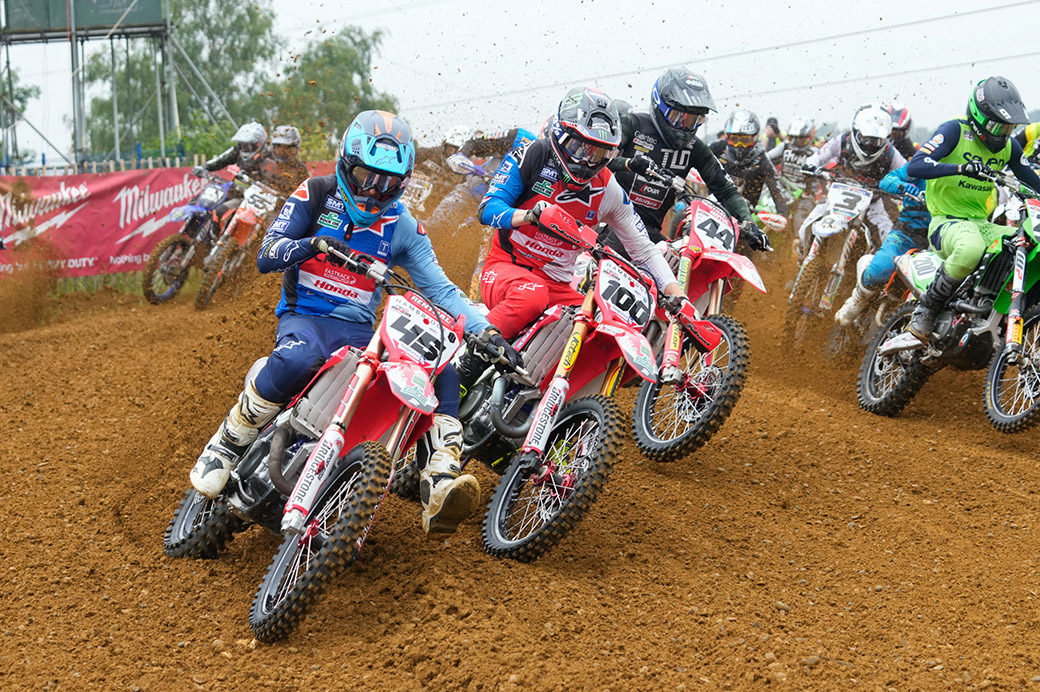 It was the first time all three riders in the Crendon Fastrack Honda team got to race together this year, and all three riders ended up on the podium in round three of the MX Nationals at Canada Heights in Kent.

Defending champion Tommy Searle took two race wins from four starts to clinch the overall in the MX1 class. And his team-mate Jake Nicholls, back from a shoulder injury that has kept him out of national-level racing, took a stunning second overall.

And in the MX2 class, gritty Jay Hague took third overall despite not finishing one race due to a spill that damaged his bike, and going down in another moto in a clash with a slower rider. 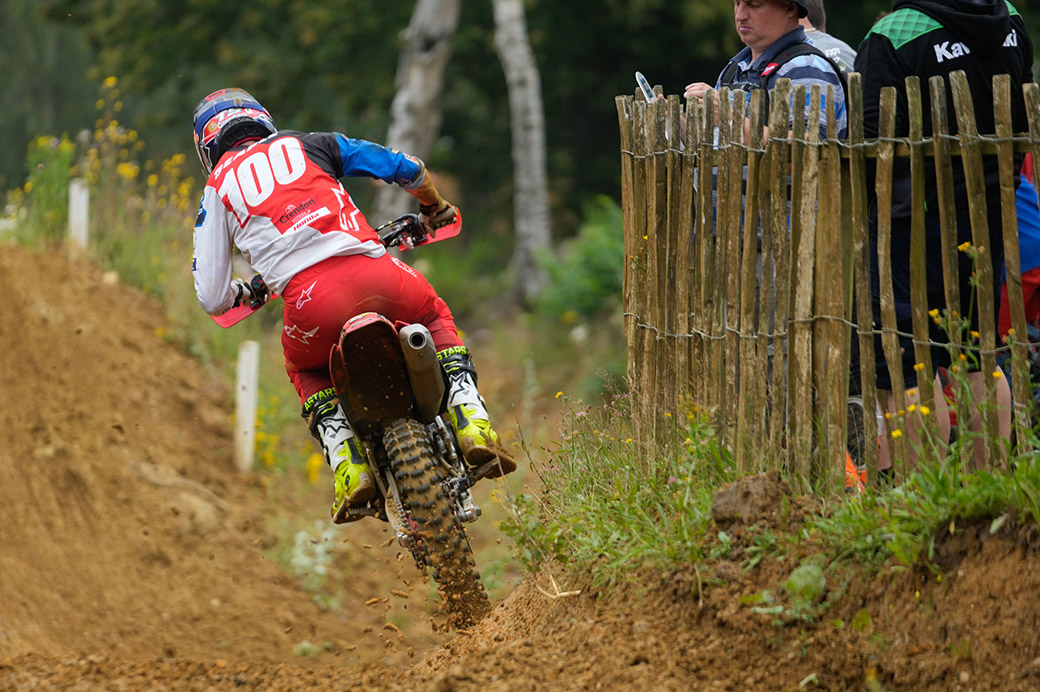 The opening MX1 moto was a warning shot of what was to come as Nicholls and Searle exited the first corner side by side and the duo were quickly challenging for the lead. Searle slipped off while trying to overtake his teammate and remounted, fighting back to fourth while Nicholls took second place.

Searle was out to make amends in race two and took a start-to-finish win, with Nicholls third. So at the end of day one, Searle led overall by a single point from his team-mate. Day two saw Searle once again dominate and take victory in the opening moto, with Nicholls third once more.

The deciding final moto was in treacherous conditions as rain just before the start turned the hard and bumpy track into a greasy test of nerve.

Searle took the holeshot again on his potent Honda CRF450R and led, but wisely didn’t fight back too hard when he was challenged for the lead. He took a calculated third in the race for a clear overall win. And Nicholls, who didn’t get a great start this time, came through the pack in a series of brave overtakes to claim fifth place and a brilliant second overall.

Tommy Searle said: “I got the overall and a couple of race wins so that’s a really good weekend, I really enjoyed the track and the bike handled so well. In the last race, the rain made it so slick and I was running a paddle tyre for the start which was not ideal on the slippery track. I led but after that wasn’t so comfortable so was happy to bring it home third to take the overall win. A mega weekend!” 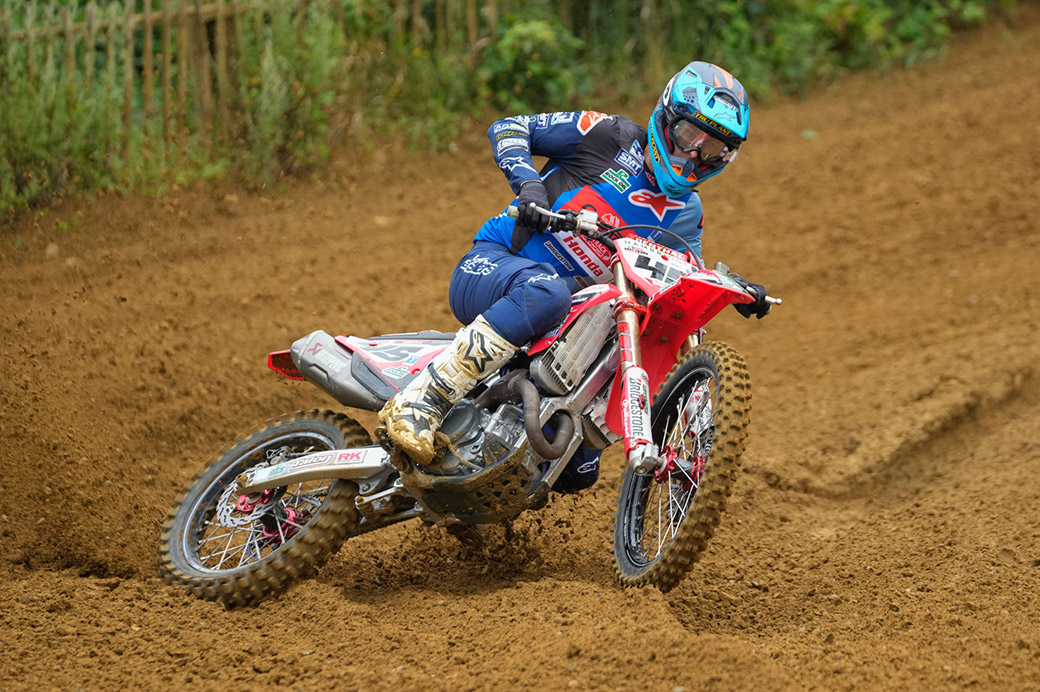 Jake Nicholls: “It’s so nice to be back on the national scene, under the awning with the team representing again at national level. I really enjoyed myself. I was definitely riding a bit tense and not really relaxed on the bike all weekend, but I was pleased with the results I got. I was a bit frustrated as I’m chasing bike set up but I was just determined to do well.

“I had really good starts apart from the last race where I had to come through some traffic. It was the first time I had to really overtake other riders and I think I rode the best in that race. I just had a great weekend and it’s great to be back.”

In the MX2 class, Jay Hague was challenging the leading group hard in the opening moto until he made a mistake and damaged the bike which forced him to retire. But moto two he showed his true speed as he was in contention the whole race and brought the Crendon Fastrack Honda CRF250R home in third place.

In the first moto on day two Hague had to stop on the first lap when after he banged bars which moved his handguard. He got back going last then was brought down in a clash with another rider. After disentangling the bikes, he put on a determined ride from the back of the pack to take a well-deserved seventh place. Then in the final moto he mastered the tough conditions with an incredible ride. He was leading the MX2 class when he tangled with a 450 rider. He got going again in second place which is where he finished, less than three seconds off his first win of the year. But it was enough to give him third overall. 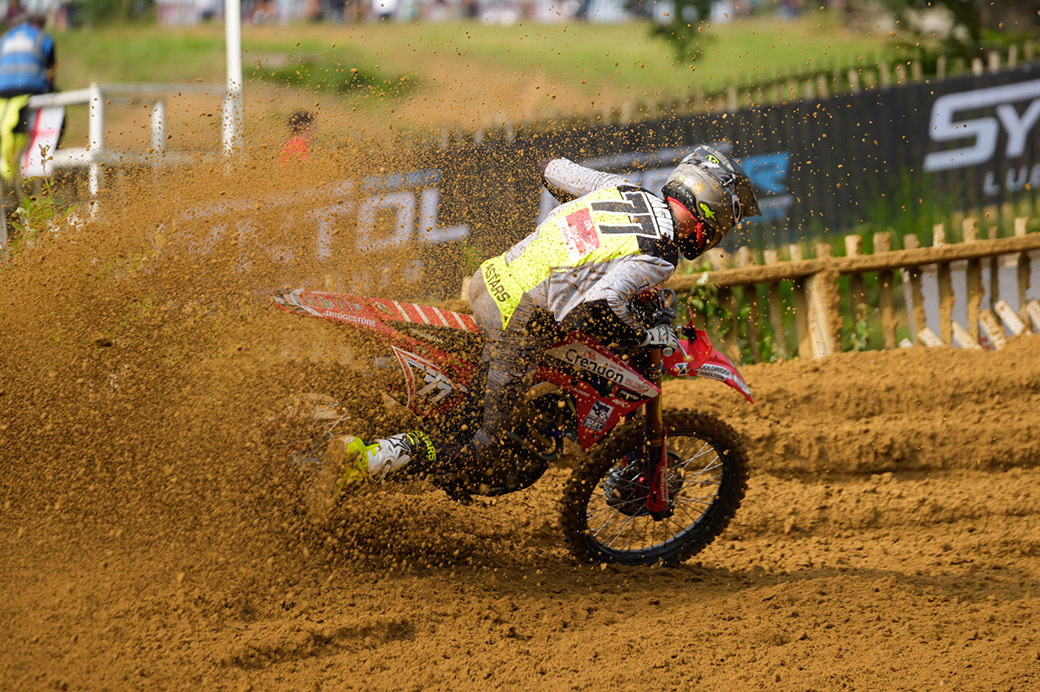 Jay Hague: “It was a good feeling to have Jake back, the three of us together under the Crendon Fastrack Honda team awning. And we all showed good speed. I could do with a bit more luck on my side!

“The first day started with a DNF when I had a freak accident go wrong, but I came back with third in race two. Then on day two my handguard got bent into my clutch and had to stop on the first lap, then another rider took me out. It’s motocross and it happens. The last race was lethal as the track was rain on blue groove. I was leading the MX2 class but came together with a 450 rider, and got back on to finish second. I’m happy with overall riding and fitness.”

Team Manager Dave Thorpe: “What a great day for the team as all three riders performed brilliantly. To have all of them on the podium in their first event together is obviously a great result. But what it really shows is how much work all the riders have put in during the last few weeks to really take themselves on to even greater results, and the mechanics who have gone the extra mile to make it happen. It’s been a great team effort and they have all amazed me.

“Obviously Jake has had to work hard to come back from such a bad injury but Tommy has also been working really hard in the run up to today to ensure he ends the season on top form and winning. And Jay has changed his programme and it is easy to see it’s paying off. Hats off to all of them.”