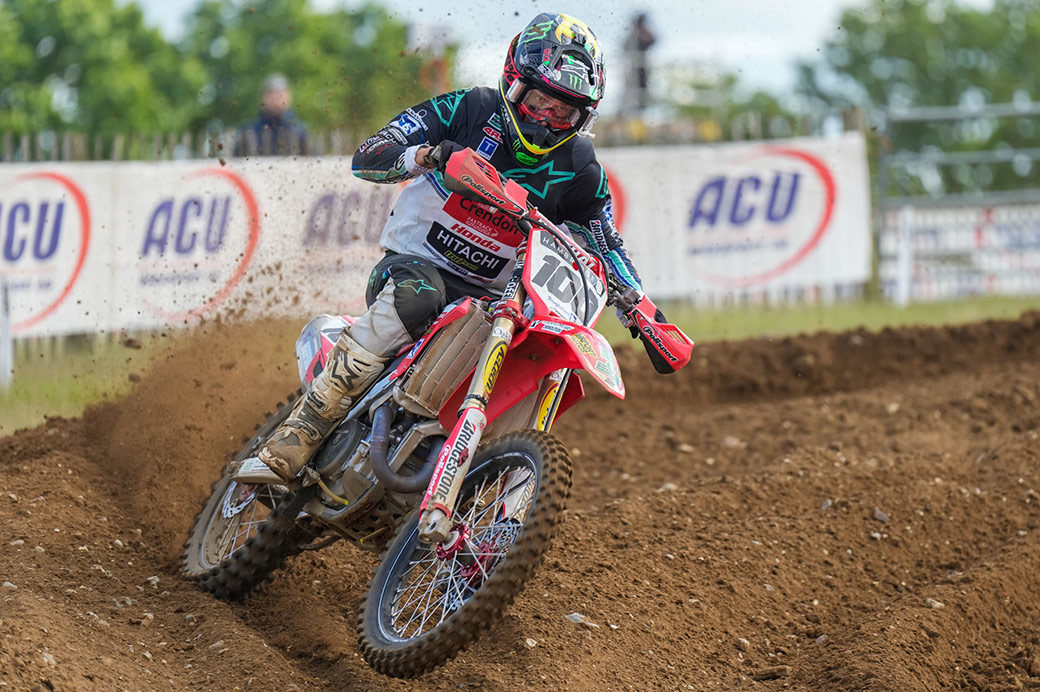 Crendon Fastrack Honda rider Tommy Searle once again took his Honda CRF450R to a podium finish at the MX Nationals round at the rough Lyng circuit in Norfolk on Sunday. It’s the sixth time this season he has been on the podium at national championship races.

Once again the 32-year-old set the fastest time in qualifying then took two second-place finishes for second overall which moved him up to third in the series – just a single point off second place.

In the opening moto, he was involved in a battle for second place with John Adamson and Brad Todd, which allowed holeshot man Harri Kullas to pull away at the front. By the time Searle got into second place, Kullas already had a clear lead so Searle brought the Crendon Fastrack Honda home in second.

The second race was a real thriller as Searle took the holeshot but was tailed by Kullas, and the pair put on an incredible battle for the lead as they pulled away from the pack. Kullas managed to get by and Searle pushed hard to attempt to make a pass, but made a mistake and slipped off. He remounted and came home second.

“A good day really, as I was fastest in qualifying then took two seconds,” Searle said. “In the first race I struggled to make some passes then when I got into second place it was a bit late in the race so I settled for second.

“In the second one, I had a good start and settled into a nice rhythm. In the past couple of weeks, I’ve been struggling with a cold and it hasn’t gone away so I didn’t want to put the hammer down too much. Harri passed me and I followed his lines a bit as he had some good lines in places.

“I wanted to attack at end of the race but I pushed the front. I made changes to suspension between races and it wasn’t quite as good. But we learned from that which is what it was all about today for me.”

It wasn’t such a good day for the team’s MX2 rider Jay Hague, making an early comeback after breaking ribs and bruising his spleen in a crash while testing three weeks ago. After finishing on the podium at the last MX Nationals round in April, the gritty 22-year-old was keen to race at Lyng – one of his favourite tracks – despite being far from fully race fit. He took the Crendon Fastrack Honda CRF250R to tenth in qualifying then in the first race was battling hard with the leading MX2 championship contenders for fifth place.

As the intensity grew, Hague went down which damaged the bike’s radiator and he had to retire. The pain of the injuries and the impact of the spill meant he reluctantly withdrew from the event.

Hague said: “I rode on Thursday for the first time and it didn’t feel too bad. But a practice track to race track is a very different thing, and this is one of the roughest tracks on the calendar. But I was having a good battle and then went down.

“I didn’t want to make it worse so I called it a day. The next race is 19 June so I have a few weeks to make sure I’m fully fit.”