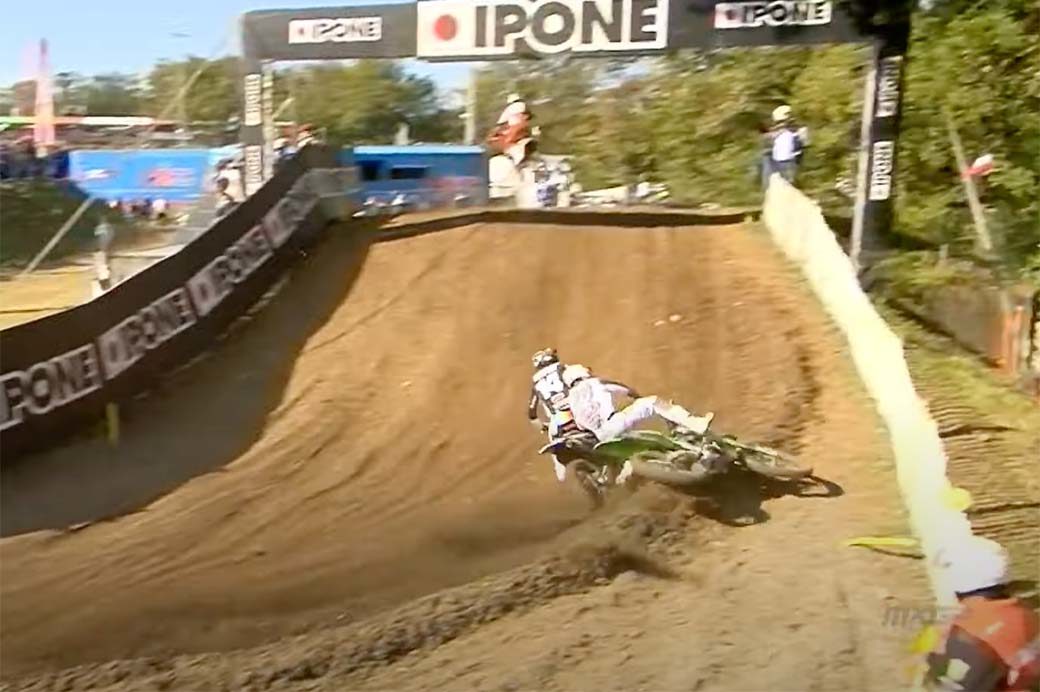 A manoeuvre from Jed Beaton wrecked a promising top-10 finish for Wilson Todd at the first French Grand Prix for two years, and Bike It MTX Kawasaki team boss Steve Dixon was less than impressed.

Early in the second MX2 race of the day, during an intense battle, Todd was holding fifth place with Beaton and championship leader Maxime Renaux in pursuit.

The two Australians exchanged places before the pair almost came together in mid-air. Beaton then put an aggressive move on Todd, leaving the Bike It MTX Kawasaki rider in the dirt and his KX250 in the fence, while the Rockstar Energy Husqvarna pilot rode off to eventually claim sixth at the chequered flag.

Todd tried to pick up the pieces after dropping out of the points. He clawed his way up to 15th for six points to add to his impressive 13 points from the opening moto.

Everything had started positively in France, with Todd taking the Kawasaki KX250 into seventh position in qualifying – just half a second off pole position. With a tight old-school track and a short run to the first corner, Todd was set up nicely for the points-paying motos.

In race one, a good jump out of the gate was hampered by a slight collision with a neighbouring rider, but Todd salvaged a top 10 round the first corner. The track was pretty difficult to pass on, but Todd still finished in a respectable eighth position.

Unfortunately for Todd, his points tally did not reflect another positive performance. It left team boss Steve Dixon wondering what might have been. “He was in fifth, and with the way he was riding, we were looking at a potential top three,” he said.

“Unfortunately, a battle with fellow Australian Jed Beaton, despite Wilson holding his line through a berm, Beaton collided with him, and it sent the bike off the track into a fence.

It is fairly uncommon for teams to get involved with on-track incidents, but Dixon backed his man on this occasion. “Looking back at the footage, it didn’t seem very sporting and could have resulted in Wilson getting injured.

Beaton has remained schtum on the collision, while Aussie race fans were left frustrated with their two guys coming together.

As for Todd, he’s not saying anything about it either – he’s just eying the next GP. “I’m looking to finish top 10 every moto [and] when I can, move into the top five. It all depends on getting out of the gate and how I’m gelling with the track.”

You can watch the moto two Beaton vs Todd vs Renaux battle below and make your own minds up.

GP riders are back in action again this weekend with the MXGP of Spain at Xanadu-Arroyomolinos on the outskirts of the Spanish capital, Madrid.