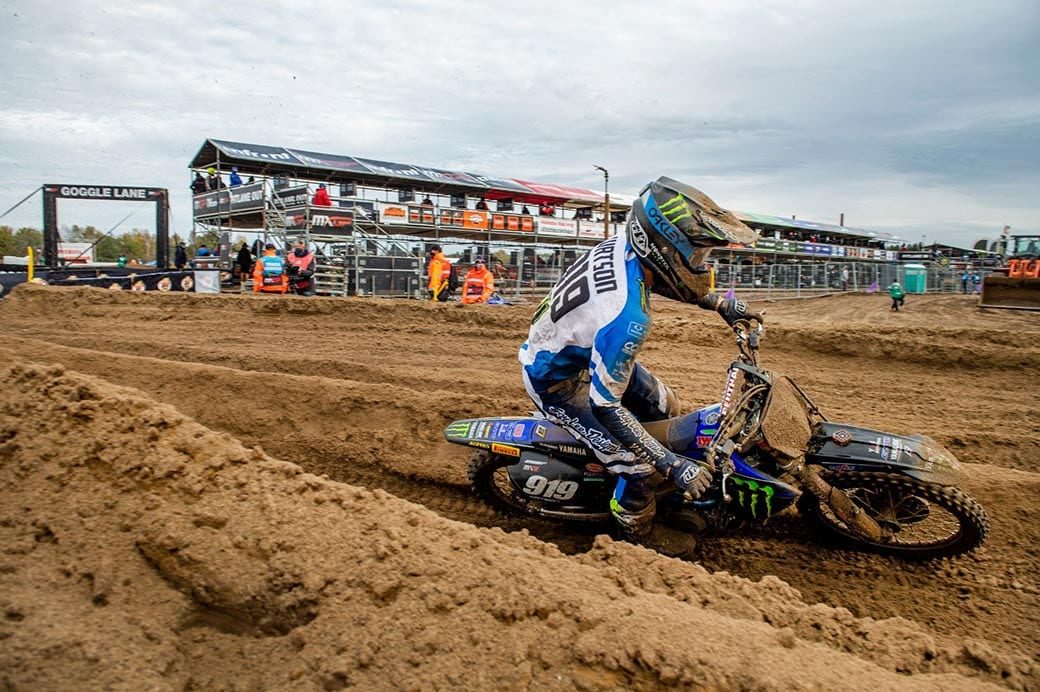 The #919 went 2-3 for second overall while team-mate Jago Geerts went 1-7 to secure the final place on the podium after a spectacular crash in race two.

The Brit was sensational as he carved his way through the field after starting mid-pack in both races. Two truly stunning rides with multiple mind-blowing passes saw the 23-year-old finish third and second for second overall – his best Grand Prix result.

Ben Watson: “I had a really good day. I achieved a personal best. To go one step higher on the podium feels really good. I took two terrible starts today and made it really difficult for myself, but I felt really strong through the races especially at the end, I could keep pushing to the flag. I was able make a lot of passes today. I was in such a rhythm today and feeling really strong. Overall, it’s been a really fun day.”

In the opening race, Geerts got a storming launch off the gate and powered his YZ250FM around the first turn to emerge as the early race leader. The young Belgian ran a consistently quick pace upfront but made a small mistake on lap seven and went over the bars. He remounted in second position, 13-seconds behind the current championship leader Tom Vialle.

After making a truly astonishing charge where he was lapping three to four seconds a lap faster than the front-runner, Geerts found himself right on the tailpipe of Vialle with five minutes remaining.

Vialle did his best to fend off the hard-charging Yamaha rider but could not match the Belgian’s blistering pace. Geerts secured his 12th race win of the season – 13th of his career – after making an incredible pass on his main rival with three laps remaining.

In the second and final race, Geerts pulled his fifth holeshot of the season but was quickly shuffled back to second position by Roan van de Moosedijk. The Belgian battled back and reclaimed the lead but suffered a spectacular fall on Lap-8 and was pinned under his bike.

After freeing himself from the wreck, Geerts dug deep to salvage seventh.

Jago Geerts: “In the first heat I was feeling really good and riding really good but then I made a small mistake, but I still came back to win the moto, so I was really happy with my speed and with my riding and feeling on the bike. In the second heat I could make a pass for the lead and then I had a really big crash, I don’t know what happened, but I got stuck under my bike. I got back up in seventh and finished there. It was a really difficult race but in the end, I am okay and I will get ready for Sunday here again.”