The 13th round of the FIM MX2 World Championship in Lommel, Belgium, was one for the history books with the Hans Corvers led Monster Energy Yamaha Factory MX2 team toasting an unforgettable first-ever double podium.

Ben Watson started the day with an emphatic race win – the first of his career, which he backed up with an inspiring ride back from a hard-hitting crash to finish fifth in Race 2 for third overall. Team-mate, Jago Geerts made amends to his mistake-filled first race with a hard-fought race win in the final outing to mount the second step of the podium. The Belgian was fourth in Race 1.

In chilly conditions, Geerts set the pace went Pole for the third time this season with a 2:02.264 lap-time in Timed Practice. Watson finished on the same second as the pole-sitter with a 2:02.715 for fourth.

Firing out of the gate, both YZ250FM riders were well placed inside the top-three. Watson had the initial advantage which was increased when Geerts crashed out of third while trying to find new lines.

As Geerts fought back from eighth, Watson applied pressure to the early race leader Tom Vialle and made a vital pass with 14-minutes left on the clock. The 23-year-old Brit, who is contesting his final year in MX2, never looked back and was able to celebrate a long-awaited race victory.

The rough and demanding Lommel circuit favoured the smooth and consistent. In contrast to Watson’s flawless ride, Geerts fell twice and made too many mistakes. The young Belgian had to dig deep to finish in fourth position.

The roles were reversed at the start of the second and final race. This time, Geerts chased Vialle around turn-one with his team-mate hot on his heels. Desperate to redeem himself on home soil, the #193 hooked a gear on his YZ250FM and made a pass for the lead on lap six. Controlling the race for the last 15-minutes of the 36-minute race duration, Geerts got the job done and was able to celebrate his 11th race win of the season – 12th of his career.

Watson lost one spot to SM Action M.C. Migliori’s Maxime Renaux on lap three before going over the ‘bars and crashing out of fourth position. The tall Brit remounted his YZ250FM put in an exhilarating charge back from eighth to finish fifth.

After celebrating an emotional race win, Watson has moved within two points of sixth position in the championship while Geerts remains in second position.

The Monster Energy Yamaha Factory MX2 Team will remain in Lommel until October 25th with the next two rounds of the FIM MX2 World Championship set to take place at the venue on Wednesday 21st and Sunday 25th.

Jago Geerts: “Today was not too bad. I made some small mistakes; I was not happy with how I was riding in the first race. I finished fourth. I made some changes to my bike and then it felt a bit better in the second heat, but I still think there is room to improve for Wednesday. I finished second overall, so I have to be happy with that, but I know my riding can be better. I will work on that for Wednesday and then we will have a new chance.”

Ben Watson: “It has been an amazing day, a day I will never ever forget. Again, I am third on the podium but after a race win, I’m really not going to complain. I am just so grateful to be there. I felt good in qualifying, I was enjoying the track and having a lot of fun. In the first race I was able to sit behind Tom Vialle and I saw him making a few little mistakes and at one point I just took the opportunity and then I led the race to the chequered flag. To get that race win, I can’t even explain the feeling. It is all I have worked for my whole life and it just felt like the top of the top, it was really amazing.” 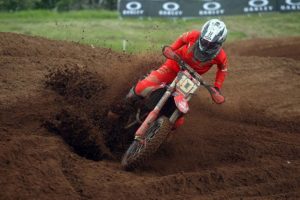