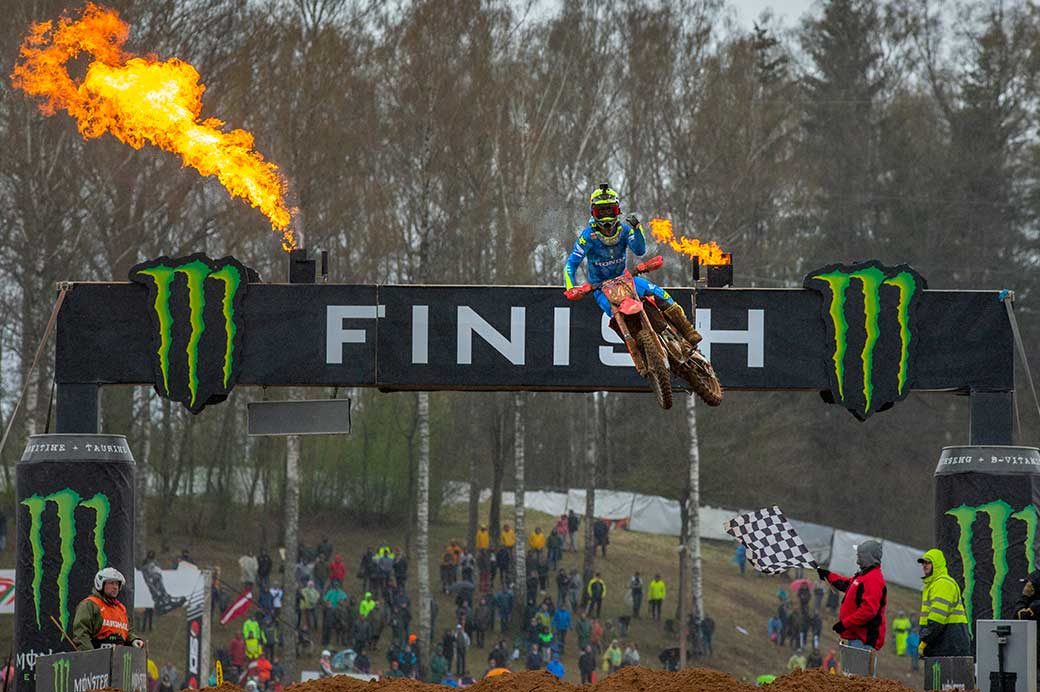 Team HRC’s Tim Gajser won both motos at the MXGP of Latvia, to extend his moto win-streak to five and increase his points gap at the top of the championship to an impressive 66 points.

On what was a miserably wet day at the Kegums circuit, 50km south of Riga, Gajser took control of both races in what was another impressive display of riding, in what were not very easy conditions. The rain had slowed the track down, providing more ruts and bumps to challenge the best motocross riders on the planet, but after winning the second moto in Portugal and both races in Trentino, the #243 proved he can handle any conditions with a perfect display in the wet sand in Latvia.

He swept around the first turn well inside the top five in motos one and two, and by the end of lap one, was in third and second place respectively. With every rider at their strongest, and the track at its flattest, the Slovenian rider took his time to figure out where to make his move, but when he did put the hammer down, he was into the lead after passes on two consecutive laps.

Race two went even better, as he swept around the first turn in second place, once again putting himself in perfect position to stalk his prey and make the move at exactly the right time. With the track conditions getting harder, this came earlier in the race as others struggled to maintain their speed and he moved into the lead on lap six. From there he controlled the race, taking the win, the overall and further extending his championship lead, to give himself more than a two-moto buffer to those behind.

Unfortunately, team-mate Mitch Evans didn’t enjoy such a successful day, as issues in the second and first corner gave himself an uphill battle to get inside the top 10. In race one, he was involved with another rider that left him on the deck and while he was able to move through the field to 17th midday through the race, another mistake dropped him back again and he had to settle for crossing the line in 19th. 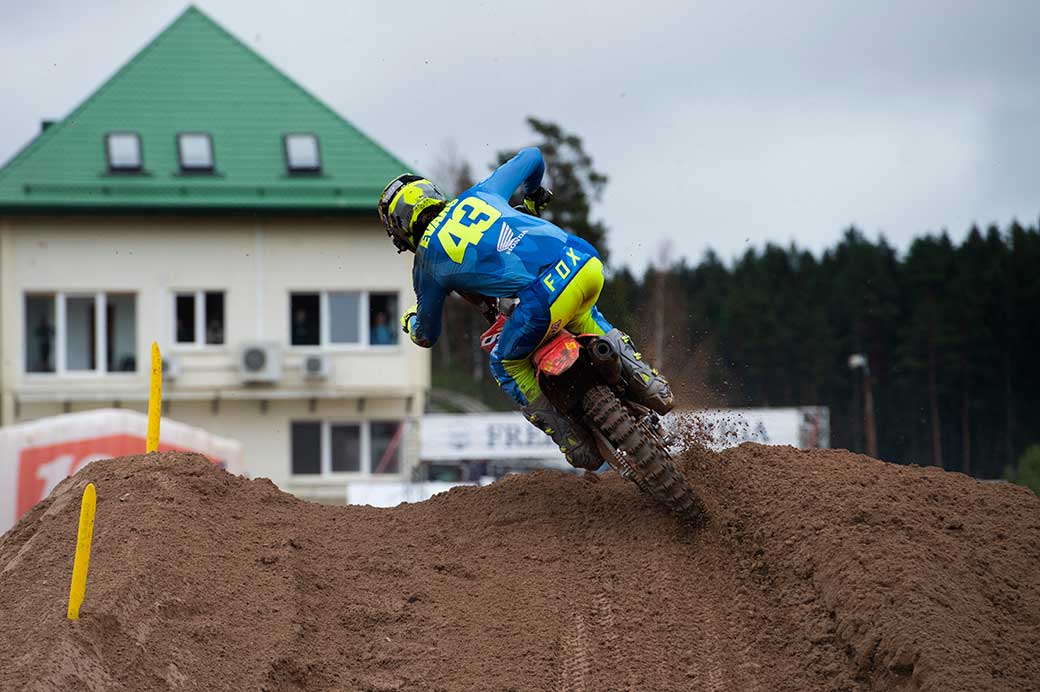 Things went slightly better in race two as he crossed the first lap in 16th place, despite a stall in the first corner. This gave him an improved platform to try and break into the top 10, and while he was able to get as high as 10th, he couldn’t quite hold on and eventually finished in 12th.

Tim Gajser: “I am really happy with how this weekend went, it wasn’t easy today as the track was a lot sketchier due to the rain, but I stayed patient in both races and made the passes when I needed to. I was also able to get two good starts on my Honda CRF450R, which I knew would be important, so that was good and that allowed me to not have to fight through the field. Everything is going really well right now and I’d like to thank all of Team HRC and all the fans online, and who come out to the races to cheer me on. It is great riding in front of passionate supporters and I really appreciate the atmosphere everyone creates for us riders to perform in.”

Mitch Evans: “Unfortunately, the first couple of corners let me down in both races as I was involved in a crash in race one, and then I stalled the bike in race two. This meant I was starting the races from right at the back of the field and it made things extremely difficult. However, I was pleased with my laptimes in race one early on, matching the guys at the front of the race and in then in race two I made a lot of passes as well to get near the top 10. They aren’t the overall scores I want, but I’m trying to take the positives from the weekend and I hope that I’ll be able to put in better results next round in Maggiora.”

HRC General Manager – MXGP, Marcus Pereira de Freitas: “It is so good to see Tim riding this confidently, and just really looking in command of the race. Even in third, it looked like he knew exactly when he wanted to make the passes and within a couple of laps he was in the lead. He had the fastest lap of both races and after his two moto wins, is now 66 points ahead in the championship, after just six rounds. Obviously there is a lot of racing to go, but we are very happy with how he is approaching everything and look forward to going to Maggiora.

“Mitch is still showing positive signs, and we feel he is close to being able to put it all together, however it just isn’t happening for him right now. We know he will keep working hard though and with another weekend off, we are confident he can take the next step to getting back where he belongs.”

Both riders now have another weekend away from the MXGPs, before they head to Italy for the prestigious challenge of Maggiora on May 7/8. Last year saw rain affect the motos, but everyone will be hoping for better weather as Gajser attempts to keep his win-streak alive, and maintain his stranglehold on this 2022 World Motocross Championship.