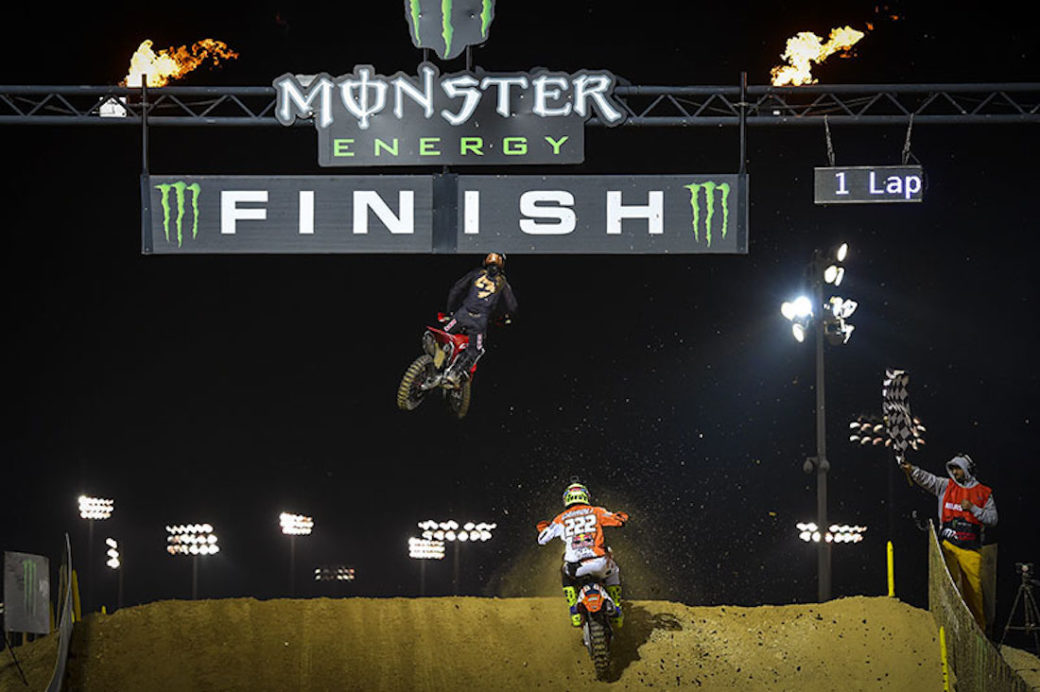 Year after year the FIM Motocross World Championship opener is one of the most exciting races of the season.

So far, it’s Team HRC’s Tim Gajser and Red Bull KTM Factory Racing’s  Pauls Jonass who have felt the excitement racing through the night skies here in Losail when they both won their respective qualifying races.

When the gates dropped for the first time this season, the reigning champion Tim Gajser shot out of them to claim a narrow holeshot over Red Bull KTM Factory Racing’s Antonio Cairoli. Behind them was the newly appointed Rockstar Energy Husqvarna Factory Racing rider Gautier Paulin. Pressure was put on Paulin throughout the race via Team HRC’s Russian rider Evgeny Bobryshev. However, the Russian was also feeling heat from the former champion Monster Energy Yamaha MXGP’s Romain Febvre.

Febvre looked like he was going to make a move but ended up going down instead, he was however able to remount and finish 7th. Replacing his 5th place position was Monster Energy Yamaha MXGP’s Jeremy Van Horebeek.

Meanwhile, up front the KTM of Cairoli was gaining ground on Tim Gajser, and even more so after a few mistakes from Honda Rider. As the race came to a close things were tight between the two, but at the finish Tim Gajser was the one able to come away with pole position.

To start the MX2 qualifying race the two Red Bull KTM Factory Racing bikes of Pauls Jonass and Jorge Prado Garcia launched off the new starting grid but the holeshot went to TM Racing Factory Team’s Samuele Bernadini. The Italian was followed by the KTM’s with Jonass leading Prado but the pair of teammates was split in the second corner by the Frenchman Benoit Paturel from Kemea Yamaha MX Official Team.

Suzuki World MX2’s Jeremy Seewer moved into fourth while Jonass and his KTM were able to find an opening and take the lead. Bernadini began to loose ground shortly after and was passed by Paturel then Seewer. The italian would finish 21st.

At the checkered flag, it was Pauls Jonass who lit the candles for the first time this year ahead of Paturel and Seewer. Prado managed to finish in fourth while young Australian Suzuki World MX2’s Hunter Lawerence rounded out the top five.