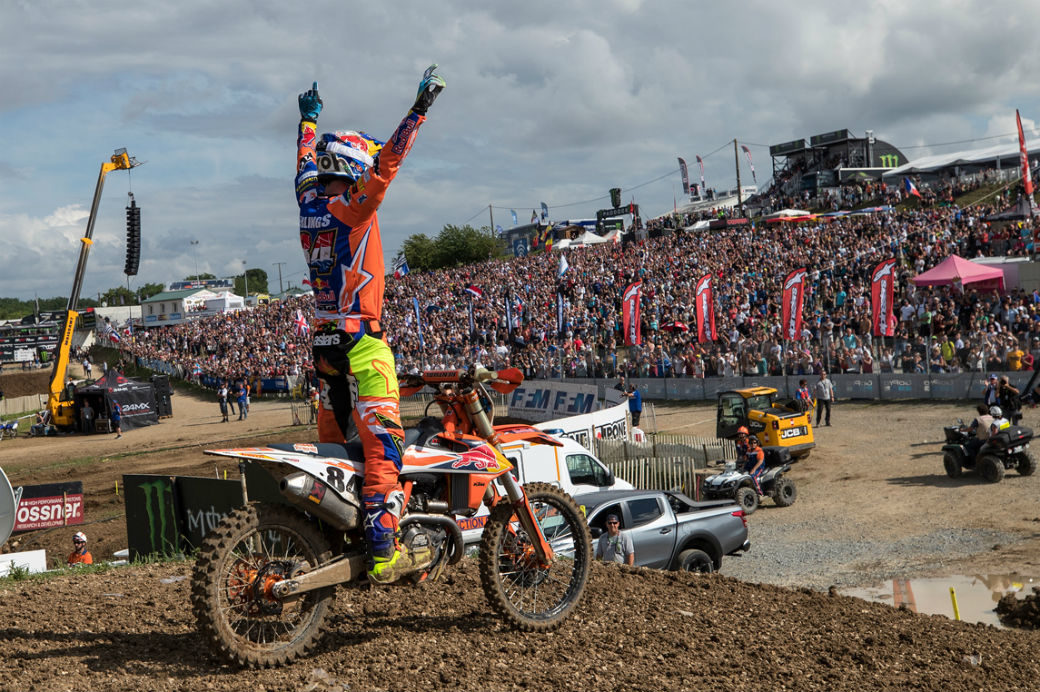 Red Bull KTM’s Jeffrey Herlings extended his lead at the top of the FIM MXGP Motocross World Championship standings after his fourth consecutive win, eighth of the season and seventh ‘double’ at Saint Jean D’Angely for the Grand Prix of France. World Champion Tony Cairoli was runner-up and Jorge Prado triumphed in MX2.

MXGP travelled directly from the UK to western France and to the hillside-set St Jean D’Angely venue that last hosted the Gallic Grand Prix in the summer of 2016.

Round ten of 20 meant the series reached the halfway stage and a rough and rutty terrain – softer and exaggerated after Saturday night thunderstorms – was still a stony test of climbs and drops and cambered turns. Thousands of fans crowded the adjacent hillside for a superb view of the action.

Jeffrey Herlings was unstoppable on his works KTM 450 SX-F to take a clear Pole Position on Saturday and a fantastic holeshot in the first moto on Sunday to again run free to a 15th chequered flag from 19 outings. In the second race #84 had to rally from a top ten start.

The Dutchman was determined, brilliant and relentless to close an eight-second margin and seize the reigns with only a few minutes to go. The success represented Herlings’ fourth at Saint Jean and meant eight consecutive years of spoils on French soil. The 23-year-old now has 75 career victories and has not finished lower than second from all20 of the MXGP motos thus far.

World Champion Tony Cairoli ended the Grand Prix as runner-up for the second week in a row. The Sicilian fought with teammate Glenn Coldenhoff for third position in the opening moto and was less than a second away from Clement Desalle after the 30 minutes and two laps.

Later in the day #222 attempted to make a breakaway and seemed to have a comfortable cushion as leader, but his lap-times slowed in the last six minutes and Herlings powered through. Cairoli had been unable to train due to a fragile left knee after the British Grand Prix seven days earlier and admitted he lacked the stamina to push all the way to the line.

Coldenhoff equalled his second-best classification of the season with 5th in the first moto and then banked a sixth place in the second dash. The Dutchman completed yet another impressively solid Grand Prix and gave Red Bull KTM three riders in the top six.

Herlings retains the red plate for the seventh fixture in a row and has a 62 point cushion over Cairoli with Coldenhoff in 7th. Herlings and Cairoli have appeared together on nine of the ten podiums in 2018 MXGP.

Herlings said, “It was a really cool weekend, a beautiful one actually. That track was special and I hadn’t really seen a place like that until I was fifteen! So it’s nice to have so much experience now. The fastest pre-qualifying time meant I could control the Heat race on Saturday and then have an advantage for the first moto gate pick, which helped towards that holeshot.

“I could control the race and not use much energy. I was a bit late with the gate in the second moto and I really had to work for it! It was a difficult one because Tony had a big gap when I had already got to third: it wasn’t easy on this track.

“I’m looking forward to the next one now because Ottobiano is one of my favourite tracks. The plan is to go for the podium at least and hopefully fight for another win.”

Cairoli said, “I feel good but this weekend was not one of the best. Last week I hurt my knee and could not train this week. When you are at this level if you already miss a couple of days of riding then you really feel it.

“Jeffrey is very fast at the moment so you cannot really rest and you always have to be on the pace. The track was a bit more muddy and harder in the first moto compared to the second. I had a bad start in the first moto and tried to come through the top 10 as quick as possible. It was okay, but we shouldn’t be making these mistakes at the start.

“In the second moto I tried my best to stay at the front but got very tired in the last ten minutes and Jeffrey was making very fast laps. I made a few mistakes and he came very close. Second is OK, but we want to work to be more competitive and hopefully we can make it next week.”

Jorge Prado moved to within one win of becoming the most successful Spanish motocrosser in the history of the FIM Motocross World Championship after his 3-1 scorecard in France meant a seventh career victory and his fourth of 2018. The 17-year-old rode his works KTM 250 SX-F through the ruts and across the bumps with style in the second moto to ensure a sixth chequered flag of the season.

World Champion Pauls Jonass couldn’t find the same rhythm and flow in the first race and had to settle for fourth. The Latvian aced a fantastic holeshot at the beginning of the second moto but slipped out of the lead on one of the tricky Saint Jean uphills. This incident meant a long charge back through the field and #1 reached a satisfactory 6th spot for fifth overall.

The title duel between the duo tightened with a new gap of 16 points in Jonass’ favour as the defending number one kept the red plate for a tenth successive meeting.

Prado said, “The weekend started well on Saturday and I felt good on the bike and the track. It was quite muddy this morning and my start wasn’t the best in the first moto but I passed a lot of people.

“I hit a stone at one point and had a small crash but recovered right away and was happy with my riding, especially in those conditions where last year it was a big struggle for me. It was a shame that Pauls crashed on the first lap of the next race…but it was good for me! I kept the lead until the end…it was a perfect weekend. I’m really happy with our work.”

Jonass said, “Yesterday went really good but the track changed a bit today and I didn’t get the best start in the first moto. I struggled to pass some guys and completely lost my rhythm, I wasn’t flowing on the track. I wanted better for the second moto but unfortunately lost my front wheel in a corner when I wheelied and the bike had each wheel in a different rut!

“I rode back to sixth so I got the best out of a bad day. I will have some extra motivation for next week. The second race last Sunday was one of the best of the year and it is sometimes up and down in motocross.

“I’m happy with that holeshot in the second moto at least: it’s been a while! We lost a couple of points today but there is still a long way to go. I’m not too worried about it but just a bit disappointed.”

From the hard-pack to the sand: the Grand Prix of Lombardia at Ottobiano south of Milan will welcome MXGP next weekend.